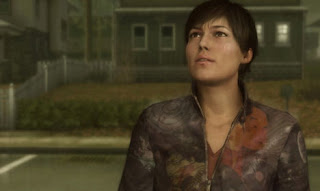 Above: Madison Paige, in a rare moment of not being exploited.
At last, my review of Heavy Rain is up at thephoenix.com. Much has been said about this game so far, both positive and negative, and part of the reason I spent an entire post talking about some of the game's flaws was to clear the decks for this uncommonly positive review. There's still mention of some of the egregious problems, but in the end I thought Heavy Rain succeeded at what it set out to accomplish, and it did so with aplomb.

Is Heavy Rain important? Is it the future of games? Is it the death knell for games as we have known and loved them for decades? Is David Cage a huge d-bag? I've read all these questions and more, and I don't know the answers to any of them. I don't think they matter. It's silly to try to predict a game's importance or impact in real time, and useless to discuss its creators by proxy. All you can say is what playing this game felt like at this time, and to me it felt momentous.

That's not to say that I want Heavy Rain to be the future of games. I would hate to lose games that are purely play -- not that it would happen anyway. The lesson other developers should take from this game isn't that people are clamoring to play only slow-paced, talky adventure games with no sense of humor. But they should realize that there is greater range for the medium than more shooters, more racing games, more RPGs. That they can try to make games that can be described in ways besides, "It's just like this other game, except..."

The next game I played after Heavy Rain was Battlefield: Bad Company 2, and while it's clearly well made, I couldn't escape the feeling that it existed not because somebody at DICE had a bold and daring vision for shooters, which they were willing to go through hell and high water to share with the world. I think it exists because previous Battlefield games made a lot of money, and Call of Duty games have made a hell of of a lot of money, so let's go ahead and try to move the FPS ball down the field another inch or so and see how much money we make.

Again, that's fine. I'm not saying all developers should stop making games that people already know and love, and that have a guaranteed sales base. I am saying that a few more should follow Quantic Dream's example and just freaking go for it, whatever kind of game they're trying to make. When you do that, maybe your game isn't perfect. Maybe it isn't even any good. But if you nail it, you might end up with something like Heavy Rain.
Posted by Mitch Krpata at 9:00 AM

What's most interesting to me about Heavy Rain is that I can agree wholeheartedly with you that the game was momentous, and be glad that it exists and that I played it, without actually having liked it.

I thought the game was a failure, but it was the noblest failure I can remember playing, and it got us talking about (mostly) all the right things.

One note: you can reload your game and replay it, if you select an earlier chapter and choose the "save" option. You just have to go through a lot of rigmarole to get back to the part you failed. I did this twice. My gamer instincts simply refused to accept my mistakes as anything other than failure that needed to be corrected. I may have completely missed the point of the game, although I'm still not sure whose fault that was.

Bad Co 2 may not have the story investment that Heavy Rain has, but it was clear to me that DICE went through pains to make it a better game, story and all, than the first game.

I found it fun and silly and interesting, just like the first game, but the environments and missions, while not always sensible and well thought out, seemed less random.

It wasn't just a collection of levels, it seems like more of a game.

As far as Heavy Rain is concerned, I didn't play it, won't be anytime soon, so I can't speak about it. But I can say I've experience many momentous occasions, in games, books, movies, and even TV shows.

They were important, new, and sometimes made me cry, scared the living daylights out of me, or just made me think for days after experiencing them.

But they weren't the end-all, be-all experiences. They last more than more experiences, but I can always count on something just as momentous happening again, sometime in the future.

I apologize for the many errors in my previous post. I should have spent more time making sure it was error free!

Unknown said...
This comment has been removed by a blog administrator.
3:53 PM

Unknown said...
This comment has been removed by a blog administrator.
1:37 AM