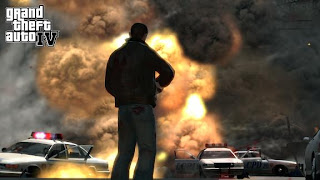 I was disheartened to read an editorial in the Boston Globe this morning called "Nihilism at $60 a pop." As I've said before, I think there are plenty of legitimate criticisms to make about a game like Grand Theft Auto IV. The problem I have with these types of tirades is that they always seem to spring from a place of total ignorance, unsupported by facts. This editorial is typical. The editors make some wild assertions about the content of the game, but nowhere do they cite anything specific in support of their argument. It's just fear-mongering. Let's take a look at it, piece by piece:

I'm not so far into the game that I can say for sure, but in my experience to this point there has been a single reference to human trafficking in the main character's past, no beheadings, and no rapes. There has, however, been gang warfare. One for four ain't bad. Wait, yes it is.

I'm also confused by the implication: Are they saying those things don't exist outside of Grand Theft Auto? Or are they saying we live within the video game? Since a couple of the things they mentioned don't actually happen within the game, it's tough to say. In the meantime, there is more than enough of that stuff to go around in the real world, unfortunately. Which, again, is not to say that such content couldn't be fair game for criticism -- just that this is a sensationalistic way to start, and doesn't inspire much confidence that the rest of the piece will be educated or fair-minded.

Remember, this is only the lede! We're already off to a bad start.

Commercial movie theaters are expecting slow sales this weekend because the new edition of the addictive video game, released Tuesday, is expected to keep millions of youngish American males encased in their bedrooms, gleefully blasting people's heads off. The Entertainment Software Ratings Board, a voluntary industry group, has given GTA's new edition an M rating: "not suitable for players under 17." But there is little monitoring of video game sales, and few believe that a determined 14-year-old couldn't get his hands on the game.

It's interesting that they mention the possible loss of box office revenue this weekend, because you can bet your bottom dollar that the paper would never run an editorial condemning an R-rated movie. But why? There's little monitoring of ticket or DVD sales, and few believe that a determined 14-year-old couldn't make his way into the theater. Yet no one doubts that R-rated movies are intended for adults, even if they do hold inordinate appeal for young males.

I wonder what more the industry is expected to do here. The ESRB voluntarily rated the game and clearly marked it as inappropriate for minors. Retailers don't mess around with this stuff, either -- I'm 26, and I've often been carded at Best Buy when buying an M-rated game. Target and Wal-Mart keep their games in locked cases, and I believe both check IDs as a matter of policy. This isn't sufficient?

And, again, the characterization of "blasting people's heads off" is inaccurate. You can shoot people in the head if your aim is good, but heads remain attached. Triviality? Maybe, but when the purpose of the editorial is to sensationalize the content of the game, I think it's necessary to point out the hyperbole.

This poses a dilemma: No defender of free expression, such as a newspaper editorial page, can easily support censorship. And unlike cigarettes, guns, or alcohol, the danger even to minors of possessing debased video games is a murkier science to prove. Ultimately, parents must be the gatekeepers of the media their children consume.

We at least agree here. There is no data -- none -- that games are harmful to minors, much less that games turn them into zombie killing machines, so the Globe doesn't even attempt to cite any. Although they seem to believe otherwise, this does not strengthen their argument.

Still, the GTA-IV experience is particularly insidious. The very features its fans love - high-quality graphics that immerse the player in a convincingly realistic world - raise the stakes. The targets are not space aliens or cartoon characters but police officers, taxi drivers, strippers, and the occasional innocent bystander. The violence, especially toward women, is unusually gratuitous. There is nothing about GTA-IV that can be considered remotely "socially redeeming" - one of the tests the courts use to judge whether material is obscene.

I agree with the basic argument here, but again the specifics are misleading. Part of GTA's power comes from the familiarity of its setting, and its emphasis on verisimilitude. It's one of the many good reasons why the game is rated M. The characterization of Liberty City's inhabitants as "targets," though, shows the lack of understanding of what the game is about. To the extent that anybody in the game could be called a "target," you'd have to be referring to the drug dealers and gangsters whose elimination is often the objective of a mission.

But cab drivers? Strippers? Innocent bystanders? They exist to populate the world. You can harm them, but it is entirely your choice as the player to do that. This is what seems to bother editorial boards so much, and the implications may be worthy of discussion. Why do so many players get their kicks in this game by breaking the law? Unfortunately, answering that question would require a high-minded, academic look at the issues, and you just can't cram one of those into the short space of an editorial. It's easier to call the game "insidious" and pretend that you get points for going on killing sprees.

Furthermore, I'd say that I'm also bothered by some of the depictions of women in the game. It seems to have a preoccupation with women as strippers and prostitutes. The argument that GTA is sexist is a lot stronger than most of what the Globe is trying to say here. But they have to mischaracterize it and pump it up into something it isn't. Again, I haven't played through the whole game, but so far every bit of mandatory violence I've encountered has been between men. Is that more acceptable? I don't know. But it's a more accurate description of the game.

The other familiar obscenity test is whether something violates "community standards," and here the game may already be lost. Every time another rap song or video game pushes the envelope, it becomes the new standard.

"Community standards" is an awfully nebulous term -- but then, this whole article is vague and unhelpful, so why not cap it off this way? I do want to make one humble argument for the community value of video games in general, though. Multiplayer games, especially, provide a social outlet for people of all ages and abilities. They give people a meeting ground, and a chance to engage in both cooperation and competition. They encourage strategizing and decision making. In the case of Grand Theft Auto, almost everything you do involves a trade-off. Yes, you can mug somebody for money, but then the police will come after you. If you want, you can also drive a cab and pick up fares. This is the power and the appeal of video games -- the player gets to choose how to play, albeit within a pre-defined framework.

If we're going to write these pearl-clutching editorials bemoaning the depravity of video games because we think one or two people might be inspired by them to go bonkers, can't we also acknowledge that for millions more they provide a real benefit? With the advent of online play, they're a way for friends to connect across long distances. For people with disabilities, they're a way to feel empowered. For so many of us, they're a wonderful storytelling medium that engage us emotionally, intellectually, and morally.

We wouldn't ban Grand Theft Auto. But the death and maiming in Liberty City are too close to the real lives of too many children. To package that for profit and entertainment is the real crime.

Well, no, it's not a real crime. It's not even a fake crime, like everything that happens in the game. Grand Theft Auto is a crime story, like The Godfather or untold numbers of paperback books with shiny raised lettering on the cover. Again: Kids probably shouldn't play this game. But violence and sex as a part of popular entertainment goes back as far as entertainment itself. Somehow, we've survived. We've even thrived.

I do imagine the author typing out that last line, leaning back in the chair and cracking his knuckles, and congratulating himself on having finally solved every problem in the world.

Damn it, couldn't resist one sarcastic dig. I was doing so well!

It never stops thrilling me to think that there are people who think that because a video game has good graphics, people will think it's real.
People like the writer at the Globe banned Ginsberg's Howl claiming that it was unsuitable for children. The thing is, most kids couldn't really play GTA games. A fourteen-year-old isn't a kid, we're trying them all the time as adults these days, and they're about to get a real car. Was anyone as innocent at 14 as anti-video game people say?

Fox News is the worst about this stuff. As far as GTA IV goes, best I can tell (from watching the boys I live with play it constantly) it's by far the prettiest and most entertaining GTA yet.

I don't like any of the GTA titles, the gameplay isn't my cup of tea. But why do media always makes a scapegoat out of the game developers/publishers for every social problems young people faces? They're just doing their jobs, and they made GTA titles with adults in mind. Shouldn't parents and game retailers do their jobs too, to monitor what the "kids" are playing?