There's nothing that a hundred zombies or more could ever do 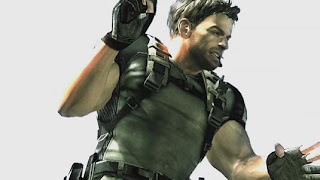 Above: A Resident Evil 5 image I haven't seen all over the damn place.
Here you go: my review of Resident Evil 5 is up now at thephoenix.com. I feel like I've said so much about this game already -- for almost two years now, actually -- that it's almost a relief to finally be done with it.

This is usually the part where I say more, but I'm sick and I've got nothing. The plague metaphor rings ever truer!
Posted by Mitch Krpata at 9:00 AM

Uh-oh. Your review seems to have attracted fan ire.

On the other hand, I fuckin' love it! There's something to be said for Capcom's ability to make an action game distinctly gamey.

Taking to the hordes of angry bad with a friend is extremely satisfying, especially on the higher difficulty levels where an enemy that somehow routes you from behind DOES prove to be a worrisome threat. A swipe later and you're at half health, or worse, pinned from behind and getting bottled, pub-style.

The Mercenaries mode provides for that instant thrill. Jump in, blast and get out, and it proves more tactful than The Horde of Gears of War 2.

Horde provided the big guns, a repeating cast of enemies and little incentive to keep fighting through.

The Mercenaries, on the other hand, asks you to juggle combos, prioritise your weapons, ensure you've got enough time remaining and make use of limited resources such as explosive barrels.

Higher grades at the end also yield rewards such as those little ball figures and points feed into tactful benefits in the form of unlimited ammunition for weapons.

And, no matter how trite and stereotypical the story, the cutscenes were pulled off with lavish polish.

Unlike so many, I don't have an immediate and unfounded dislike for quick-time events, either. They're an easy, and effective, way for developers to transition from one environment to another quickly whilst maintaining a solid pace. I'd argue that they were far more effective in RE4, especially during that knife fight with Kruger which was, though difficult, rather satisfying and providing the player with a level of control for a duel that could not have been enacted using the player control mechanics. Running from tentacles into the bridge of the ship in RE5, however, helped move location in order to continue the boss fight elsewhere.

Yes, RE4 was more intricate and well-rounded, especially in regards to the boss fights. Where RE5 centres on large beasts that must be, on a number of occasions, taken down with a gatling gun, RE4 plays with Leons movement speed and need to stop and shoot to create tension. Fighting the El Gigante, where Leon's size meant playing to his nimble advantage, ducking between the legs of the beast, and keeping on your toes. And when fighting that huge guy that turns into an acrobatic insect, you must have a solid aim.

Actually, RE5 is lazy when it comes to boss battles. None of them was a particularly tense encounter, save for maybe that with the lesser insectoid enemies, the Reavers, which have a specific weak point that is hard to hit and an instant-death move if they get too close.

However, it was still a satisfying adventure on the whole. No, I don't believe the developers pulled off to great extent the frightening contrast between light and dark, but then again, it isn't exactly a horror game, now is it?

The move to mimic the Gears of War control scheme, the implementation of a second character, these all indicated that in preview rounds.

If you were expecting a horror game from the outset, I think that your hopes were misplaced.

Returning to my earlier point, what Resident Evil 5 is, is the embodiment of the Capcom arcade ideal in a third-person action-adventure, where replay is encouraged through ever increasing difficulty modes, a points based ranking system and the desire to climb leaderboards.

Admittedly, I'd like RE6, which there will inevitably be, to return to a more confined, slower and more horrific bent. But that was never what RE5 was going to be.

It was fun enough. I just thought it was unimaginative, and not a good Resident Evil game. (I realized, at long last, that I am tired of Albert Wesker and Umbrella.)

Your comments about its action game bona fides are well taken and I don't really disagree, but I definitely have to disagree when you say "If you were expecting a horror game from the outset, I think that your hopes were misplaced." I don't think it's out of bounds to come into RE5 with certain expectations. I mean, it's a Resident Evil game. This is a horror series -- along with Silent Hill, it's the horror series. I can go anywhere for shoot-em-up action, but Resident Evil has historically been one of the only places to go for legit horror. This game is so far off that track that it may as well have had a different name.

There's a precedent in Capcom history for spiking RE sequels that get too far off the rails -- that's what got us Devil May Cry, a situation that I think worked out well for everyone involved. And there are non-canon games, like The Umbrella Chronicles, that are much easier to take for what they are. It's obviously never a good idea to start any game with an overly rigid set of expectations (just imagine trying to play Resident Evil 4 that way), but this game has been sold as a horror game with a noble lineage, and that's just not what it is.

Thinking I may skip this one, but more importantly, Achievement points for the Toto reference.

"I mess the brains down in Africa"?

"They're eating brains down in Africa" is the best I could do.

Also, "Gonna take a lot to kill these dudes in Kijuju / Something like a hundred rounds or more would probably do"

The fact that this game just came out and you're already sick of talking and thinking about it depresses me. We have so much hype for so long before and just after a game's release that there's hardly any time to chew on it once it's out. I don't have RE5 yet, but I will likely pick it up soon. If I buy it three weeks after the street date, am I way LTTP?

(I realize you didn't care much for the game and that's probably a big reason why you're sick of talking about it, but still.)

Mike, in general I agree with your point. The way we treat games as disposable, as though their release dates were actually "sell-by" dates, is a bummer. In the case of RE5, though, I just feel like I've personally expended so much mental energy on it over the past two years that I've got nothing left in the tank. Which, I'll admit, is probably a lie.

It'll be different for every person and each game, and can see where you're coming from.

I'm just currently bummed at the old time vs. backlog issue at the moment.