Games of the decade: Gears of War 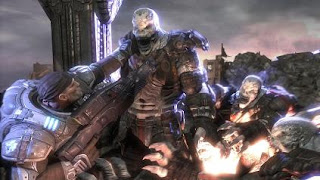 Gears of War
(2006, Xbox 360)
You always have to be wary of alleged system sellers -- the games that the fanboys are already proclaiming the greatest of all time well before a console has come out, and the reason only an idiot would not buy their favored, someday game system. Gears of War was one of those. Well before the release of the Xbox 360, partisans spoke of it with reverence. Even as it slipped to fall of 2006, a year after the console's debut, we were assured it would be well worth it. Naturally, I assumed the worst.

Gears of War is a remarkably well produced game. In its way, it's as unimaginative as every other monochromatic, dystopian shooter, but the execution is at such a high level that it all seems fresh and new. Even the game's biggest draw, the cover system, wasn't exactly an innovation. It had been tried in a few games before, never fully successfully. Gears showed how it was done. And afterward, everybody else got on board.

That fundamental mechanic was reinforced by the larger game design: in Gears, you are always outnumbered and outgunned. Often you have to fall back and play defense, and even when you're pressing into enemy territory it is only yard by precious yard. The characters are designed to look like the biggest and baddest dudes around, but when the bullets fly they put their heads down just like anybody else.

Gears also plays on a more topical fear. From the premise, in which the Locust race emerges from subterranean caverns to ravage human civilization, to the ongoing and unpredictable appearances of emergence holes, the thematic subtext of the Locust is that they're all around you. They haven't traveled from across the ocean or from a distant star. They're here already. They've been waiting to strike. In my review, I made a half-hearted attempt to paint Gears as a post-9/11 game for this reason, and I still think that's probably accurate. Frankly, I wish I'd had the balls to go all the way with it and see what happened.

Gears 2, although it was bigger, better, and more badass, was missing some of the desperation and grit of its predecessor. However, Horde Mode was a blast, and something I also hope to see other games copy in the future (some, like Left 4 Dead 2, already are). As Tim Rogers said in his epic review, "Let’s go ahead and mint a brand new law to be obeyed from here on out by all those seeking citizenship in the kingdom of videogames: if your game isn’t fun enough to be enthralling in the context of an endless mode, nothing else about it means shit."

More on Gears of War:

Labels: Games of the Decade, Gears of War, Xbox 360

Totally concur. Say what you will about the dialogue and characters, the cover system was a total and utter game changer.

I didn't realize how much I loved hunkering down behind chesthighwalls 'till Gears came along.

Not to mention that it brought us the ultimate expression of the Unreal engine, arguably the most important (or at least ubiquitous) single piece of software gaming tech of the last ten years.