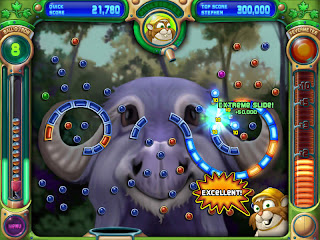 Above: Witness the instrument of your doom.
Sometimes in this life, there are certain inconvenient truths that you have to acknowledge, or else they'll destroy you. The earth's changing climate is one. The viability of Sarah Palin as a 2012 presidential contender is another. Even harder for me to acknowledge, over the years, has been my love of -- or, more accurately, compulsion toward -- casual gaming. I'm not talking about today's handholding in AAA titles, or even party games like Rock Band. I'm talking about simple, basic games that are usually free to play, except, of course, for the price of your soul.

Recently a friend loaned me his defunct iPhone. It has no sim card, but I can use it to check out some of the apps I've been missing, such as the instant classic Fox Smoking Pipe. But I haven't connected to the apps store yet. I haven't played some of the interesting games he'd already installed on the phone, like Doom Resurrection or even Canabalt. No, I've been playing Peggle.

Do you need me to explain Peggle? You've probably heard of it. (It's been out for a few years -- you've probably played it.) It's essentially pachinko: the game board is full of pegs that light up when a ball bounces off of them. The twist here is that the pegs vanish after each shot. Your job is to clear the board of its relatively few orange-colored pegs. You can do this with the help of certain enchanted shots (fireballs, auto-aim, etc.), but mostly it's a matter of carefully setting up a shot, then watching it go to hell as angles and pegs you never accounted for make the whole thing feel a lot like luck.

Good god, is it addictive. Made by PopCap, the fine folks who brought you web-game classics Bejeweled and Bookworm, Peggle starts with a simple idea, gives it a few twists, and then polishes it to blinding. The luck aspect gives and takes away -- a bucket that slides back and forth across the bottom of the screen will grant you a free ball if your shot ends up there. Getting saved from a bad bounce is like reaching into your coat pocket and finding a twenty.

The presentation is pretty slick, too. Cartoonish graphics and humorous interstitial text is always welcome, but the end-of-round event is brilliant. As your ball approaches the last orange peg, the camera zooms in, the game slows down, and the ball takes on a comet's tail. The ball can still miss at this point, and if it does, it's agonize. If it hits, "Ode to Joy" bursts out of the speakers and the ball sends out multi-colored sparks, before falling into a bonus-point bucket that erupts in fireworks.

A couple years ago when I argued against the terms "hardcore" and "casual" to describe gamers, this is what I meant. Peggle is a "casual" game by any definition. I'm not against describing it that way. But I am certainly not a "casual" gamer by virtue of playing it. In fact, it consumes me in a way that many recent "hardcore" games have failed to do. I agonize over my launch angle. I consult online videos of high-scoring shots. I forget to pick up my pre-ordered copy of Splinter Cell: Conviction because Peggle is waiting at home.

For all the high-falutin' talk about games needing to mean something, and the imperative for narrative and play mechanics to mesh, and whatever the hell else I say to sound smart, sometimes -- most times -- it's only about having fun. There's a reason great-looking console games come and go, but my FreeCell game count keeps rising. In other words, I play games like Battlefield and ask why; I play games like Peggle and ask why not.
Posted by Mitch Krpata at 9:00 AM

Try to remember to eat and evacuate appropriately. Oh, and if you cannot get a challenge, check Youtube.

Plants vs. Zombies and DoodleJump are both awesome on the iPhone.

Peggle, well, it's not awesome anywhere but it's better on PC or Xbox than it is on the iPhone IMO.

Hilarious. I've been hooked on that Peggle mistress myself, and she is cruel. It's a nice diversion from blood and gore and easy to just pop in. There is some strategy involved, but yes, a lot of luck.

Love that last sentence. I have a totally junk food relationship with all these kinds of games as well. It's cheap, it's easy, it's fast and it feels good, so I go for it.

The "Why not?" question always sneaks up on me though after a short addictive burst, when I can't help but think there is no nutritional value.

Maybe a similar motto should apply then to these sugary sweet empty-calorie games: everything in moderation. A five hour stint in Mass Effect or Heavy Rain feels like a journey. The same five hours in Peggle, to me, would feel like a regrettable binge.

I have yet to submit to the charms of Peggle, simply because I know it will consume me like it has you, Mitch. I will resist!

I tried Peggle, and it never hooked me. Bookworm and Bejeweled, on the other hand... oh Lord have mercy.

found your site on del.icio.us today and really liked it.. i bookmarked it and will be back to check it out some more later. I invite you to see my post, I hope you will find interesting too.

Just came across this blog, and have been trying to find more active ones with little success of late. That said, I've liked this one so far, and have to say that Peggle was an immediate hit - not just with me, but my wife (a very casual gamer), 2 of my 3 kids and even my dad.