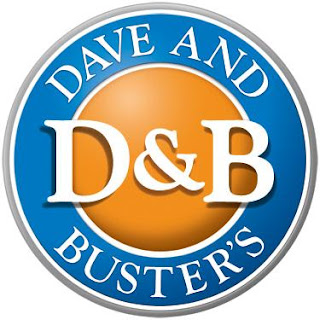 Above: After 10 PM, the "DB" stands for "douchebags."
This past weekend, I went to a Dave and Buster's for the first time. As a chain restaurant-cum-video arcade, it's actually not too bad. The chicken fingers were crunchy, and the beers were tall and cold. Not much more you can ask from a casual dining establishment.

The arcade portion feels more like a casino. In my experience, arcades are dark and dingy places, with hidden corners you're better off not exploring. Dave and Buster's is big and airy, cacophonous and bright. Trying to eat dinner while watching the attract mode of dozens of arcade machines is not easy.

What was interesting was that the place clearly was not catering to gamers in any real sense. It was all about flashy peripherals. Almost every game they had was either a driving game or a shooting game. If you could sit down on it, even better. There were no fighting games, no beat-em-ups. The only game I recall seeing with a traditional joystick-and-buttons control scheme was Virtua Tennis 3, and even that was on a huge, fancy cabinet. 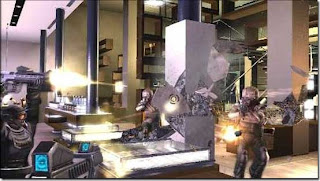 Razing Storm
So I mostly played shooters. It's amazing how, even though they're nearly identical on the surface, the quality can vary so much. Razing Storm was a good one, a Time Crisis clone from Namco that had a much better gun and fully destructible environments. I also liked Sega's Rambo game, which interspersed clips from the movie with fast-paced shooting. (Fun fact: In the game's first chapter, which takes place during Rambo III, you're assisting the freedom loving, god fearing men of the Taliban. That worked out well.) 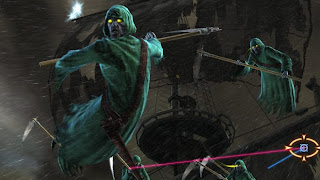 Deadstorm Pirates
Best of all: Deadstorm Pirates, another one by Namco. This was one where you get inside an enclosed space that seems to be made entirely out of subwoofers. You're shooting ghost pirates, not unlike those in the Pirates of the Caribbean movies, with some kind of high-powered harpoon gun. Deadstorm Pirates distinguishes itself with a simple and fun co-op feature. When you and your partner cross the streams, you get a damage multiplier. There are also mid-mission QTEs that take advantage of a built-in ship's wheel. Good times. 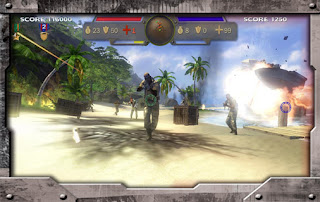 Paradise Lost
The worst shooter I played was called Paradise Lost, which seemed to be based on the original Far Cry. Hard to say why it wasn't good, really, except that it was bland to look at and bland to play. The better shooters on offer all had some kind of twist, whether it was Razing Storm's destructible environments, Rambo's rage meter, or Deadstorm Pirates' FREAKING GHOST PIRATES.

I also played Daytona USA. They had 8 cabinets networked. Amen.

What's weird about Dave and Buster's is how hard it is to know how much money you've spent. It's just one abstraction on top of another. You can get certain entrees with a game card for a discount. I got chicken fingers and a $20 game card for $23.99. In other words, dinner was four bucks. Good deal, right?

Well, I have no idea. That $20 game card turned out to be worth 100 credits. And all the games cost a different amount of credits, which were rarely round numbers. Skee Ball was a mere 2.4 credits, while Guitar Hero arcade cost 8.0.

Then you add tickets to the equation. If you're already struggling with the connection between your $20 game card, your 100 credits, and the 5.7 credits you just blew on the claw grabber, now try figuring out what your tickets are worth. For one thing, each ticket is actually worth two tickets. Why would that be confusing? It says so right on the ticket.

So after you spend all the credits on your game card and earn a pile of tickets, you can head to the "winner's circle" to redeem them for valuable prizes. Granted, we played a lot of video games, which don't reward players with tickets, but we also played a fair bit of Skee Ball and those weird coin-dropping games, and had a pretty fat stack when all was said and done. Turned out we had earned about 270 tickets.

What does 270 tickets buy you at Dave and Buster's? A little can of Tootsie Rolls and a thing of Pop Rocks. If you've been following along at home, that means we bought about fifty cents' worth of penny candy with our $40 of game cards.

Obviously, this is why Dave and Buster's is still in business. Well played, gentlemen.
Posted by Mitch Krpata at 9:00 AM

Dave and Busters is amazing. We have one in Utica,mi. Great place to drink and have an awesome time. Expensive food though..

Wow! I amazed that was really an a brilliant business plan I really enjoyed your blog so much.