The weapons of Hot Pursuit 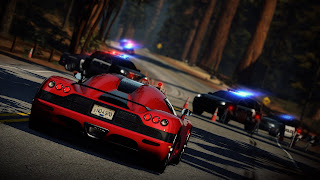 Above: Roadblocked.
Need for Speed: Hot Pursuit shares a little of its DNA in common with games like Mario Kart and Wipeout. It's less fantastic than those games, but at heart it's a combat racing game, just as they are. Playing through career mode requires you to unlock all of the weapons available to you, so at first you may think that Hot Pursuit, like Burnout before it, is more about trading paint and using your car as a battering ram than about blasting your foes with high-powered armaments.

This turns out to be only partly true.

There are two essential things to understand about the weapons of Hot Pursuit:
Those two facts make all the difference. Unlike Mario Kart, Hot Pursuit doesn't provide an on-ramp for unskilled racers by gifting them devastating weapons the further behind they fall. Unlike Wipeout, there are no uber-powerful weapons against which there is no defense. And unlike both of those games, the weapons you have at the start of the race are all you will get. There is no magical box, floating above the racecourse, that will re-stock your ammo for you.

Both cops and racers can use spike strips, which drop on the ground to slow down or wreck somebody behind you. Spike strips are the easiest weapon to use, especially late in the game when they are upgraded to the point that they can cover a wide swath of the road, and you drop two strips in one shot. Spike strips aren't very powerful, but they're great for slowing down somebody who is trying to ram you, or lock on with an EMP.

Cops and racers can also both use EMPs, bursts of energy that temporarily disable their targets. EMPs take some time to charge up, and need to be locked on in order to work. The EMP is the most "gamey" of the weapons available -- a lot like the Electrovolt in Wipeout. Activate it, and a white box will appear on your screen that you must keep centered on an opponent. You need to keep your target in view for several seconds (lock-on time reduces with each upgrade). Not terribly powerful on its own, the EMP is best used in conjunction with something else, like a road block, a sharp turn, or a well-timed collision.

Things diverge from there. Racers have a jammer, which shuts down all of the cops' tech, including their weapons and their on-screen maps. It's a great way to evade an EMP. Racers also have a turbo boost, which accelerates them to ludicrous speed for several seconds.

Cops can call in a road block, which is set up some distance down the course. As the road block power is upgraded, the road blocks gain more and sturdier vehicles, which can cause a racer to slow down or crash, but every road block has a weak point that racers can easily penetrate. The last tool in the cop's belt is the helicopter, which tracks down racers and drops spike strips in front of them. Forget its effectiveness: nothing beats barreling down a road at 180 mph, hitting a button, and seeing a chopper blast overhead with its searchlight blazing up the road.

All of the weapons collectively bring to mind a game of Rock, Paper, Scissors. Say you're a racer and a cop has an EMP lock on you. You could try to lose him through pure driving skill. You could use your jammer. You could hit the turbo and try to get out of range. Each of these comes with a cost. If your fancy driving doesn't work, or even if it does, you might cost yourself first place. If you use your jammer, you're still in sight and susceptible to crashes and other weapons. If you hit the turbo, you'd better hope there's a straightaway up ahead and not a series of S-curves.

This kind of mental calculation happens dozens of times in every race, all while you're navigating hairpin turns at top speed. You're trying to follow the route, keep an eye on your HUD for hazards, avoid oncoming traffic, and check your rearview for anybody speeding up behind you, all while trying to game-theory your way through your arsenal in the scant seconds you have to do something, dammit! It's enough to short-circuit your brain.

For all this, your car's chassis is still your greatest weapon. It's the one that'll last the whole race, provided you don't wreck, which is no gimme. Driving well is also a better alternative than using your weapons, but it's so much harder than pressing a button to instantly escape. No matter the weapon -- spike strip, EMP, road block -- you can dodge it without reaching into your bag of tricks. Even the racer's turbo power is only as useful as your ability to steer while using it.

If you aim to wreck another car, there's no subsitute for a good, old-fashioned ramming. Most of your weapons merely chip away at your foes' health. You either need to scavenge a takedown, or focus relentlessly on one opponent for your weapons to do much good. But if you can get behind them, hit the boost, and plow into their rear fender, you'll take big chunks off their health bar. It's the only way to go -- until they drop a spike strip, that is.

There have been lots of combat racing games before this one, which is why I started this post by comparing Hot Pursuit to two well-known ones. But none have ever been as deep in their execution.* Never in this game will you find yourself fumbling along, waiting to get bailed out by a lucky drop. Never will you fire your weapons willy-nilly instead of concentrating on the race.

Hot Pursuit has earned accolades for its mind-blowing races and the addictive Autolog feature, but who expected its combat system to be this exacting, even subtle? Forget Mario Kart -- maybe Street Fighter is the better comparison.

*Bold claim unsupported by evidence in post.
Posted by Mitch Krpata at 9:00 AM

Maybe I was one of the few gamers who found the weapons in Blur to be fun. Sure there was nothing brand new about them but they were a little more balanced then the randomness of mario kart. I do appreciate bringing skills to the weapons cause it can be fairly frustrating to be in first and have you lose at the last second because of the blue shell.

Hey Mitch,
I hope this isn't spammy but I'd very much like to invite you to join us again for our (very late) best of 2010 Coint and Plick poll.

I'd love to have yer input.
Give it a peek!

Hope to hear from you!