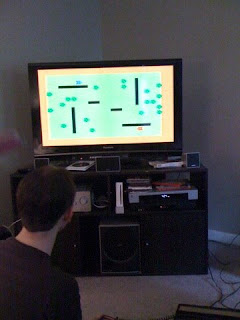 Above: Yes, you can hook up an Intellivision to a plasma screen.
What do you get when you combine classic video games, piles of junk food, and a bunch of aging nerds? Besides a funky odor that lingers for days, I mean. You get the retro game bash -- a lifetime's worth of video gaming compressed into one day.

The day before the Fourth of July, some old friends convened and brought with us an Atari 2600, Intellivision, Sega Saturn, N64, Dreamcast, and backwards-compatible PlayStation 3. To ensure an authentic retro experience, we also loaded up on Doritos and Mountain Dew, just like we did when we were teenagers. Playing through a few decades of gaming history, while fueling up on caffeine and powdered cheese, yielded some surprising lessons. In particular:

Let's start with the good stuff. First of all, I was surprised that it worked at all to hook up an Intellivision and an Atari 2600 to a plasma TV. The Intellivision even looked pretty good. The Atari suffered a bit from screen stretching, which we probably could have tweaked a little in the TV's settings.

Here's a bit of 2600 trivia that's sufficiently interesting to warrant its own paragraph. Did you know that you can plug a Sega Genesis controller into the 2600 and use that instead of the original joystick? Mostly a curiosity, unless of course you've misplaced your joystick. Which we had done.

Super Puzzle Fighter II Turbo, for the PlayStation One, is still a great game. Looks nice on an HD screen, too, even on a PS3. No smearing or other ill-advised "improvements" to the visuals. The only problem with this game is that everybody knows that Donovan has the best drop pattern, so everybody plays as Donovan all the time. In the HD remake, the designers tweaked the drop patterns for the sake of balance, which should have made the whole thing better. Only it didn't.

Sega's first-party games were completely badass. We didn't have time for the racing games, but Virtua Fighter 2 and both Virtua Cop games are phenomenal -- no nostalgia required. VF2 still looks great. The backgrounds are sparse, but the character models are colorful and fluid, locked in at 60 fps. And unlike so many fighting games that require a master's degree just to learn the movesets, anybody can jump right in and understand what they're doing.

The Virtua Cop games, too, are swift moving and fun. They don't look quite as good as Virtua Fighter, simply because there's more happening onscreen, so the level of detail is lower. The action is fast and furious, though, still the best designed lightgun shooting I know of. Of note is the car chase sequence in the first level of Virtua Cop 2, in which you can shoot out the tires of enemy cars and watch them flip into the air.

Sega's Dreamcast was well represented as well, if a little less "retro" than some of the other systems there. Crazy Taxi is still a fun romp, although arcade mode starts to seem repetitive to me even after just a few minutes of play. And Soul Calibur, a game I never spent much time with, looks phenomenal on a standard-definition television. You could have told me it was running on a 360 or a PS3 and I'd have believed you.

One big surprise: San Francisco Rush, for the N64, is a game I loved back in the day, but wouldn't have thought would hold up. Big mistake. N64 games in general have not aged well in the graphics department, and scanning Rush's race tracks for shortcuts is no easy task if you're not sure where they are. But racing through the familiar courses -- and hitting those huge jumps -- is as fun as ever. Mostly, that's because of the physics: ding your car just a little and it'll twist and turn in unpredictable directions, leading to insane crashes and the occasional death-defying recovery. It's a blast.

Tomorrow, I'll talk about some games that didn't hold up so well, including some surprises.

"Here's a bit of 2600 trivia that's sufficiently interesting to warrant its own paragraph. Did you know that you can plug a Sega Genesis controller into the 2600 and use that instead of the original joystick?"

Yeah, the connectors are exactly the same.

It was the supbri mortgages that got us into this mess.

Can't wait for the post on your third lesson ^_~

Speaking of 64 games, the other day I was playing Goldeneye with a few of my friends on an N64 we had set up. None of us could remember where anything was on most of the maps, and we got lost on the more maze-y ones. Facility was still great, though.

Of course, this being the Nintendo 64, one of our four controllers was almost broken, so every round we would have to change who got to try and get it to work. It's a shame the controllers have been so fragile; I'd like to go back and play more of my own N64 games.

Oh man, I remember trying to go back and play Goldeneye a couple months ago. It was basically unplayable, as far as I was concerned. Between the archaic controls (it's hard to imagine a time when we actually used the one stick for moving forward/backward and turning) and abysmal framerate I felt like I was struggling to control my avatar moreso than actually trying to shoot some fools. Some games are better left in your memories.

God I loved me some Crazy Taxi back in the day. I could dig that making a remixed return on XBLA.

Sounds fun! I'm planning to do something similar as soon as I finish the pinball project in the garage.

Be sure to get yourself a copy of Warlords for the 2600, and two sets of paddles. It's a fantastic multiplayer game, and always a hit during gamer nerd gatherings.