What video games have in common with fantasy sports 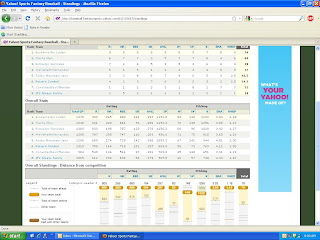 Above: The new high-score list. And also some straight-up bragging on my part.
Two video game genres I've never gotten into are sports and strategy. The finer details of sports sims elude me (unlike, say, Bill Harris, who times his virtual running backs with a stopwatch). I can't tell if a sports game is realistic or not, and even if it were, that wouldn't help me play it. In a strategy game, or a strategy-heavy RPG, the top-level thinking -- resource management, planning ahead, multi-tasking -- doesn't track with the way my mind works. Yet for several years now, I've been hooked on a game that combines the most challenging traits of both of these genres: fantasy baseball.

We don't tend to think of fantasy sports as video games, not even as a part of the increasingly misnamed "casual" realm. Yet it's hard to imagine how else you could classify them. In the same way that pen-and-paper role-playing games have informed generations of electronic RPGs, old-time rotisserie baseball provides the basis for an electronic version that millions of people play. All the complicated stuff is automated, like updating players' statistics and trips to the disabled list, just as Final Fantasy keeps track of hit points and status ailments. The player needs only to set his lineups, and give himself the most favorable matchups possible.

Creating a balanced fantasy baseball team is a lot like putting together a successful party in an RPG. You can't overload your roster with too much of one kind of player. Imagine trying to plug through the first Final Fantasy with four fighters and no mages. It would be impossible. The same is true of fantasy baseball. If you load up on beefy sluggers with high strikeout rates, you might lead the league in homeruns, but you'll almost certainly be near the bottom in batting average and stolen bases. Both the player draft that starts the season, and later roster moves and trades, require this sort of give-and-take.

As with video games, you can put as much or as little effort into fantasy sports as you want, and still have a good time. There are the obsessives, who are intimately familiar with their pitchers' splits. (You may have a pitcher who throws well during the day and in his home park, for example, but serves up meatballs during nighttime away games.) There are the active players, who make sure all the spots in their lineups are filled each night, and none of their starters are spending any time on the DL. And then there are the people who check in once in awhile, just to make sure their team still exists. Everyone can do it their own way -- though it's generally more fun to play with people of similar ability.

Fantasy baseball has a little more in common with games. If you enlarge the graphic atop this post, you won't just see the stats from my historically dominant season, although I certainly encourage you to look at those. You'll also see several offensive team names. If you were to visit the main league page, you'd also find reams of trash talk, an area in which, again, I have had an historically dominant season. In that respect, fantasy baseball is not so different from Halo.

(And, yes, Penny Arcade did tackle this subject last week.)
Posted by Mitch Krpata at 9:00 AM

Great, insightful post, etc. etc., but now I gotta know who you had on your team and how you fared.

Okay, yeah, you had a pretty good team. Damn.

While beating the original Final Fantasy with four fighters would be nearly impossible, some people have done it with only one and no other characters.
Because they are insane.
Also, I cannot help but chuckle at "Brosama Bin Laden".

Ah, to find someone who actually wants to hear about my fantasy baseball team! I've had the usual churn in players over the course of the year, but for the most part this was my core roster:

I don't know how I ended up with all those guys, either.

I also traded Tim Linecum for Evan Longoria about halfway through the season, which turned out to be a mistake because it barely helped me, while helping the dude I traded to quite a bit.

yeah, even for an eight-team league that line-up is stacked. although nobody expected Lind, Ibanez, or Josh Johnson to be as great as they've been.

I don't know if I'd trade Lincecum for anybody, but if I did Longoria would be at the top of the list. I'm sentimental about Lincecum, though; he's been one of my keepers since he was in the minors.

Hi... Looking ways to market your blog? try this: http://bit.ly/instantvisitors

I don't play sports games at all but I do like strategy...to a point.

When I was young with spare time I could play Civilization or other similar games for hours/days/weeks etc. Now I can't

Which means Civ Rev at King or lower difficulty is all I can really handle nowadays.

Anything more than that takes far too much time, too much patience, and too much understanding for me.

But Civ Rev is approachable with plenty of eye candy and is just plain fun!

Hey, four fighters is the one party that got me through the first Final Fantasy! It has to do with slightly out-of-tune mechanics though - multi-hits and defense rating gets exponentially out of whack, and since there is no "back row" and monsters hit at random, my mages would always die in one or two hits at the hands of some meaningless random encounter mob.

Final Fantasy 1 is doable with any four-class party if you grind enough. That's the thing, though: you can't grind between games to level up your players in fantasy baseball. (Although in Mitch's case, you don't need to. Damn, dude.)

That is a truly inspiring lineup, which looks like you went with the "outfielders are interchangeable" strategy and hit Yahtzee with the ones you got. I think Bartlett won a lot of fantasy leagues for people this year.

I'd been trying to put a post like this into words for some time...glad to see you do it for me, much better than I would have.