Aquaman, you go... talk to some fish! 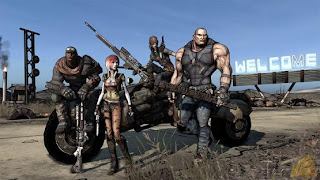 Above: Borderlands characters arranged in ascending order of usefulness to the team (l-r).
Every heroic alliance has a weak link. The Justice League has Aquaman. The Avengers had Ant-Man. And the League of Extraordinarily Gentle Men has me.

Oh, you don't know that last one? That's the name we've given to our trio of Borderlands players. Except for a short single-player session the first day I had the game, I've played almost exclusively with the LXGM. Without going too deeply into detail, since I've still got a review to write, it's clear that Borderlands is an entirely different beast when you're playing with others. By yourself, it's a grind whose occasional rewards are overshadowed by lots of problems. With a group, not only do those problems go away, but character building starts to matter much more. Your skills affect those of your teammates, both in combat and character development. You may equip a class mod that boosts everybody's EXP by 20%, or grants everybody ammo regeneration.

Your skill trees also become more important. Each class can develop along three different tracks, so you can mix and match a few abilities, or specialize. Because the LXGM had two Soldiers, me and Bob, we decided to spend our action points developing unique tracks. Bob has been upgrading his medic skills; I've been going the support route. We're around level 30 now, and the stuff Bob can do is impressive. His turret casts a healing aura that quickly regenerates teammates' health. It has a chance to instantly revive downed players.

The best thing Bob can do is shoot healing bullets. He simply blasts away at teammates, and their health increases with the damage his gun deals. The ability doesn't require specific weapons or rare ammo. He can damage enemies and heal teammates in the same burst. It's helpful during firefights and after -- when the medic is playing, you don't even need to carry around medkits. This might be the most useful skill I've ever seen in a game of this type.

As the support gunner, I've felt a little bit less indispensable. My turret regenerates team ammo instead of health. Here's a little secret about Borderlands: you will never run out of ammo. Enemies drop it in spades. It's the most common thing you find in chests. It's cheap to buy at stores. And some teammates don't even need it.

The third member of the LXGM, Greg, has been doing yeoman's work as two different characters. At first he mostly used the Berserker, whose special skill is not using guns. His fists can pummel enemies into goo. It wasn't uncommon to follow Greg into an area and see his character standing there, screaming, on top of a pile of crushed corpses. All that without firing a single shot. Then he started playing as a Hunter, who probably would need ammo if he hadn't found a legendary revolver that drops most enemies in one shot, and, oh yeah, regenerates bullets.

Borderlands does let you respec, for a fee. You can buy back all your action points and redistribute them as you see fit. We certainly don't need a second medic. I could pump up my guy's firearm abilities on the infantry track, if I wanted to. But I think I'll keep him the way he is. There's dignity in making your choices and sticking to them. My Roland is a support gunner. He was born to provide ammo to people who don't need it. Damn it, that's what he's going to do.

Besides, every team of great heroes needs its useless character. That's one thing I know I can excel at.
Posted by Mitch Krpata at 9:00 AM