The minimalism of Uncharted 2 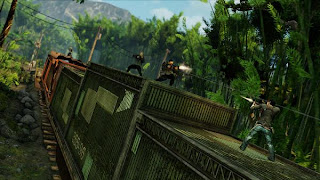 Above: You have to listen to the notes they aren't playing.
By now, you may have heard about a little game called Uncharted 2: Among Thieves. You've heard how cinematic it is, how lifelike the graphics are, and how large-scale the action sequences are. It's all true. Sony's VP of Big Action Scenes is not lying to you.

Nobody seems to have put their finger on the true reason for the success of this game, though, which is what isn't there. Lots of games have great production values, with shiny graphics and booming audio bespeaking a massive budget. Yet most of them never achieve greatness, and while the reasons are different in every case, often it comes down to one or two root causes. Either the interface is overly complicated or unsuited to the in-game tasks (like Killzone 2, say), or the designers are reluctant to cut things they've worked so hard on even if it would improve the whole product (a good example of this is Prototype).* Naughty Dog nailed both of those things.

The interface would probably still be hard for a gaming neophyte to pick up, but for veterans of 3D action-adventures, it's remarkably elegant. For some reason, other developers force players to hold down a button to make their character run. Not only does that miss the entire point of having analog control sticks, but it also commits one of the buttons to an unnecessary function. Even with all the buttons on gamepads today, they're still a limited resource. By using the analog stick to make Nathan run, Naughty Dog frees up the face buttons for more important uses.

Another thing Nathan can't do is crouch -- at least, not on his own. If the player presses the button to take cover, and the nearest bit of cover is low, he will duck behind that. Again, it's a sensible solution, based on a realistic accounting of how players will want and need Nathan to move. I was a little surprised at first that I couldn't press a button to make him crouch, but after about an hour of gameplay I realized that it wasn't actually necessary. I was grateful to be able to clear that out of my brainspace while I was playing.

Nathan does a lot of climbing, swinging, and shimmying, which always has the potential to be a bear. Some games have done this stuff better than others. Although a lot of people liked the magnetic approach of inFamous, I thought it was intrusive. Uncharted 2 has a little bit of auto-assist too, but it's much more subtle. Nathan will turn and grab a ledge if you walk off it, but not if you run or jump off. Instead of being sucked toward grabbable objects in mid-air, most of Nathan's jumps are directed in such a way that you can't help but move in the right direction to begin with. This is the advantage of the linear, scripted approach over a more open world.

Those are some of the smaller things that Uncharted 2 does right, and they have an outsized impact on the experience. For the most part, you can forget you're even holding a controller while you're playing this game. But Naughty Dog made more brave choices with the gameplay, and I don't think they're getting credit for how much they left out.

I can only imagine how hard it must be to design video games. Imagine that some members of your team are working solely on your game's water. It needs to look right: it should reflect the light, be capable of different levels of transparency, maybe have some sand swirling around. The fluid dynamics need to be programmed just right, too, because you have a fantastic idea for a boat level. So your artists and programmers bust their asses for months, and they create the best water ever seen in a video game. What do you do?

After all, you can't let their hard work go to waste! Sure, it doesn't make sense to have water mains bursting in every single level, and that boat chase you had in mind didn't really work out, but you'll be damned if you don't share this wonderful water with the world!

That's all wild speculation on my part, but surely you've noticed things like this. Yes, it can be very hard to let go of things you've done. Unfortunately, this mindset often results in games repeating themselves. Things that are fun at first get old. Things that aren't fun at first become obnoxious. And things that don't belong in the final product are still there, because nobody had the courage to let them go.

There's not an ounce of fat in Uncharted 2. Most interesting things only happen once. Sure, there are your standard rooms full of crates to duck behind while shooting at dudes, but the shootouts never last very long, and they're often a waypoint en route to something more interesting. You hurtle forward, never getting bogged down. Enough wrinkles are introduced that the vanilla gunfights really do feel different from the ones on the train, which again are different from the ones in the trucks. The same is true of climbing sequences. Some are slower paced, allowing you to enjoy the environments, while some are more about racing against crumbling infrastructure. You don't typically repeat anything.

I don't doubt that Naughty Dog had to leave some stuff on the cutting room floor, some of it probably quite good. Somebody there must have had a laser-like focus on the final product. They took out all the right things.

*I should clarify that I liked both Killzone 2 and Prototype, the latter quite a bit. That's why they're instructive comparisons to Uncharted 2: They're well made, big-budget games that are fun to play, but are flawed in ways that could have, and should have, been addressed early in the process.
Posted by Mitch Krpata at 9:00 AM

A good example of the "put water everywhere" behavior of game designers can be found in Broken Sword 3.

Crates. Who enjoys pushing crates? Half of the game's puzzles revolved around pulling and pushing crates, so you could climb into the next room, obviously because they put effort (and money) into programming a nice box-pushing mechanic.

The game would have been both shorter and better if they would have released it without a single box. The only purpose of the goddamn boxes was to remind you that you weren't exploring a real world, but a game designed one.

Beautiful. I agree 100% and this is one reason Uncharted 2 impressed me so much while the original simply felt good, but overrated. Another game I felt had the same fat trimming approach was God of War 2, which I consider to be even better than Uncharted 2 (it gave GoW2 a run for its money, but didn't top it as far as I'm concerned).