Majin and the Forsaken Kingdom 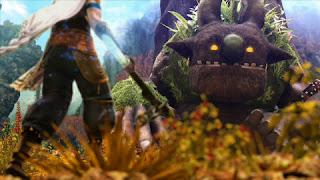 Above: It's a good thing he's a vegetarian.
My review of Majin and the Forsaken Kingdom is up at Joystiq. This was a nice surprise. Definitely not a game I'd have sought out for myself, but I was glad to have played it.

I focused primarily on the mechanics in this review, because they're interesting, they work, and they overcome most of the game's problems, instead of being overshadowed by them. It didn't seem worth mentioning the bizarre voice acting, because it is so bizarre that it is the first thing I'd expect a reviewer to mention, and I like to keep things fresh.

But, so you know, the voice acting is weird. You talk to a bunch of animals throughout the game, and they have the strangest voices. I don't even know how to describe it. None of the American voice actors attempts a dramatic accent (though many go for silly voices), and they all sound freakishly laid-back. It's like the casting calls were posted exclusively at community colleges near the beach.

That said, although the storyline is boilerplate fantasy stuff, I was surprised by how much I grew to care about the Majin. His dialogue can be annoying at times, but he is such a reliable partner that I actually started feeling anxious when we got separated. It was always a relief to turn around and see him lumbering toward me, his knuckles practically scraping the ground. At the game's emotional climax, I wouldn't quite say I was moved, but I did care, and I think that's an achievement worth celebrating.

The story did not do much for me but the gameplay is what sold me. I agree Majin is someone you end of caring about even if you want him to shut up. Majin knows how to fight and takes orders well which makes the game fun!

I played the demo a bit , but it was somehow weird to command the Maijin. I guess it takes a little practice .
Anyway i liked it also, maybe precisely because i didn't expect anything

I have the complete verison of this game, in my personal opinion, is not so good as I thought, but is good as a rookie game.