No question, 3D was the story of the show at PAX this year. The expo floor was jampacked with 3D displays for games of all types, and one of the longest non-Portal 2 lines was for demonstrations of the Nintendo 3DS. There is a sense of inevitability about 3D. No matter what reservations you may have about the technology -- the glasses, the eyestrain, the dimness -- they do not matter. 3D is coming.

One of the first things I saw on the show floor was an enormous display running a demo of Crysis 2. I wore the glasses for about 30 seconds and had to take them off. It's inaccurate to call the sensation I was feeling a headache. It was as though the signal from my eyes to my brain was doing barrel rolls. There was undeniably something impressive about looking into the game screen, but the physical discomfort was hard to take. Maybe prolonged exposure to the display would alleviate the symptoms. It's hard to imagine taking the time to break through the wall.

After I stood in line for about half an hour to play Resident Evil on the 3DS, I came away thinking that Nintendo has, once again, figured out something that its competitors still don't understand. The 3DS, at least in the couple of minutes I played it, does not hurt your eyes. The display doesn't flicker. The depth of field also isn't overwhelming -- no more of a graphical accoutrement than bloom lighting. And this is, I think, a good thing. It is easy to pick up a 3DS and play it, something that is not true about any other 3D technology that I've seen.

Oddly, my favorite use of the technology was during a viewing of the new Mortal Kombat -- a 2D game (which looks sweet even on a traditional display). Because the fighters moved along a line, they were in focus even when I was without glasses. Only the background was blurry. With glasses on, the fighters looked no different -- maybe a little heftier -- but the arenas were given a sense of depth, and when extra-powerful attacks broke the plane of the screen toward me, it felt earned instead of gimmicky.

Recently I've been playing Killzone 3. My review is coming this week, but I found myself wondering, the whole time, what might have been added to the experience if I'd been playing in 3D. Like its predecessor, it's a decent shooter that suffers from a lack of imagination. I can't imagine that playing in 3D would have changed what I didn't like about it. It still would have been full of long, bland shooting arenas. The mech sequences still would have been loud and disorienting, probably moreso. Yet, based on my other experiences with 3D, I think that the new perspective would have dominated my entire experience. I wouldn't have even thought about the fundamental game, but the technology. Unlike with the 3Ds, it would have been the main course and not a seasoning. And I'm not sure what good that would have been.

Is this the future? Sacrificing innovation in gameplay for an expensive technological upgrade? Or is that just the story of video games, same as it ever was?
Posted by Mitch Krpata at 9:00 AM 9 comments: 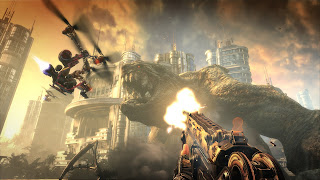 P.S. I thought about writing this like one of Patricia Marx's shopping columns in the New Yorker. A little bit of that made it in. I'm not sure why this is, because I do not like her columns.
Posted by Mitch Krpata at 9:00 AM 3 comments: