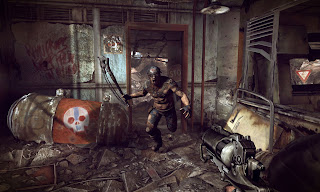 Above: Some manner of anger. Fury, maybe.

My review of Rage is up now at thephoenix.com.

The buzz I had been hearing was not good, and the game's first few hours seemed to confirm it. Where Rage attempts to modernize, it doesn't work. It is kind of creepy how much time you spend standing mutely while people give you orders, and how un-interactive the world is. But where Rage plays to id's strengths, it soars. I forgot what it was like to play a first-person shooter as pure as large portions of Rage are.

There is strategy involved, of the sort where you're deciding whether you want to do a little damage or a lot of damage. There are fun, unexpected weapons to use, like a mind-control slug that allows you to walk an enemy, zombie-like, into a crowd of his compatriots before blowing him up. Traditional weapons are all given a chance to shine, as smartly designed levels transition from close-quarters combat to wide-opeen battlefields.

Mostly, it's a game about shooting, and so it gives you the tools to do that. You can carry 8 weapons at a time in rage. Your sniper rifle scope stays steady, even when you're zoomed in. The action is smooth and lightning fast.The best summation of Rage that I've read came from the Dead End Thrills blog, which in a post that was otherwise all about id Tech 5, had this to say about the game itself:


It reminds us how far we’ve erred from the thrills of ‘run-and-gun’ into pedestrian ‘stop-and-pop’; how we’ve lost the rhythm of the firstperson shooter; and how look and feel are still more important than gimmicks and Gamerscore.

Of course, it's fair to say that not all of Rage consists of these shooting sections, and I'm with everyone who finds the vehicle portions and the world-building to be suspect. But I'm also the guy who will dismiss a game completely if I don't like the inventory menus.

I'm not contradicting myself. What I care about is what comprises the bulk of the experience. It doesn't matter to me how great the story is in an RPG if I am spending all my time grappling with the interface. And it doesn't matter to me that Rage's shooting portions are stitched together in a dead world with the occasional mandatory driving section, because those are easy and brief. If my buggy had constantly been blowing up, and if I had to spend long stretches doing more in the city hubs than picking up missions, my impressions would have been quite different.

As it is, if Rage had simply been a linear corridor shooter -- paced more like Metro 2033 than Borderlands -- it probably would be one of the best of the year.
Posted by Mitch Krpata at 9:00 AM 4 comments:

Hey there! Forgot to mention that I reviewed Driver: San Francisco for Joystick Division.

Don't have much more to add that isn't in the review. It seemed like a good game and I kept waiting for the moment that I would completely buy in, and it never came. I had some fun with it, for sure, but I'd play a couple rounds of multiplayer, or a few missions in the campaign, and start thinking about other games I could be playing, or things I had to do around the house. I never had any problem turning the game off.

Next it's on to Rage, it looks like, with some time for the Portal 2 DLC and a little more Resident Evil 4 HD. There's not enough time in the day.
Posted by Mitch Krpata at 9:00 AM 1 comment: