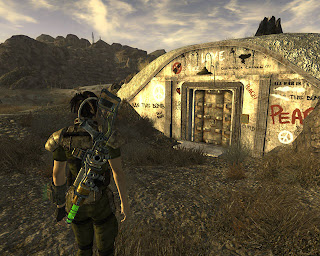 Above: The Courier contemplates his next move.

The Courier emerged from a shallow grave and became a contradictory, unpredictable force for good in the Wasteland. He always helped people when he could, even though sometimes he stole stuff when it was convenient for him. He also murdered about a half-dozen people for no reason, which he swears was by accident, such as when he meant to click through a closing line of dialogue without realizing that his hunting rifle was already swinging back up into view, and he shot old Alice McLafferty in the face. We tend to believe him, because this was the guy who scoured the desert for hours looking for a little girl's teddy bear. He never found it.

Not the brightest bulb, our Courier. Oh sure, he was eager, almost desperate for work, and he sought out and accepted new assignments with vigor. The follow-through, that's what he had trouble with. We lost track of how many times the Courier appeared unbidden at our door, begged for a job, and then vanished for weeks. At first, we worried. Eventually, we just assumed that some other damned shiny object had caught his attention out there in the wasteland. And we were usually correct.

He'd show up again, months later, babbling about some crazy-ass vault he'd found, or some loony ghouls he'd befriended, and then he'd stare at us blankly when we asked: But what about our chems? Did you bring our chems? He had not. We are still waiting for our stimpaks. Our people are dying here!

F-, would not order from this Courier again.

The Brotherhood of Steel had accepted the Courier into their private realm, and trusted him as they had never before trusted an outsider. They granted him weapons and armor, including their finest Power Armor, in exchange for nothing more than a few errands. When the Brotherhood looked at the Courier, they saw one of their own. Here was the man to bring science, technology, and learning into the new human age. The Courier repaid their trust by murdering them all when a talking computer told him to. Like, he didn't even think about it.

What a fucking psychopath.

Talk about your faux pas! Guess who showed up at Camp McCarran in his best Brotherhood duds -- again? That's right, it was the Courier, or as we like to call him, The Zero of the Tastes. (Come on, it works.)

For the third time in a month, the Courier appeared at the gates of McCarran in a run-down suit of T-51b Power Armor, with, get this, a T-45d helmet! He could have worn brown shoes with a tuxedo and not looked half as ridiculous. We certainly can't blame the NCR for opening fire immediately. We can blame them for their lousy aim, though. Fellas, what happened?

The Courier never found 50 of the Sunset Sarsparilla Star Caps. He tried. Really, he tried. He tried harder than any man should on a task so mindless. God, why did we even give him a quest like that? It was so stupid! What a goddamn waste of time! Arrgghhghgkhgdkjhdgsjhdsg

When he arrived at Jacobstown, the Courier could not escape one single, insistent thought: "Is that Lieutenant Worf's voice?"

Indeed, actor Michael Dorn did provide the voice of the wise Super Mutant Marcus, a fact that the Courier quickly confirmed on the Fallout wiki. Throughout his travels, the Courier had a habit of vanishing for minutes at a time during conversations, leaving the other party standing mutely, with a blank expression, as the Courier chased down another tidbit of casting information on the Internet. He was right more often than he was wrong, instantly identifying actors such as Matthew Perry, Michael Hogan, and Dave Foley.

The Courier did once go awry. After spending several hours with Boone, he could have sworn the sniper was voiced by Nolan North. I mean, who makes a video game these days and doesn't cast Nolan North? Boone sounds just like him. But no, according to the credits it was some guy named "Jason Marsden." Although he would never admit it, the Courier privately believes that this is a pseudonym for Nolan North. But he was always sure that the guy who did the voice of Marcus had also played Lieutenant Worf. It was obvious.

Because Worf... Worf never changes.
Posted by Mitch Krpata at 9:00 AM 2 comments:

The loneliness of the support gunner 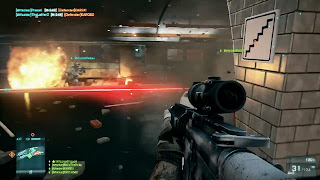 My sniper and I are crouched in the tall grass in a field overlooking an antenna site. We have an excellent vantage point from which to observe the comings and goings of troops in enemy-controlled territory. The sniper is an expert. Slowly, methodically, he picks off one Russian soldier after another. It is a beautiful sight. I feel blessed to be here, in this moment, in the sun-dappled splendor of these Central Asian hills. I am moved. It is not enough to witness this moment -- I must become a part of it.

Here's your ammo! I cry, hurling a crate of ammo next to my sniper.

He has stood up and is running away. The dull metal crate sits in the grass, unloved, never to know the warm touch of a restocking sniper.

I sprint after him. Wait! Wait! Got your ammo!

My energy is flagging and he is disappearing over a rise. I wonder: Had he even known I was there? Had I imagined our moment of shared transcendence?

And I wonder: Will no one take my ammo?

We are riding in an LAV through the streets of Paris. Through a small window, I see little but gray stone buildings passing by, sometimes only feet away. Judging by the thump-thump-thump of our machine gun above my head, we are eliminating hostiles with precision and efficiency. Our driver deftly navigates the narrow streets, as though he is driving a sports car rather than a truck loaded down with infantry and armor.

I am holding an ammo crate in my lap, drumming my fingers to the rhythm of the Rolling Stones' "Satisfaction."

We have captured an overpass that command has assured us is of utmost strategic importance. We have faced little resistance. We are moving on. There is a city square up ahead. Our leaders tell us that the fate of the entire battle may hinge on control of this square. Our gunner keeps firing. Our driver keeps rolling.

Soon, I am sure, we will stop, and someone will need ammo.

Someone must need ammo.

Before the war, this marketplace must have been the place to be in Tehran. I can picture families strolling through the bazaar, politely shrugging off entreaties from enthusiastic salesmen. I imagine young men buying fancy baubles for their dates. I can almost smell the roasting lamb from a nearby kebab stand. You could spend a whole day here and not see it all.

No longer. This is nothing more than a meat grinder into which dozens of young men are being thrown with a terrifying fervor. No sooner has a squadmate been been cut down than another arrives to take his place. You stop even trying to tell them apart after awhile.

I am lying prone in an alleyway, sweeping the optical sight of my M249 across the narrow opening to a nearby plaza. Behind me I hear a more lusty firefight, but I have chosen to defend our rear flank, which, to my mind, is pitifully exposed.

Now and then an enemy straggler stumbles into my line of fire. I let loose a volley of suppressing fire. They are not killed. Nor do they return.

I toss a bountiful ammo crate into the empty alley next to me. No one is there to reap its fruits.

Our company is huddled in the concourse of a Metro station, beset on four sides by encroaching enemy fighters. This is, at last, war at its most senseless. What possible strategic importance could this subway stop have for us? This isn't a battle -- it's mass murder. I can hardly hear myself screaming over the gunfire and the grenade blasts. But scream I do.

My comrades receive my ammo as manna. I have barely turned back to the fighting than the box is stripped and its contents depleted. It is no concern. I am prepared.

Again they throw themselves onto my supply crate, gorging like starving men who have discovered a freshly killed boar. Again they turn toward our enemies, weapons laden with deadly cargo, and relieve themselves of their payload without sense or reason. Again their triggers click dry, and again they return to me. Again am ready.

Shoot! Shoot, my brothers, shoot! Empty your weapons and feast upon my ammo! May the fighting never end!
Posted by Mitch Krpata at 9:00 AM 2 comments: