What happened to action movies? 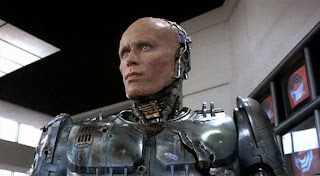 Above: Part man, part machine -- all the trigger for a 2,000-word rant about action movies

This week is RoboCop week over at Unwinnable, and with their prompting I have spent the last day devoting far more mental energy to thinking about RoboCop than I have to things like work, the GOP primary, or my personal hygiene. Unlike Garrett Martin, who just saw the film for the first time, I have seen RoboCop many times. I quote it with some frequency.

These come in handy more often than you'd think -- as does a triumphant vocal rendition of the film's score. Duhduhduh DUH DUH, duh DUH duhduh!)

Yet every time I watch it, I realize that I've made the same mistake. Since my last viewing, I've always come to think of RoboCop as that mega-gory action movie, the one where Peter Weller's hand gets blown off in close-up, a giant robot shoots an innocent man full of bullet holes the size of baseballs, and a bad guy disintegrates after getting doused in toxic sludge and hit by a car. Don't get me wrong: that stuff is all there, and it is spectacular.

But what I tend to forget is how funny, smart, and savage RoboCop is. As a satire of the Reagan 80s, it is absolutely merciless. 25 years on, its barbs still sting. Abandoned by the government, Detroit has gone bankrupt, and even the police force is now controlled by a shady corporation in search of profits. Anything the firm can do to reduce expenses will enhance shareholder value. The logic is as unassailable as it is reprehensible: the biggest expense on OCP's balance sheet is the labor -- the cops themselves. And so when some poor sap finally volunteers for the RoboCop program, it's not by choice. It's because a gang led by the dad from That 70s Show has blasted most of the flesh off his body. Talk about cutting expenses!

From here, the narrative follows two intertwined threads. RoboCop, along with his partner, uncovers the criminal conspiracy that goes right to the top of OCP, while RoboCop himself searches for his identity, haunted by flickering memories of his old life. He knows he wasn't always a machine, programmed to follow orders; he just can't make sense of the signals he's getting from his vestigial brain. The threads come together in a potent final shot, when the grateful old man says to RoboCop: "That's nice shooting. What's your name, son?"

And RoboCop turns toward the camera, in closeup, and answers, almost defiantly: "Murphy." 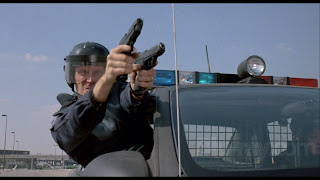 Above: So good, Paul Verhoeven even scooped John Woo on the two-guns thing

There you have it. A stunning meditation on laissez-faire capitalism run amok, man's search for identity, and robot policemen who can shoot the nuts off a rapist from 50 yards. Now, I understand that RoboCop was fairly well reviewed in its day, and rightly so, but in the passage of time it has come to be lumped in with a whole bunch of other films as just another 1980s action movie. This is wrong.

First, as I've already made clear, RoboCop is not just another 1980s action movie, as typified by Commando, probably the quintessential Arnold Schwarzenegger movie.

But to call RoboCop "one of the good ones" only advances a false narrative, which is that all, or most, action movies in the 1980s were mindless. It's not the case.

Consider this stunning fact: within a 16-month span, the following four movies were released theatrically:
Not only is each one of those movies not your standard brainless macho fare (not even Predator -- we'll get to it), they're four of the best action movies ever made. Why? Because they've all got something more happening under the surface.

Lethal Weapon today is remembered as the movie that gave us "I'm gettin' too old for this shit," but it's actually a portrait of profoundly damaged men, each of whom copes in his own way with the scars of a violent past. RoboCop, as noted, is a bitter anti-Reagan satire. Die Hard, probably the most important action movie ever made, gave us the blueprint for the next 20 years of action cinema, although nothing else would ever match it. 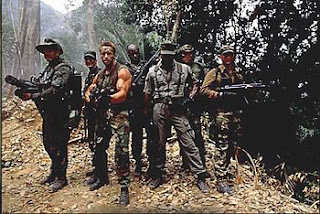 Above: Badass upon badass, like an MC Escher painting stabbing itself with a Bowie knife

As for Predator, it is clearly the best movie ever made about a badass alien being who travels to earth in order to hunt badass humans, but what's subversive about it is the idea that being a badass isn't always enough. I mean, the Predator is the biggest badass in the galaxy. He tears through some of the biggest badasses on earth, like Jesse Ventura and Carl Weathers, and still he's not enough of a badass to overcome Arnold Schwarzenegger. So what does he do?

He suicide bombs himself!

Are you kidding me? All movie long, we're led to believe this thing has a strict code of honor. It won't even attack unarmed people. Then, the second something's not going its way, it takes its ball and goes home. Like I said: being a badass isn't always enough. This was not the accepted narrative of the Reagan 80s. Even today, right-wingers will tell you that the hostages were released from the American embassy because the Iranians plotzed themselves the second the Gipper was sworn in.

(We learned that being a badass isn't enough in a more depressing way with Predator 2, in which being Danny Glover was apparently enough to take down a Predator. Really? In the first movie, the most badass dudes in the world couldn't stop a Predator, and only Arnold was barely, barely badass enough to do it, and now we're saying Danny Glover's on that level? Give me a break. Besides which, Predator 2 is horribly racist. Don't watch it.)

Here's my question: what the hell happened?

How did we go from four of the best action movies ever made in less than a year and a half, to entire calendar years where nothing good comes out? How did we go from hardcore, R-rated films where people get their brains blown out in slow-motion while Bruce Willis calls them all motherfuckers, to PG-13 movies where doughy guys are probably fighting but it's too up-close and choppily edited to tell? How did we go from action movies that snuck hidden meanings into the mayhem, to movies that clumsily comment on topical issues without taking a firm stance in case it'd hurt overseas box office?

Action movies just aren't as good these days. Not American action movies, anyway. They're still getting it done in Asia.


Above: Indonesia, gettin' it done

Part of it is genre distinction. You could ask me: what about Iron Man, or The Dark Knight? And I would say, yes, those are excellent examples of big-budget blockbusters that are fun and smarter than they need to be. But they're not action movies. They're superhero movies.

I realize it's a fine line. Why is RoboCop an action movie, but Iron Man isn't? They're both about guys who use advanced technology to give themselves incredible powers that they use for good, and not evil. They both have evil corporate antagonists who appropriate different advanced technology for evil, and not good.

RoboCop, in other words, is not an enviable or aspirational character. He's a tragic figure. So is John McClane, the shoeless cop trapped in a high-rise with a dozen highly-trained terrorists. So are the badasses of Predator, lost deep in the jungle with the one thing in the galaxy scarier than they are. So is Martin Riggs, a man suffering so badly from PTSD that his greatest asset in the field is a total disregard for his own life. That things may turn out all right in the end for some of these characters is beside the point. They are driven to action not by choice, but by necessity. 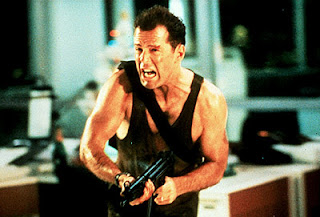 Above: No one would want to be in John McClane's (lack of) shoes

Try to think of a recent American action movie that fits these criteria. Taken has achieved "no way am I changing the channel" status whenever it's on TV. It's exciting as hell, and Liam Neeson is almost badass enough to make you think he could face down a Predator, but it's also one of those PG-13 movies where the craziest stuff is almost brushed aside. (Awesome exception: when he shoots the French guy's wife to show he means business.) What Taken lacks, especially, is that deeper level. Its message about human trafficking is a good one, but it's all right there on the surface, and not especially daring or sly.

The Bourne movies are good, and tap into the post-9/11 distrust of a government with too much data and too few scruples, but the endless shaky-cam and PG-13 violence don't have the grandeur we used to expect. Michael Mann's underrated Miami Vice is another good one, but it's too faithful a police procedural to rank with the all-time greats. (Plus, Colin Farrell's mustache is so ridiculous that you expect John Matrix to show up and impale him with a pipe.) People seem to like Crank, but holy hell is it silly -- like, Commando-level silly. Also, I feel like I'm the only person who noticed that Jason Statham's character rapes his girlfriend in public in that movie.

We could go on for awhile. 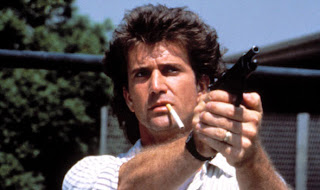 Above: Smoking? Talk about your bad role models!

The fact is, we're in a drought of great action movies. There could be any number of reasons. Studios might have realized that PG-13 movies make more money. The global marketplace might have made it more risky to put subtext in your blockbuster, either because it wouldn't translate or because it could translate too well and offend somebody. We might have lost our national appetite for shirtless men screaming while firing M60 machine guns into banks of computers. I don't know what it is. I just know it's a goddamn tragedy.

You might ask: Isn't it possible that I only think so highly of these movies because they came out when I was young and impressionable, and watching VHS copies of them out of sight of my disapproving parents was the most thrilling thing I could imagine?

Yes. Completely. I'm willing to say there's greater than a 50% chance that this is the case. And if it is, then anything else I've said here is irrelevant. But just in case, let's press on.

See, Hollywood in the 1980s knew something that today's filmmakers have forgotten. They knew that you could lure people to the theater with the promise of titillation, and sucker-punch them with a story of real substance. They knew that action was about pulling the camera back and letting the viewer see where the antagonists were in relation to one another, and what they were doing, and why. They knew that someone could be part man, part machine, and all cop.

If not, maybe John McTiernan can just do a Kickstarter or something.