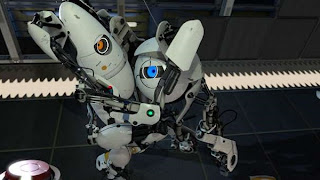 Above: http://www.youtube.com/watch?v=9oOHr--AMes
You can find my review of Portal 2, the least necessary Portal 2 review ever published, at thephoenix.com. High praise, naturally, which is why I say it's unnecessary. The critical consensus on this one is unusual, even in an industry where heretics are swiftly and severely punished. Don't let me be the one to dissuade you: Portal 2 is damn good.

Even so, I find myself in the strange position of liking the game a smidgen less than almost everyone else I read and talk to. Not a problem when writing for a more general audience, but on Twitter and in my own inner monologue, I focus more on the few things that separate us, rather than the numerous things that unite us. My complaints are all subjective, for what that's worth.

The biggest: no matter what kind of nutty things Valve included in the sequel -- and you know, if you've completed it, that they included some nutty goddamn stuff -- the novelty factor is still diminished, if not entirely gone. The leap from nothing to Portal 1 was much greater than the leap from Portal 1 to Portal 2, and how could it be otherwise? I felt the same way when I played Portal 2 as I did when I played Guitar Hero II and Left 4 Dead 2. It's probably the better game in every way that should matter, but its predecessor gave me a brand-new experience, and that's invaluable.

Second: The nerd bait was way overdone. Way, way overdone. Even while playing Portal 2, I thought a lot of the jokes were written with merchandising potential in mind, and nothing I've seen since then has changed my mind. The Weighted Companion Cube was a great joke in the first game, but I have a hard time believing anyone at Valve thought of selling a plush version until after gamers told them it was a winner. It's like they were throwing everything at the wall to see what stuck. (They were really pushing the "animal king" thing hard.)

Third, and possibly the dumbest: I believed in the first game. GLaDOS seemed rooted in some kind of truth -- not a literal truth, but an emotional truth. She was the perfect embodiment of automation run amok, whose behavior was dictated by implacable logic. All the jokes and the hyperbole grew from a very real place. This is not the case in the sequel, where the jokes are often just jokes. Further still, the more I listened to Cave Johnson's recordings, the less Aperture Science seemed like the inevitable endpoint of scientific research unmoored to ethics, and the more it seemed like the inevitable endpoint of a brainstorming session with a bunch of smartasses.

The bull sessions may be responsible for my fourth complaint: too much talking! Sometimes I found myself wishing the voiceover of the moment would just shut up so we could get on with things. Valve's writers are too sharp to miss the mark very often, though, and there are some real gems. Something like the "edgeless safety cube" makes a real point about the power of euphemism to obfuscate the truth. (The edgeless safety cube is, of course, a sphere.) That was the sort of thinking that informed every aspect of the first game. Less so this time around.

Last: Having played through both campaigns, I can't think of when I'd pick either of them up again. I could see no reason to play co-op again with the same partner. If I played it with somebody else, I could see myself trying to hurry them through it, and that wouldn't be fun for either of us. On the other hand, any DLC for this game would be a day-one purchase.

There! Glad I got that out of my system. This game is sweet.
Posted by Mitch Krpata at 9:00 AM 6 comments: 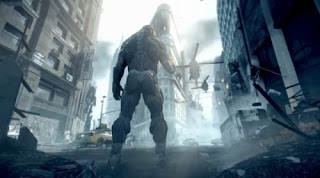 *Or something like that.
Posted by Mitch Krpata at 9:00 AM 2 comments: 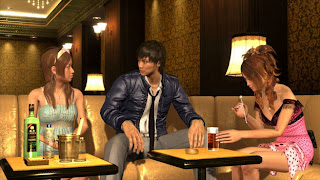 I appeared on the latest episode of the Brainy Gamer podcast, along with Brad Gallaway of GameCritics.com and Nels Anderson of Above 49, to talk about what we've been playing lately. You'll find some solid under-the-radar recommendations, one of which I was glad to be able to provide. Hint: It's Yakuza 4. I also took a little more time to slag on LittleBigPlanet 2, which Brad admitted that he hated too, much later in the podcast than he should have.

The super-sized podcast also contains two other GDC-based segments, one featuring cool dudes Patrick Klepek, Matthew Burns, and Chris Dahlen, and one with Sean Duncan of Miami University (himself a cool dude). Give it a listen!
Posted by Mitch Krpata at 9:00 AM 3 comments: