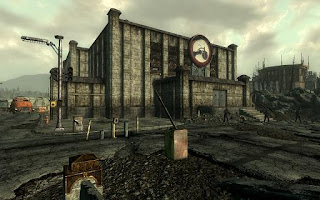 Above: The Red Racer Factory -- yep, there's a story in there.
It's fair, I think, to criticize psychic NPCs, repetitive interiors, and all the other problems that can pop up while playing Fallout 3. Certainly it would be nice if Fallout 4 could somehow do away with them. But it's still worth celebrating all that Fallout 3 does so well. The wasteland is a massive canvas upon which are painted scenes of depth and import, most of which aren't story-critical but instead serve to flesh out the mythology.

I talked about my trip to Vault 106 in an earlier post -- that was the Vault where all the residents had been driven insane by some kind of nerve gas. "Agatha's Song" sends you to Vault 92, whose overseers conducted mind-control experiments using white noise. And last night, I took a look around Vault 108, which was inhabited by dozens of clones named Gary. Regrettably, even Gary 1 felt the full force of my Super Sledge.

Vault 108, like 106, isn't integral to any quest line, and yet Fallout 3 would hardly be the same game without it. So much in this world is so interesting that I have yet to sit down and accomplish what I initially set out to do in a single session. I keep getting distracted. I also have yet to play it for less than 3 hours at a time. That's not just because there's so much to do, although that's part of the reason, but also because the extracurriculars are woven so skillfully into the fabric of the game world.

Take the Red Racer Factory. I never would have heard about it, except that in the course of searching a different building entirely (the Nuka-Cola Factory), I came across a dead body carrying a note. The note said that he was there to steal the Nuka-Cola formula, which he would then deliver it to his comrade at the Red Racer Factory. Logically, once I found the formula, that was my next stop. Once there, well, how could I resist going inside?

Inside the Red Racer Factory is, once again, a little self-contained storyline. Ghouls and Super Mutants patrol the interior, but they're controlled by brain implants that can be shut off by computer terminals. At the innermost point of the factory is a demented mad scientist wielding a missile launcher. There's no great reward for taking her out, but you do get a better understanding of what's happened to the world since the bombs fell. It would be possible to go the whole game without visiting this factory, just as I'm sure I'm missing many other similar places. But to do so -- to rush through the primary storyline -- would certainly be to miss what Fallout is really all about.

I once read an interview with Shigeru Miyamoto where he talked about creating The Legend of Zelda. He said he was inspired by the time he spent as a child searching the Japanese countryside for caves and other hidden wonders. Fallout taps into the same vein of curiosity and wanderlust. There have been a lot of games made where interesting things appeared on the horizon, but invisible walls blocked you from ever getting there. That doesn't happen in this game. If you see it, you can reach it, and you never know what might await you inside.
Posted by Mitch Krpata at 9:00 AM

For me what's also important about Fallout 3 is that the main quest line is also interesting. Although Oblivions side quests and DLC weren't anywhere near as interesting as those in Fallout 3, I spent over 100 hours skulking around dungeons, searching the landscape, and just exploring and experiencing the game world. I gave up on the main quest, and though I did complete the bulk of the early DLC, in the end I had gotten my money's worth. Bottom line, though, is the main quest seemed boring, and in Fallout 3, it's all interesting.

I also loved the tidbits within the non-essential vaults. Yet, you just made me realize that I never actually entered the Red Racer Factory. I showed up, killed the hockey crew outside, got assaulted by the Talon Company, got my +25 AP mask, and went along my way, never thinking to enter. If I didn't have the game out on loan to a friend, I would go check the factory out now.
(Spoiler free:) My favorite location that is off the main quest trail is the city of two families that acts like everything is fine and dandy, but they have a big secret that I totally did not see coming.

So many moments stick with me, but perhaps the one that I remember most fondly was when my Pip-Boy 3000 first tuned in "Radio Free America."

It's not so much that anything brilliant was said, just that it was the perfect cherry on the Sino-American war sundae the game had been constructing all along.

I'm working on a review of Fallout 3 (file it under "better late than never'), and your "big picture" reaction basically encapsulates my whole thesis. If I copy/paste from here, do you think anyone will notice? ;-)

I have all sorts of niggling issues with the game, and some of them drove me crazy at times. But, as you say, the whole enchilada is truly an achievement to admire. I'm glad I stuck with the game after leaving it for awhile. For some reason, I was more open to the experience the second time, and the game drew me in deeper. So many amazing moments, both little and big. It took me awhile to learn what do do with all that freedom.