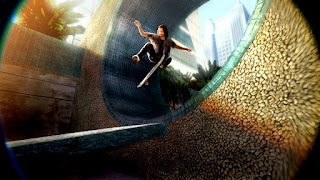 Above: Sweet Suzie!
Like a lot of people, I'm looking forward to Skate 2. The first game was a real surprise, one of the few games I've ever thought I underrated in my original review. As a result, expectations are high for the sequel. You can tell just by reading what the kids have to say about it over on Gamestop.com.

User "none." gets things started with the airtight logic we've come to expect from our friends on the Gamestop boards:

This game by far beats skate 1. The graphics are/will be amazing and the game play is so much smoother and realistic feeling. Saying the graphics suck from just playing a demo is stupid, its barely 2gb, Just like Cod waw, the graphics were bad on beta and then they turned out to be good. The getting off board mechanics could be a little better but we'll barely ever need to use it unless getting up stairs and what not. It's all about skating, not who can run through the maze fastest. This game will be a must have for 2009. I would recommend this to anyone. give the game a chance instead of judging it by a 2gb demo.

Got that? Don't judge it by the demo, like I did.

The I, Robot award for most excessive use of a titular word goes to "Turbo 2112":

I personal think the demo is great. Skate was a fantastic game and still is. All skate 2 is added additions to skate for example getting off your board. Skate 2 is a great game and way more realistic than the first one. I cant wait to skate the other places in Skate 2.

Thanks to all this repetition, the word has lost its meaning. It's all just a bunch of bullskate.

"Boomshakatak" is a bit less optimistic than I am:

What were they thinking? I played the demo and i have to say what a great way to massacre one of the best games ever made. This game is nothing like the first one, too tony hawkish, controls flat out bite, tricks feel awkward, graphics are terrible. This is the worst let down i have ever experienced.

Let's hope he never gets turned down for a date.

I honestly can't figure out which side of the fence "Sk8SoDontH8" is coming down on:

I am a skater and was getting tired of the same old Tony Hawk games of pushing a bunch of buttons to land something. Then i saw skate and was blown away! Then saw skate two and almost cried!

Cried because it looked so good, or so bad? I can't deal with this kind of ambiguity and subtlety. Fortunately, we've got "A Customer" to get us back to what Gamestop.com user-submitted previews are really all about: unreserved fawning.

Not to be outdone, "Grahamatic" says:

I have played skate. for the longest time and to be honest i haven't put a new game in my xbox 360 for over three months. Skate. is the best game ever made and don't even try to argue. The reason I am saying this will be the game of the year, if not best ever made, is because it is only perfecting an already perfect game. Skate. 2 will be the greatest thing ever to happen to the world since sliced bread! Can't wait, so pumped!

I'm speechless, as usual. And then "Deamon" proves, once again, that no joke I can make can possibly top the source material:

This game is gonna Own face all night long, Sweet Suzie! I can't wait to start my own label and make my own spots. That's gonna kick so much ya know what i'm saying dude. How can you not like Skate? C'mon u know u want a PRE-ORDER! WEWT!

But I'm not here to judge. I'm like an anthropologist, bringing you stories of far-off tribes whose cultures are quite different from yours and mine. Sweet Suzie!

That sweet suzie at the end made me laugh til I cried.

Some of these must be PR flacks right? It can't cost EA that much to have an intern go to a bunch of gaming site and leave fawning comments about Skate or Mirror's Edge or whatever games they're pushing. It wouldn't even take that long since paying any attention grammer or spelling would just makes the comments less realistic.

That last review leaves me dumbfounded.

I know this is hard to believe, but since I started doing this I've come to feel genuine affection for these people.

They are "perfecting an already perfect game". Wow...those guys at Black Box are truly skilled...

Like HM Stanley into darkest Africa, you go where sane men dare not, returning with strange artifacts and bizarre tales. You are a brave and stalwart soul sir, and I commend you.

I agree with Adam, some of that drivel has got to be PR stooges. It's easy enough, watch:

"Insult Sword-killing more like it! B/C this blogg owns skulls! Serisly. Mitch here is a rl talent 4realz! All you other bloggers are h8ters!"

Oh man, I should really give EA a call, they could use my 1337 skillz.

I honestly don't think they need to pay people to post this stuff. A couple TV spots and a few print ads, maybe a billboard or two, and the kids that have been trained since birth to take brand recognition as a substitute for quality get all worked up. You see a similar phenomenon around other products, like movies, bands, or political candidates.

Oooo, Skate! I loved Skate. Surely Skate 2 must be shit-tonnes more awesome than Skate 1. I mean, it has to be! I skate too, all the time and the skate and trick controls in the original were TIGHT. Like, so TIGHT man, it melted my face. Skate 2 is gonna be so awesome. I can't wate for Skate 2. ROCK!

It's funny, because I'm genuinely excited about this game. So excited that talking about it might actually cause the odd spelling error!

It's the single greatest sandbox game ever conceived. Easily.

Skate is so tight it's gonna burn! Like literally burst into flames of awesomeness all while angels descend from the heavens praising its superiority over all mankind has ever dared to achieve. As you play you'll cry tears of joy which will form a river, then a sea and little dolphins will swim around you doing their cute little tricks just before being eaten by sharks with freakin lasers attached to their heads. Then an alien spaceship will crash before your feet and a foreign looking dude will grab you by the neck yelling in your face how he travelled through time and comes from a land far, far away just to tell you of the even more awesome sequels which will lead all the way up to Skate8 and are so inconceivable perfect that just touching the gamediscs will have you instantly climax. Hard. And often. You better believe it.

Do you think that movies have forums like this? Like a bunch of kids getting hyped up about The Dark Knight? And if so, do you think the people from the New York Times movie review section go to those forums and read what those kids have to say? I think you should post more of these treasures from the forums because they are hilarious. But are we maybe taking them too seriously?

I think the IMDB forums are pretty similar, but (un?)fortunately you can't read those unless you're a registered member as well.