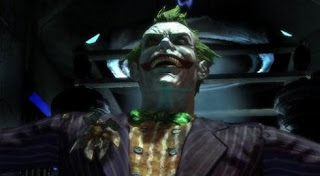 Above: Mitch Krpata after reading user-submitted previews of Batman: Arkham Asylum on Gamestop.com.
After a fairly dry summer for AAA titles, the fall season kicks off with the release of Batman: Arkham Asylum on August 25. As a lifelong Batfan, I'm looking forward to this one despite my better judgment. But you don't come here to find out what I think about upcoming games. You come here to find out what Gamestop.com users think about upcoming games. Although in the case of Arkham Asylum, "think" may not be the right word.

So far from all the previews and stuff this game looks really good and the storyline is really cool the story begin as batman bring the joker to arkham but than batman felt something was wrong because joker just surrender without a fight when really it was trap set by the joker and that's when the story begin this game is really great i can't for it to come out this i hope this is the batman game we've all been waiting for.

You may look at that and simply see a garbled mess of words, with run-on sentences, disagreeing verb tenses, and nary a punctuation mark to be seen. You neanderthal. I see a linguistic gumbo that's practically Faulknerian in its depiction of sexual repression and mental retardation in the deep south.

DLM won't take the fans' word for the quality of Arkham Asylum. He goes straight to the experts:

I can't wait for this game! Game Informer even featured it in one of their issues with really positive things to say about it. Not only game informer but gamespot.com and IGN.com gave this game some face time. Rarely does a superhero game get this much credit from video game press.

It's true: The only surefire way to know if a game is good is to see if it has ever been previewed in the rarefied pages of Game Informer. This is like saying the Royals are a great baseball team because they get coverage in the Kansas City Star.

(Actually, I am willing to bet that this game's Metacritic average will be at least 30 points higher than the Royals' winning percentage at the end of the year, which is somehow more an indictment of the Royals than of Metacritic. Why am I talking about baseball right now.)

It wouldn't be Gamestop.com user-submitted previews without a head-scratching factual inaccuracy. Take it away, pmilleroly27:

Well Batman is the greatest fictional character ever to who wouldn't want to try this game out. Not to mention you got Rocksteady who made Bioshock. And the writer or Batman the Animated Series making the story line oh and the voice actors from the show as well.

According to MobyGames, Rocksteady's sole shipped game to this point is Urban Chaos: Riot Response. Nothing wrong with padding the ol' resume, I suppose. No harm done. That's one of the many lessons I learned when I wrote for Kotaku.

doctor do games2 is looking ahead to the year-end lists:

i played the demo for this game and the graphics are great, the fighting style is superb, and the jokers voice and demented comedy is friggin awesome. throughout the challenge mode joker dissed batman, his own goons, and himself. i wont be suprised if this game is in the top ten in game informer.

Pfft, like a superhero game would get that kind of credit from the games press! We're talking about Game Informer here, not some hackish fanboy 'zine.

Batman Arkham Asylum is going to be better than COD: Modern Warfare 2 and Left For Dead 2 Combined. People think that New Super Mario Bros. Wii will get the game of the year, but they have no brains at all.

You'd have to be some kind of an idiot to think that New Super Mario Bros. will be the game of the year before you've even had a chance to play it. Obviously Batman is the best game of 2009. That's just science.

Looks like Splinter Cell in the Batman universe!!!!!! The game looks so incredible it makes me want to stop feeding my cats and punch them in their adorable faces. The very thought of their little mouths meowing and whining for cat food drives me to a level of angry that can only be subdued by this awesome game. In fact I'm glad I'm a human and not a cat so that I can play this game and swoop down and BAM! enemies in the face! If I was a cat I'd be a Maine Coon.

At least that one was intentionally funny. Right? Now if you'll excuse me, I'm feeling a powerful urge to lock all my doors and windows.

That last one literally has me in tears, absolutely hilarious