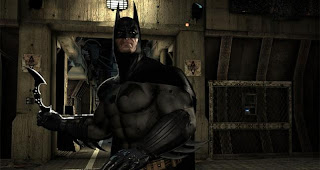 Above: More evidence that the fans love performance-enhancing drugs.
My review of Batman: Arkham Asylum is up at thephoenix.com.

Some leftover thoughts from the cutting room floor:

With the short space I have in the paper, I don't like to do token complaints when a game is great, just to prove my critical distance. Still, I do have a couple of token complaints, and I may as well get them out. The combat works quite well, with a streamlined interface and beautifully animated battles. The only problem is when enemies start to get stronger, and entire boss battles become about trapping you in a room with wave after wave of them. It's not too hard on the default setting -- it's just boring. Fortunately, this only happens two or three times.

Additionally, although the stealth aspect of the game works great, the reliance on gargoyles as your only means of escape starts to feel strange after awhile. Why do gunmen only populate rooms that have gargoyles? Why is Batman unable to hide on any other structure besides gargoyles? And why does every building in Arkham, while sharing few other common design elements, all prominently feature gargoyles? Yep, this is the level you have to stoop to in order to criticize this game.

One thought kept coming up while I was playing: "This is the game Metal Gear Solid 4 should have been." I don't say that just because of the heavy stealth element. In fact, the stealth gameplay was probably a little stronger in MGS4, although not much. There just wasn't very much of it. And whenever that game diverted from its core strength, it suffered, and sometimes badly.

Arkham Asylum, by contrast, varies its gameplay nicely, and it all feels of a piece. Stealth sequences and beat-em-ups come in equal measure, without anything silly happening like a Batmobile driving level. Sometimes Batman needs to do some light problem-solving to navigate the prison, and sometimes he needs to use his detective skills to track key NPCs.

The real reason I made the comparison, though, was one particular sequence that happens late in Arkham Asylum. At several points during the game, Batman ingests the Scarecrow's fear toxin, which leads into clever and frightening nightmare scenarios. The third of these is the kind of brilliant fourth-wall breaking that Kojima used to do so well, but only intermittently in MGS4. Granted, I'd been playing Arkham Asylum for several hours at that point and it was well past midnight, but I honestly questioned my sanity for a minute.

Oh, and Arkham is also shorter and has no filler. So there's that.
Posted by Mitch Krpata at 9:00 AM

Now, I've never played MGS4 so my question here might not be necessary or worth even contemplating, but isn't MGS4 longer than Arkham simply because of its long, long cut scenes? If that's true, gameplay-for-gameplay, Arkham Asylum would be longer, wouldn't it?

You don't precise in which level of difficulty you did play the game, but after playing the demo, and reading some review I decided to set it up on "hard" and so far don't regret it.
The experience really worth it. It kinds of tie up the gameplay mechanics. Providing more challenges along the way where it might have been almost "just an other bath of ennemies to defeat".
I would recomand to your reader to try this when playing.

Regarding the Length of life I am a bit surprised of your comment tho. I already spend a good 4 hours on the game and complete it at only "11%" according to the game.
Of course this pourcentage includes all the extras to be unlocked, but I hope that the main story will cover at least 50% of the overall content. Hopefully it should offered me 15h hours game.
And if this game keeps its standard that high for 15h, that will be a good achievment I am not going to complain: a good balance for me to play others game to but still feeling I get a game that gave me back for my money/time spend on it ( to get back to one of your old topic).

I also checked its metacritic score: 92. That made me realised that with a big new trend of multiplayer games, the highest Console score for "new IP" in the last 2 years have been hold by single player game: Bioshock and now Batman. Interesting for a world where publishers want to sign mostly Multiplayer title...

PS: sorry for the "frenglish", I know that for a writter it might be a torture to see how I mess with your language

You're right, I did play on the default difficulty, which wasn't very challenging at all. But that's the way I like it, generally. Is the combat harder, besides not giving you the visual cue to counterattack?

I think my completion percentage upon beating the game was 68%, after something like 9 hours of play, so obviously I missed some stuff. (That's deadline for you.) But overall it still isn't what I'd consider a long game -- which, again, is usually a positive in my book, especially when the pacing is so good.

Hi Mitch - totally agree with you on the games short length, definitely a plus. For some reason I'm yet to put my finger on the general structure of the game reminds me of Luigi's Mansion.. Maybe it's the short length, coupled with a semi open world and clear objectives.

Then maybe it was the unfulfilled disappointment I felt at the end of both games - though I think that was just my brain wanting more rather than dissatisfaction - I loved the game while it lasted.

Finially finished Batman (in hard tho).
It was a really good journey, challenging, and surprisly frustrating in the early hours.
I ended up spending few hours falling down in front of some "bosses" at the early stage but never find myself frustrated: one of those time where you are always progressing a little in between 2 game overs, which provide you with the faith that you are so close to make it, and that your next attempt should be THE one :)

You are right, there is no visual clue as the little "thingy" appearing on your opponent head during the fight. But you can still read who will be the next opposant by the posture your opponents take ( which just need a bit more of focus on your screen); and the message "y to counter" is still being displayed tho.

I assume that the game looks easier to me as i go further as my skills were shapped; but honestly it was not over challenging, playing in hard just psuh the player to read and use the environment sharply.

I have tried this one, Batman looks very strong in this.