My superpower is running and hiding 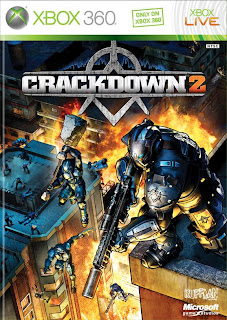 Above: Because a Google image search for "Crackdown 2" yielded nothing.
One more note on Crackdown 2.

We talk a lot -- or we used to talk a lot -- about ludonarrative dissonance. In laymen's terms, it means a conflict between a game's story and the mechanics the game uses to tell that story. A recent example is Uncharted 2: in cutscenes, Nathan Drake is a charming everyman, sheepish and gentle, and in gameplay he's an unstoppable killing machine.

It might be hard to see how a game such as Crackdown 2 can have ludonarrative dissonance when there's almost no narrative to speak of, but it's there. The point of this game is that you are a badass. Right? That's the whole of it. You are a one-man wrecking crew who becomes a one-man army. Forget a plot about freaks and gangs -- that's the story.

But playing as a badass is often not the best way to progress. One of the objectives in the game is to capture tactical locations held by gangs. It's pretty simple: you find an area, trigger the scenario, and then kill a certain number of bad guys. Eventually the game will tell you that you have been successful.

In my time with the game, I found that there were lots of ways to fail at this. Charging in and trying to punch the gang members, for example. Trying to throw things at them rarely worked. Tossing explosives was okay if I was in range. But generally speaking, no matter how powerful I thought I was, if I went right into the hornet's nest, I was toast. (Especially since, thanks to the wonky targeting lock-on, it was all too easy to accidentally shoot a nearby explosive barrel instead of the bad guy behind it.)

Eventually I discovered that the best way to lock down a tactical location was to play it cowardly. I disappeared around corners, popping out just long enough to plug one enemy before seeking cover again. This was time consuming, and hardly ever fun, but it was the most effective way I found to accomplish my objective. Once I found it, I had little incentive to keep experimenting.

There's nothing inherently wrong with a game about a character who uses the environment to his defensive advantage. Here it doesn't make sense. One of the things I liked so much about Prototype was the extent to which it encouraged you do to absolutely anything you could think of with all the crazy powers it bestowed upon you. In Crackdown 2, you can safely ignore most of them. What good is that?
Posted by Mitch Krpata at 9:00 AM

To be fair it wouldn't be too much of a game if you could just run blindly about in every mission with a sense of invulnerability. And to be fair to Crackdown 2, you usually can :).

My interpretation is that you're a badass up to the level of dealing with 20 guys at once. Then you're in trouble. Which I think is fair enough.

That's how it was for me in the first one. I had fun collecting the agility orbs, but I couldn't take a gang hideout to save my life. I'd run in, someone would throw a grenade/rocket at me, and then 30 guys would shoot me as I spun helplessly in the air. It never seemed to get any better as I progressed, so I gave up on the missions.

I found armed with a homing rocket launcher, a big vertical jump and all four health bars I could storm almost anything as long as I kept moving and kept an eye on incoming explosives. It wasn't until the very end where everybody had rockets that I had to hide.

Oddly enough, I had the exact problem you are describing with Prototype. I couldn't stand still for a half second without being turned into a human ping pong ball by the end of the game. For several missions all I could do was run up a building far away and dive bomb straight onto my target, which was a really difficult move to aim.

I really loved how that game handled movement though, someone should mix Crackdown with Prototype... and maybe a bit of Just Cause 2, I haven't played it yet so I dunno.