Dance Central; or, what is Kinect for? 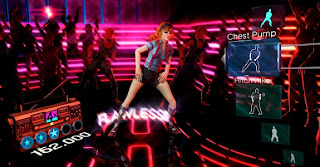 Above: Centralized dancing.
My review of Dance Central is up at thephoenix.com. I spent a good bit of it on the recent developments surrounding Harmonix, maybe a little too much. But, really, Dance Central is simple to explain and works as advertised, so what more needs to be said? Without having played any other Kinect titles except for Kinect Adventures, I feel comfortable saying this is the best reason to get a Kinect.

I never tried out the hardware when it was in development. My first experience with Kinect was when I bought one. After checking Best Buy for a couple of days without success, I stopped at a Toys R Us on a whim and they had several in stock.

(I haven't been to a Toys R Us in years. It's a weird, vaguely unsettling store. I remember it being like an amusement park, but it's actually just harsh lighting and metal shelves piled with crap. Plus I got bowled over by not one, but two determined moms doing some early Christmas shopping, and waited in line for several minutes before I could actually buy the damn thing from a 16-year-old sales clerk who seemed in over his head. Toys R Us sucks. Don't ever go there.)

Right, so, Kinect. It was a snap to set up: just put it in place, plug in the power supply, and attach the USB connection to the back of the Xbox. Start to finish, it took about a minute. As a former 32X owner, I appreciated this more than I should have.*

Part of the allure of Kinect is that you can control what's onscreen both with gestures and with voice, and I think it's going to take some time for developers to figure out which function works better for which applications. The Minority Report-style grabbing and pulling of menu options works quite well when you're browsing the Kinect hub. To actually select something requires you to hold your hand still in mid-air for a good second or so. It's hard to see how that's an improvement over a split-second button press.

You can also use voice command here, and it seems dicey. If other people in the room are talking, the Kinect doesn't pick up your voice. Sometimes it doesn't pick up your voice even if no one's talking. Sometimes it misinterprets what you said. And it's a slow process. You say "Xbox!" and then wait for it to acknowledge that it's now in voice command mode, at which time you can give the real command. Again, this is not actually an improvement over using a joypad.

(One place I could see voice command being a real plus: entering download codes. I was thinking about this during the ten minutes I spent trying to enter my online pass for Need for Speed: Hot Pursuit. How great would it have been to be able to just read the code aloud? Apparently that's not a feature yet, or if it is, I didn't know how to do it.)

Awhile back, I wrote a defense of the standard gamepad, in which I argued that, complicated though today's controller is, it has also evolved to do lots of things really well. Kinect does not seem to do most of the traditional controller things well. What the controller does best is translate minimal player input into maximal onscreen action. Moving the analog stick a few degrees is the difference between your character tiptoeing and sprinting. Kinect, it seems, requires big movements on your part to do something as simple as pausing your game (hold your left hand out at a specific angle for several seconds).

Kinect obviously has loads of potential. About half the time, it works so well that it feels like there's an alien intelligence in your living room. And about half the time it takes a dump. The challenge is going to be for developers to figure out how to use it. It simply will not work if they try to shoehorn motion controls onto traditional games. This is a lesson that took a year or two for studios to learn with the Wii and DS, and I expect that at this time next year we'll be looking at some games that make good use of the hardware. For now, it seems like Dance Central is it.

*I've mostly suppressed the memory at this point, but as I recall, the process for setting up the 32X involved putting metal clamps inside the Genesis's cartridge slot to hold the doors open, only the clamps were thin and tended to fall inside the slot, at which point the doors closed and they were impossible to get out. The 32X also had numerous passthrough cables, its own power supply, and I think you had to make a burnt offering each time you turned it on.
Posted by Mitch Krpata at 9:00 AM

Did you notice that you reviewed the technology rather than the game? For example, you don't even mention what any of the songs were.

I think this neatly illustrates the appeal of Kinect to gamers who already own Xbox 360s. It is a technological curiosity. The intended target market don't care that much about accuracy. You mentioned lack of simultaneous multiplayer and this is something that they probably *do* care about. A lot. I didn't know about this until now and I'm amazed it has been left out! This may be part of the reason that Just Dance 2 and the original Just Dance are both still outselling Dace Central in the weekly UK charts, but I accept that maybe Dance Central needs time to build momentum. However, lacking simultaneous multiplayer and the considering the fact that realistically the people who would really want this game "properly" would have to buy a new console for it, I don't see it gaining mainstream traction. It is getting getting praised by game journalists who are experienced gamers who review games on their own, which is a completely irrelevant context for the target market.

That's funny, I didn't realize I didn't mention any specific songs. I guess that's because A) none of them are songs I really loved, and B) it did seem more important to talk about whether the mechanics worked or not. That said, they did a pretty good job with it! Not my preferred genre of music at all, but I can jam to classics like "Poison" and "Push It." Harmonix has always been good at mixing the popular and the obscure.

I think I agree with your point about Kinect in general, but it is apparently selling like gangbusters, and definitely has a buzz about it that Move has lacked. As with the technology itself, I'm in wait-and-see mode about how it'll ultimately shake out.

It is selling copies but first month sales do not tell us if it has surpassed the standard hardcore sales pattern (i.e. an initial sales spike followed by dropping out of the charts and being forgotten about). I only consider this a possibility because of the nature of the Xbox 360 install base and the fact that it is actually getting hype in the gaming press (Just Dance didn't get any). We will only know if it met its goal if it is still consistently selling after a few months to a year.

Heh, and Dance Central ain't worth the $225 the whole package costs up here. I'm curious (and with drivers, hacking Kinect is intriguing) but I ain't $225 curious.

Which really makes me hope someone else can put out a good game for it. Everything else coming down the pipe looks like total garbage. After Christmas, everyone that wanted one already will probably have one. That just leaves people like me and if they can't shake the shovelware image quickly enough, I'll probably never be bothered.

One could say the same about the Wii, but at least Nintendo's first party offerings are rock solid. There's no evidence that MS (or aynone that isn't Harmonix really) knows how to make a compelling Kinect game.

I tried Dance Central and immediately gave up a few minutes later.

I agree the price is way to high at the moment to get into Kinect just to play one good game. Kinect needs time before you see some more stand out games. It took the Wii four years to finally have a solid line up of games and it is probably going to take Kinect about the same amount of time.

I had to run into a Toy's R Us myself to get my Wii when it first came out. I had got the second to last Wii at that store. Sadly though only a few moments later two parents threw punches at each other for the last one.

Just one comment. When you are giving a voice command to Kinect, you don't need to pause after you say "Xbox". You can say the whole command, and it will recognize it. For example, you can say "Xbox Next" without any pause. It will recognize and execute the command. The difference is that, in this way, it will not wait for further commands, it will just execute the command and never bring up the kinect voice menu at the bottom of the screen. So, if you want to give to commands in a row, like "Next" and then "ESPN", you'd have to say "Xbox" after each, or say "Xbox" wait for the voice command menu, and then say "Next, ESPN". So, it can either be "Xbox Next", "Xbox ESPN" ... or "Xbox --- Next ESPN".