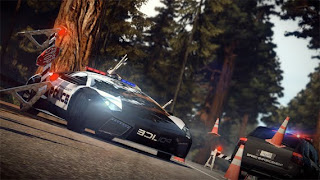 Above: It's the man, bringing you down.
Autolog recommends that you read my review of Need for Speed: Hot Pursuit at thephoenix.com. If you follow me on Twitter (why don't you follow me on Twitter?), then you know that I love this game with a passion bordering on obsession. I found myself thinking about it as I went to sleep at night, and when I got up in the morning. When I load the title screen, my heart starts beating a little faster. This is shameful, but it's the truth.

In the limited space I have for reviews, I prefer to focus on one or two major points rather than trying to cover everything. In this case, it seemed most important to talk about how flippin' awesome the hot pursuits are, so that's the majority of the review. I didn't even mention the social features, despite how prominently they feature in the game's marketing, and even though I'm about to discuss them now, the bottom line is that the social features are a nice extra and not a game-changer.

For Autolog is, at heart, just a leaderboard. In that sense it's no different from the high score list on a Pac-Man machine 30 years ago. If no one else has played an event, you hop right to the top. If they have, your incentive is to beat them. Occasionally, you return to the game to find that you have been displaced. Your friends' scores update automatically, which, again, is not new or unique to Hot Pursuit.

Where the Autolog departs from tradition is in the ease of use. You might finish a race and return to the menu to be interrupted by a breaking news update that someone has just beaten your score. With one button press, you can immediately load that event and set to work getting your revenge. More than once, this feature resulted in an asynchronous multiplayer game between me and some of my friends who were online. We could have raced each other head to head; instead, we were trading lap times in what felt like a 21st-century update of playing chess by mail.

That's intended as a compliment.

I'm a huge fan of pretty much any asynchronous play. It just makes sense for me because it allows for social gaming and unique experiences without having to set your schedule around it or drop everything once someone else is online.

Here's something I discovered last night that's kind of inexcusable: the online racing mode has no way to set up a party sort of thing with friends. In other words, the only way I can play online with one other friend is to hope that I'm in a race that's not full (not likely) and invite him to it. It's incredibly cumbersome and frustrating.

One note about the autolog. Today they launched the web interface, as well as an iphone app, both of which let you view your challenges and post notes on the wall, etc. I think that could be the big difference from basic leaderboards we were looking for.

In my experience, revolution typical comes in gradual steps, and there are a bunch of gradual steps in this games in terms of basic social play.

That's disappointing to hear about parties. I wouldn't have thought so. And I've been trying to convince a bunch of irl friends to get the game. Darn it.

Also, Rich, sorry about obliterating so many of your scores. It is not done with malice.

I will have my REVENGE... IF YOU HAPPEN TO BE IN A GAME THAT IS FULL AND I HAPPEN TO NOTICE THAT YOU ARE IN A GAME AND IF THE TIDES ARE RIGHT AND THE STARS ALIGN.

I agree absolutely with your comments on the Autolog's ease of use. What astounds me more though is the simply phenomenal sense of speed. To offer a somewhat juvenile comparison, it's like the scene at the end of the first Toy Story movie where Woody and Buzz strap a rocket to the RC car. As it picks up speed, Woody's face starts peeling back to show his chattering teeth and wobbling eyeballs. That's how I feel when I'm playing. It's brilliant.

The last racing game i picked up that I loved to death was Blur but this seems like another racing game that i can wrap my hands around. For me I like games that are easy to pickup and play and this seems up my alley.