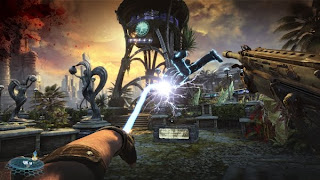 Above: Kids, tell your parents: "Buy me Bulletstorm, or go to hell!"


Next I downloaded the Bulletstorm demo. Count me among those who are pre-emptively embarrassed about this game. I’m already plenty embarrassed at the way its marketing team has been leading the games press around on a leash for the past several months. All this isn’t to say that I don’t enjoy a prurient good time as much as the next guy.

What I don’t understand about the Bulletstorm hype is the notion that killing people stylishly is a new concept. Devil May Cry and Ninja Gaiden have built empires on it. Bayonetta was one of last year’s best games, and that was the whole idea. Bulletstorm shares even more in common with MadWorld and The Club, both games from the past couple of years that I had mixed feelings about, but which employed basically the same formula: it’s not enough to kill people, you have to flaunt it.

The problem that both of those games had was that they got repetitive fast. MadWorld had, in the end, only a few different types of kills. Most were impalations. The Club seemed to want you to do a forward roll every time you killed anyone. In either case, the stylistic requirement seemed at odds with survival. Usually, as a player you refine your technique to find the most efficient way past your obstacles. These games, Bulletstorm included, ask you do to the opposite. They want you to find more and more elaborate methods to dispatch your enemies, while still finishing the level as quickly as possible. It’s a balancing act. If done well, you could see how it might soar.

I’m not sure if Bulletstorm soars. It looks great, and it controls well, and at this point I’m willing to roll with the humor. But after a couple of playthroughs I’m already repeating myself. You have a few different abilities in this game. Besides your guns (three available in the demo, each with an alt-fire mode), you have a kick move, and a leash, which I imagine is supposed to be the money shot. With the leash, you can grab enemies and pull them toward you, or hold the button down to launch them into the air.

There are plenty of environmental options, too, which all seem telegraphed. Some are clearly setpieces, such as when you throw a switch that drops a huge rail car down the tracks, crushing several foes.* Others are smaller but similarly designer-directed. One of the first things you see in the demo is a highlighted piece of the ceiling with a prompt to use your leash. You do, and it dumps a bunch of debris on a guy. That’s cool and all, but I didn’t feel like a badass as much as I felt like a rat that was pressing a button to receive a food pellet.

I could believe that the Bulletstorm demo is playing its cards close to its chest. Crazy weapons and varied environments could help it to pull off the combination of zaniness and mayhem that it’s going for, and I’m always a sucker for the kinds of massive boss battles that play in the video at the demo’s beginning. But I’m worried. Getting extra points for shooting a guy in the ass is fun the first time. The tenth time? Not so much. I think I’ve already reached my quota.

*Note, I have no idea if it actually was a rail car, and it doesn't matter, because it was really just some huge thing for crushin’.

Geez, have you played anything you liked in the last three weeks? If so, I'd like to hear about it. These last handful of articles just come off as depressing bitch-fests. I can read the comments section of any gaming blog for that.

Besides the Dead Space 2 demo and Need for Speed Hot Pursuit? No, I guess I haven't.

The comments section of this gaming blog is -- apparently -- also a bitch-fest.

That's irony, right? Like rain on your wedding day?

I tried the demo as well. Found it repetitive. I might buy it when the price drops...

I can easily see this being a bit of a fail. As they say though, the proof is in the pudding.

I actually loved the demo and found it re-freshing compared the majority for FPS which is mostly your Call of Duty rip offs. Though what I think will be good to find out when the game comes out is how the co-op multiplayer will handle. I am optimistic for this game.

When did the blog comments become a "depressing bitch-fest." For as long as I have been here things has seemed pretty positive overall and no one seems to be bitching at one another. If I wanted to read a "bitch-fest" i'll just read all the comments left for Michael Pachter.