PC gaming, I am in you 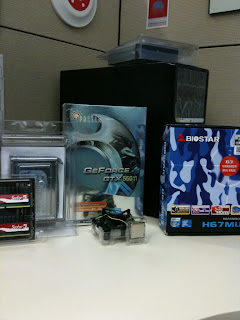 Above: The raw materials.

A couple of weeks ago, I wrote in my Joystick Division column about how difficult it is to return to PC gaming. Once you've been out of the loop for long enough, nothing about computers makes sense anymore. It's not like with a game console, where you can be reasonably certain that, once the PlayStation 3 has been out for long enough, you will be able to get a PlayStation 4, and that games marked "PlayStation 4" will work on it. You don't need to know anything about what's under the hood.

This is not the case with PC gaming. The two major video card manufacturers release a new generation of hardware each year, each with several options ranging from low-end to high-end. I don't mean to re-hash the column. I just want to point out that, while you have your choice of only three major game consoles in the year 2011, if you want to get a PC you must choose between 21 major video cards, which is to say nothing of processors, RAM, storage, and, of course, new hardware that will render yours obsolete the day after you buy it.

At any rate, it turns out that getting a new gaming PC is not so difficult or expensive, provided that you have a friend who is willing to do all the research, send you product links from Tiger Direct, and then assemble the machine for you. Sadly, my computer guru does not have an internet presence for me to link to, but he does share a fake name with a legendary singer-songwriter, and if you are in the market for a custom-built rig, you should try to track him down and hire him, A-Team style. He does excellent work.

So I'm back in the saddle. I've had the new system for a week now, long enough to put a decent amount of time into some games. I've come away with two major conclusions. 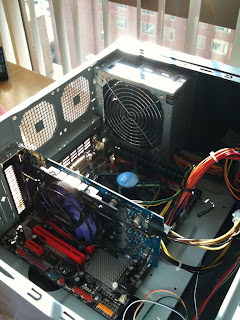 Above: The build in process.

The controls are better. I can't believe I forgot this essential truth. It took me about five minutes of playing with a keyboard and mouse to feel like I was bending the virtual environments to my will. Years later, I still find it awkward to play an FPS with a gamepad. On the computer, I forget I'm holding anything in my hands at all.

You can save anywhere. You can save anywhere! It's so important that I needed to say it twice. As a coddled console gamer, I've gotten used to having checkpoints every few steps, but even then, you don't always get returned exactly where you want to be. On the PC, I can save my state any time I want. And I do it. A lot.

Everything looks a lot better. I thought I'd been spoiled by playing Xbox and PS3 games in HD for the past few years, but running Deus Ex: Human Revolution in 1600x1200 resolution, with a smooth frame rate, puts them to shame. The company logos that appear when I boot up the game look better than any console game I've seen in the past five years. This thing is really going to pop when I get a widescreen monitor with an HDMI port. 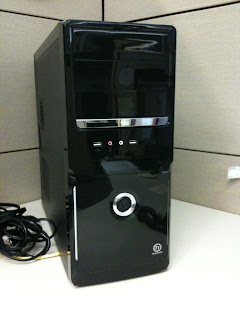 Above: The finished product.

Like a lot of people, I've gone for cheap laughs by mocking the PlayStation 3's endless system updates. But what is unusual for a console is standard practice for a PC, and I have to think that the only reason people don't complain as vociferously about computers is because of Stockholm Syndrome. Everything needs to be constantly updated. Your virus definitions. Your Flash player. Your operating system. All of it. And you usually need to reboot for the updates to take effect. And you'd better do it, or else your computer is going to fall prey to some hacker who enlists it to DDoS Sony's servers, thereby making it even harder to update your PS3. You just can't win.

DRM on the PC is out of control. Even these days, when you load a console game, presuming that it is a legitimate copy, it will work. But when I tried to install my retail copy of Deus Ex, which was sent to me by the publisher for review, Steam told me that I could not play it, because it hadn't been released yet. They didn't say it out loud, but I thought there was an accusatory subtext to the message. I don't think I should get special treatment because I review games*, but it seems like a waste of effort to make sure that nobody with a retail copy of your game can play it a couple hours early. Who cares?

In the first night of playing my first PC title in years, the game crashed twice. I can't remember the last console game I played that crashed (at least, the last console game not made by BioWare). I dealt with astronomical load times. I ran a stopwatch when reloading after one death. It took 36 seconds. Granted, these issues were addressed in a patch a couple of days after Deus Ex launched, which is a small point in favor, but it's not a good thing that publishers use patches as a way to ship games that aren't finished.

3) There's no third point, but I need a way to indicate visually that section 2 is finished.

I'm happy to be back in the land of the living. To some degree, the decisions are out of my hands, but I hope to review more games on this platform in the future, even if it means installing EA's sketchy digital distribution software to do it. Some of the big games this fall, Battlefield 3 and Rage chief among them, seem like they'd only be at home on the PC.

I'm also looking forward to catching up on some things I missed. I have a copy of Metro 2033 coming, which only cost ten bucks. The Amnesia demo was scary enough that I'm not sure I want to play the whole thing, but I could be persuaded by a Steam sale. I've even given some thought to downloading Crysis, just to say I ran it at max settings, which I am about 75% sure I could do.

Hell, with a computer this beastly, I probably have a good six months before I need to think about upgrading. I'll never die!

*I should get special treatment because I review games.

I highly recommend adding SpaceChem to your PC gaming list. It's kind of incredible.

I'll keep it in mind. Looks confusing. Is it hard to learn?

The fundamentals are straightforward, but it does ramp up in difficulty fairly quickly. This trailer does a good job of covering the basic concept.

I grew up a PC gamer and now funny enough a Mac gamer via Steam. I don't miss the PC side to much because that way I don't buy everything that goes on sale on steam and never play it again. I am very content with TF2, and Killing Floor. Yes, I did buy a two button mouse that was compatible for mac just so i could play FPS shooters the right way!

I am focusing more on console gaming because i am personally trying to be more social as a person. More playing games in the moment with friends who come over rather than online. I was addicted once to city of heroes/villains, and never really had one true friend during that time.

I could also not keep up with the high cost of buying video cards, and it was either that or give up beer!

Just played through Crysis on a mid range machine and it was amazing. Highly recommend it.

I'm a console gamer for the social reasons that Gaming in Public said, but for some of the single player only games the mods available make PC gaming look much more exciting. The Fallout mod scene, I've heard, is fantastic. Everything from allowing you to continue playing in the world after finishing the main story line, to adding weapons and vaults and quests and weather and textures and on and on.

The problem with gaming on everything at once is it gets expensive keeping up with consoles and PC upgrades both. More importantly, for social reasons (one of the best reason to play games is with your friends), once you've gotten a good group together on one platform or the other, it might be difficult to start over on a new one.

Don't forget to check out Minecraft.

I am a little afraid of Minecraft, but you're right, I should give it a try.

These days he goes by Yusuf Islam.

The controls are better. I can't believe I forgot this essential truth.

The difference is absurd, ain't it? For games that involve controlling an avatar from 3rd person (2D or 3D), gamepad is probably a bit stronger. For everything else, give that mouse and keyboard.

No idea how far in you're willing to dive, but if you want something detail, simulationist and god damn fantastic, Dawn of Discovery (aka Anno 1404 in Europe) can't be beat. Like Caeser, it's a real-time empire building things. Sorta like Age of Empires I guess, except without much fighting and way more resources/progression/knobs. It's so, so good.

I just had my GeForce 9500 blow up on me, so my pc gaming habits were put on hold for a little while.

For people looking to get into the PC gaming world, you don't necessarily need to be able to construct your own computer or have a computer guy to get a computer that can run the latest games. You can get a custom gaming PC from a system builder.

You said something important that most of the console gamers think that it is a lie. They think that you need to invest $3000 for a rig. They don't know that there are lot of options that they can fit your need and your gaming rig does many things at the same time that console can do.

Welcome back to REAL gaming! None of that phony gaming here, no.

On the price issue: you can get a good gaming PC for $1000 (what I'm guessIng is what you spent looking at the components), that's not ultra-expensive but it's still triple that of an Xbox. The games themselves are little cheaper though and of course that PC can be used for a lot more than gaming. But still I think it's true that PC gaming IS more expensive in the end.

It seems strange that you would be experiencing longer loading times though, It should be, and is from my experience the complete opposite. Of course there will always be some games that are poorly ported, or just badly optomized, maybe it was such a game you played?