Sometimes, things just start to look inevitable -- like the next-gen DVD format war. The latest news is that Netflix is phasing out HD-DVD, opting to carry Blu-ray exclusively. This article also includes the tidbit that Best Buy stores will begin to "recommend that customers choose Blu-ray," which is less impressive but still noteworthy. Certainly if they're hiding the $200 Toshiba HD-DVD players behind a massive Blu-ray display featuring the likes of Ratatouille, it's possible some consumers won't even realize they have a choice.

Then came this weak rejoinder from the HD-DVD camp:

We have long held the belief that HD DVD is the best format for consumers based on quality and value, and with more than 1 million HD DVD players on the market, it's unfortunate to see Netflix make the decision to only stock Blu-ray titles going forward. While the Best Buy announcement says they will recommend Blu-ray, at least they will continue to carry HD DVD and offer consumers a choice at retail.

Yep -- that's the whole thing. No blustery statement about future prospects, no mention of the lower cost of HD-DVD players, nothing about Paramount still hanging on as supporting HD-DVD exclusively. (Things look a little bleak on the Universal front, too.) I can't believe how sad and dejected the language is. "At least they'll continue to carry HD-DVD. Aw, shucks." You can practically see the spokesperson shoving his hands in his pockets and kicking a pebble.

It's getting hard to ignore the data as it accumulates in Blu-ray's favor. But the death blow won't come for a few months, and when it does, it's coming in the form of this movie: 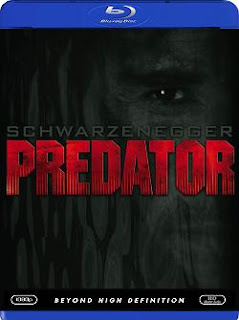 Blu-ray ain't got time to bleed.

Note: Apparently it's officially formatted as "Blu-ray," so that's what I'll start doing unless somebody has a counterargument.

Labels: Blu Ray, Predator Is the Greatest Film Ever Made

Blu-ray, PLAYSTATION 3, Xbox 360, WipEout PULSE etc. That's all fine. But to hell with the next developer that comes up with a name like S.T.A.L.K.E.R. or F.E.A.R. Didn't they realise how annoying it is to report on those titles?

Not to mention when they add the unnecessary subtitle, and you feel obligated to spend five minutes typing something like "F.E.A.R.: First Encounter Assault Recon."