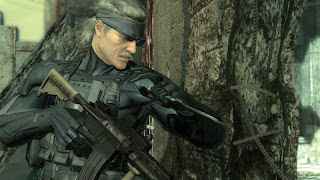 Only about a month late, my Metal Gear Solid 4 review is up now at thephoenix.com.

MGS4 is currently sitting pretty with a Metacritic score of 95. It's a little too much of a coincidence for me that a "one of a kind masterpiece" would be released only about five weeks after the last game the enthusiast press was falling over itself to anoint the best game ever. To read the blurbs about MGS4 on that Metacritic page is like witnessing one of those revivalist worship services where people speak in tongues and collapse to the floor in the throes of religious ecstasy. It's scary and weird, and when I played the game I just didn't see it. Not at all.

The first half of the game was a blast to play -- we're agreed on that much. But as the ratio between gameplay and cutscenes tipped further and further before toppling into the abyss, all I could think was how backwards it all seemed. Gamespot says, "For anyone who appreciates games that rise above the simple act of pushing a few buttons and pulling a few triggers, Metal Gear Solid 4 is a stimulating ride that you won't soon forget." I could not agree less.

"Stimulating" is the last word I would use to describe hour-long stretches without player interaction. In fact, this game could have used many more simple acts of pushing buttons and pulling triggers, because for the most part you don't do anything at all. I like a good cutscene as much as the next guy, but I was hoping the notion of "interactive movies" as something to strive for had gone out with the Sega CD.

The whole thing has caused me to rethink my stance on the entire series. I loved the first Metal Gear Solid without reservation. I hated the second one, mostly because I didn't want to play as Raiden, but also because the story went so far off the rails that I had no idea what I was doing or why. I always assumed that Sons of Liberty was the aberration. But then I could never get into MGS3, again because it was so front-loaded with cutscenes that I was unable to get into the rhythm of it each time I tried to play. Now that MGS4 has similarly failed to work for me, I have to conclude that the original was the exception.

The data doesn't lie: I'm not a fan of the series. It feels like I just found out I was adopted.
Posted by Mitch Krpata at 8:53 AM

Etelmik said...
This comment has been removed by the author.
10:17 AM

I couldn't agree with you more. although i did like MSG2. Never minded Raiden or the story. Even the cut scenes were a great way to break the tension. For me it was MGS3 that broke something with the long cut scenes and now MGS4 just made me realize that maybe i'm not the fan i thought i was. Being 28 and having a job also means that when i buy i game, i want to be able to actually play the damm thing. MSG4 is just too frustrating forcing the player to the long cut scene in order to enjoy the game as a whole.
I like (love even) a good story and MSG always delivered that. So i delved in the game hoping to play just that, a great game with a good story. MSG4 proves to be both just not together. It's an excellent game but there isn't enough of it and it's an excellent story but with a game attached to it that ruins the experience.

I totally agree with your take on MGS4-- once you hit the second half of the game things really slow down, and its only dramatic register is ham-fisted melodrama. (I have been going back and finishing GTAIV and damned if it doesn't make that game's scripting and acting look good.)

On the other hand I think you're missing out on MGS3. I had a similar initial reaction where I was brought by a dead stop by the game's early sections, but if you push through some initial frustration and figure out the quirks of the game's mechanics it has a lot to offer in terms of gameplay. (the camera in the subsistence version helps in this effort) It's a shame that MGS3 is so damned obtuse at first, because the narrative tone is generally high-spirited camp and less tiresome in comparison to 4, which really takes itself too seriously.

I think we're all a little too eager to anoint the new saviour. For me, it happened with Mass Effect and GTA4: the euphoria and excitement took over and I was already proclaiming it as my new gaming samsara a couple days into it.

The flaws were apparent, sure, but I was willing to forgive it-- less so as I continued to play it. Which is why I've always looked forward to your reviews because you usually publish them later than the other sites. You're able to go past the hype and the excitement and actually see the games for what they are, not what we want them to be.

CP, that's an issue I still struggle with, too: It's just not possible to devote the kind of time to some games that the designers seem to intend. Any time a game doesn't give me the option to start and start wherever I want, that bothers me. Maybe technical challenges would prohibit it, but it would be great if you could save your Metal Gear game in the middle of a cutscene.

I liked MGS2 a lot. I don't know why everyone is having such a problem with Raiden. I couldn't break into MGS3 at all, too difficult trying to sneak around and too frustrating going to the pause menu to change camoflage all the time.