Anyone can play guitar 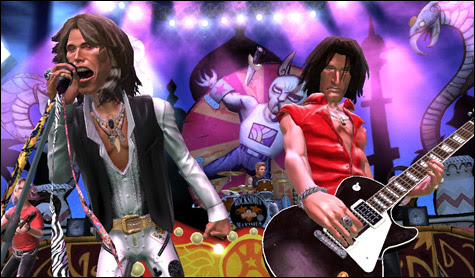 Above: Steven Tyler's had so much plastic surgery that he doesn't even look human anymore.

My review of Guitar Hero: Aerosmith is up now at thephoenix.com. The short version: It's not the worst Guitar Hero game ever made (that honor goes to On Tour, and Rocks the 80s was also worse), but it's symptomatic of the series' downward trend.

In some ways, the Aerosmith edition is almost better than Guitar Hero III: Legends of Rock, because the difficulty level makes more sense, and there's only one guitar battle -- which is still one guitar battle too many. But a music game lives and dies by its tracklist, and this is one of the weakest yet.

Strangely, though, I seem to have gotten much better at Guitar Hero during my most recent sabbatical from playing. I shredded my way through Aerosmith's hard difficulty without any trouble. Then, because the tracklist was so sparse, I popped in Legends of Rock and proceeded to slaughter a bunch of songs that had been giving me trouble before. If you recall, the difficulty in that game suddenly skyrocketed in tier 7. Well, suddenly I found myself five-starring "Stricken" and "Before I Forget" after limping my way through them months before. I don't know what happened. Best not to question it.

Still didn't have the balls to attempt tier 8, though. I'm not a masochist.
Posted by Mitch Krpata at 8:47 AM

Actually, I've found that in absence I get better, too. In fact my skills seem to improve every time I go back to playing my REAL guitar after a month's rest from it.

Maybe it's that your fingers have time to recuperate, maybe picking the game up fresh erases wrongly learned muscle memory from repetitious fuck ups, maybe it's the will of the Gods.

STILL haven't played Aerosmith yet. My guitar is still bust but I'm considering taking a crack at it again using a controller. Lord knows that will fail, however, as I'll probably end up swapping out Aerosmith for the PS2 game Amplitude.

HapiBlogging to you my friend! Have a nice day!