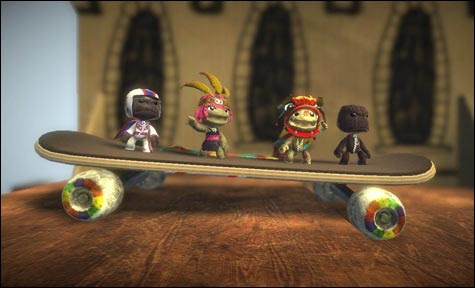 Above: Ain't these just the cutest little suckers you ever did see?
Hello there. Do you like videogames? Would you like to know what videogames are coming out for your favorite systems this fall? Why not check out the Phoenix's 2008 fall videogame preview?

As you might have inferred from last week's post -- or from the piece itself! -- I had a hard time getting energized for most of this year's selections. Last year's was such a strong lineup, and the year before that we had the launches of the PS3 and Wii to look forward to. This year, you've got mostly sequels: Gears of War 2, Resistance 2, MotorStorm: Pacific Rift, Rock Band 2, Guitar Hero World Tour, and Fallout 3* all appear on the list.

Some new franchises are on the slate, of which LittleBigPlanet strikes me as the most promising. (My interest in The Force Unleashed wanes by the day.) Mirror's Edge also looks striking, but that's got my vote for game most likely to be delayed until 2009. Dead Space and Left 4 Dead both look solid, though hardly revelatory -- finally, someone had the balls to make horror-themed shooters!

As Matthew Gallant notes, previews are busted even when they are laudatory. Still, what does it say when I can't gin up excitement for anything based on preview copy? I hope to be pleasantly surprised by many of these games. Otherwise, it's going to be a short best-of list come December.

*Granted, Fallout 3 isn't quite like its counterparts here. Enough time has passed that a Fallout sequel is necessary and welcome.
Posted by Mitch Krpata at 10:09 AM

It's a shame that the Wii holiday lineup is such a wasteland. All in all this is looking like a season to catch up on old games and, most importantly, save some money.

Then again, it's not exactly a "fall" release, it's out this month!

I'm looking forward to Mirror's Edge, Fallout 3 and Dead Space the most. Those three titles seem to be the only to take a step in a somewhat new direction. New gameplay mechanics, new approaches to tried and proven formulas and most likely very good stories.