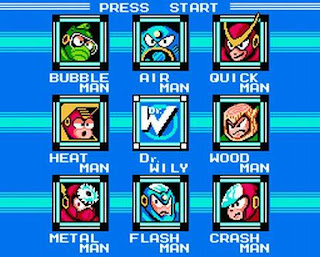 Above: There are places I remember / All my life, though some have changed / Some forever, not for better
I've been playing Mega Man 9, and enjoying it -- mostly. But there's an unintended consequence of my playing this game: It's causing me to re-evaluate my relationship with Mega Man 2.

Along with Contra, Mega Man 2 is my favorite NES game. Both are considered among the most difficult 8-bit games, but I can beat each one without breaking a sweat. That's not thanks to any particular skill on my part. It's because I played these games until I knew every screen by heart. Playing them isn't a matter of reacting to what's happening onscreen. It's all muscle memory. I know every move my enemies make before they make it. I know what hazards will appear onscreen at each moment. I can leap with confidence to platforms that haven't even appeared yet. I can fire at the exact location my offscreen foes will be seconds from now.

I can tell you everything you need to know about Mega Man 2 more easily than I can remember my family members' birthdays. Beat Metal Man first, then use the Metal Blade to defeat Flash Man, Bubble Man, and Wood Man. The Wood Shield takes down Air Man, whose Air Shooter makes short work of Crash Man (hang onto those Crash Missiles; you'll need them in Dr. Wily's Castle). Use Flash Stop against Quick Man and Bubble Lead against Heat Man.

In Dr. Wily's castle, the Quick Boomerangs will dispatch both the flying dragon and the Gutsdozer with ease. Use Metal Blades to knock off the second stage boss, and Crash Missiles against the fourth stage boss (hot tip: to avoid getting hit by the converging fire from the latter boss, pause and un-pause the game as quickly as you can until the rounds have passed through you). To destroy Dr. Wily's ship, first use a charged Atomic Fire to blast away the hull, and then go at the cockpit with Metal Blades. To defeat the final boss, Bubble Lead is your way to go.

I say all this not because you need to know it -- you probably knew it already -- but to demonstrate how reflexive one's knowledge of an NES game had to be. For me, that was partly a result of simply playing the same games over and over for weeks or months at a time. But it's also what was required to beat these games. You had to know them inside out. They were littered with traps that would be unavoidable unless you already knew they were coming. Unless you could traverse the levels with your eyes closed, you couldn't do it at all. With minimal extra lives, and a frequent "game over" screen, getting through a Mega Man game was a matter of attrition.

This is still the case with Mega Man 9.

As others have noted, and as I will note in my review, Mega Man 9 is a perfect emulation of a Nintendo game. From the graphics, to the sound, to the level design, you could have told me this game was originally released in 1988 and I'd believe you. That's the argument in the game's favor. It's also a stark reminder of how games have changed since then -- for the better, I'd argue.

There is a feeling of accomplishment in getting through a tough game, sure. And the platforming challenges and boss battles I've encountered so far in Mega Man 9 aren't all that difficult from a purely mechanical standpoint. They just require a little planning and practice. (An early example: In Splash Woman's stage, you drop from one screen to the next. If you are not already pressing left or right on the d-pad when the screen scrolls, you will not have enough time to avoid hitting insta-kill spikes.) But this method of level design feels cheap to my 2008 self. Why shouldn't I be able to hang back and regroup? I've seen the "game over" screen more after three levels of Mega Man 9 than I did in the entirety of BioShock.

Still, my enjoyment of Mega Man 9 increased when I decided to hit up GameFaqs for the optimal stage order. For a minute I felt like I was cheating somehow, but then I realized: I never figured anything out in Mega Man 2 on my own. Not a thing. Not only was I told which weapon to use on what boss, I even watched my friend Ryan go through all the levels before I ever completed any of them myself.

There's the basic truth of this: In all my warm and fuzzy memories of Mega Man 2, I cannot remember a time when I didn't know all there was to know about it. That level of mastery colors my perception of the game, as it has for the past 20 years.

Now? I may be able to look up strategies to help me get through Mega Man 9, but after that I'll be done with it. This has to do with how games have changed, and how I've changed as a player. What this game has done is convince me that if I played Mega Man 2 for the first time today, I wouldn't like it very much. I can't imagine anything sadder.
Posted by Mitch Krpata at 9:00 AM

3 was really my first, but I became really familiar with 2 later.

Personally, I'm just excited to see if I've still got it. The great and rare thing about the old-style is that they were still fun, even if you lost. It's hard to find any new games that are legitimately difficult and yet not stressful.

I'm planning to write my own blog post soon on the subject, but I think you're right when you say you wouldn't like the game that much.

I played through the game for the first time this past weekend. Outside of a previous attempt on the Anniversary Collection, I had no knowledge of the level design for each stage or what weapon beat a particular boss. It probably took me five hours, but I managed to finished it. Overall, I was left rather underwhelmed.

Maybe it's because I'd playing MM9 up until that point, a game that in my mind is exponentially more difficult (outside of Quickman's stage, that is). Maybe it's because everyone on the internet has built the game up as the be-all-end-all of Mega Man games. But I think the biggest fault in the game is the weapon balance.

Throughout the game, if you have the correct weapon to defeat a particular boss, they go down in 3-4 hits (2 hits if you're fighting Crashman). This, combined with how little certain weapon ammo is depleted (e.g. Metal Man's weapon). Only the final boss felt reasonably balanced to me, where the Bubble shot does slightly more damage than the Mega Buster.

This isn't to say that MM2 is bad; it just feels very primitive to me, or at least compared to what I'm used to in a Mega Man game (I grew up playing 4-6). Perhaps Mega Man 9 is souring my judgment, but I think perhaps we need to reevaluate Mega Man 2 in a modern context rather than blindly loving it because of nostalgia (FFVII, I'm looking at you as well).

I never remember Mega Man 2 being hard, certainly not like Mega Man 1 was with its giant Yellow Devil and one-eyed, one-legged hopping monster robots. I've only tried the demo of MM9 so far but it was so hard it immediately forced me to change my "must-buy" opinion to a "wait-and-see."

However, over at MTV Multiplayer they suggested that the demo features one of the hardest stages in the game. I guess if I had to start playing MM2 with Quickman or Woodman, I might be this frustrated too.

PS: Metalman first? Airman's a pushover with the Buster and then you have Item-2 to skip over the hard parts of other stages.

Ninjeff, you're probably right about the balance -- just look at how useful the Metal Blades are throughout the game! By contrast, I don't think I ever used Crash Missiles except against that one boss in Dr. Wily's Castle

@feitclub: Heh, I didn't mention it in the post, but I was sure someone would have a different strategy than me. But the Leaf Shield just obliterates Air Man!

Hey Mitch, sorry for this method of contact, but can you ping me at Crispy Gamer when you have a moment. Can't find your email anywhere. I'm the EIC and the email address is under the About us page.

Nice review, Mitch. The game certainly is difficult and I think over time we've gotten used to games getting easier... so this is a nice surprise. I must admit I probably wouldn't be playing MM9 if I didn't feel accomplished after beating each level though.

By the way, what system(s) are you all playing it on? If you don't have a PS3 or Xbox 360 yet, I suggest you take a look at this Stacker 2 6 Hour Power t-shirt designing contest going on right now where you can win the system of your choice. There are less than 400 entrants. Here are the details: http://www.brickfish.com/Entertainment/Stacker2?tab=overview

I work with 6HP so let me know if you have any questions about the contest. Be sure to tell me if you enter too, and I'd be happy to vote for your designs. Good luck, fellow Rockman fans.

Well i will have to admit it that i havn't ever played Mega Man and never really thought about it... Maybe i should try or maybe i can't be bothered... I don't know, i am not even sure why i am wirintg this comment because it obviously has not point...