F.E.A.R. 2 review; or, How I reached so hard for an analogy that I sprained something 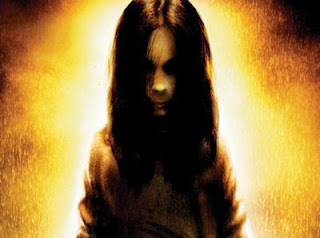 Above: She's so creepy! Isn't she creepy?
My review of F.E.A.R. 2 is up now at thephoenix.com. In the course of writing it, I went back to read my review of the original F.E.A.R. to see if there were any useful comparisons to make. Instead, I found that both reviews were nearly identical, except for one specific complaint about the first game's control scheme that has been rectified for the sequel.

Each game has the same, difficult-to-define problem. You can take it apart, look at each component, and like what you see, but when you put them together something is missing. The shooting action is good, with solid enemy A.I. and really well implemented grenades. The bullet-time is neat looking. The scares are occasionally effective. These are all things I like. But I don't like the game very much -- or, more accurately, playing through both F.E.A.R. games, I felt as though I should have liked them more.

This is something I have a hard time expressing without the use of analogies, so here's one. I like pizza. I like spaghetti. I like ice cream. But I don't want to eat a spaghetti-and-ice-cream pizza. That's what this game is.
Posted by Mitch Krpata at 1:00 PM

Funny you should use a food analogy, I've heard the game described as a trip to Burger King as opposed to a regular restaurant. Sometimes it's just what you're craving, but after you leave, you know that you could have had something better if you really wanted.

That is a much better analogy. That's perfect.

I like FEAR 2 much more than games like Dead Space and the new Prince of Persia: Both soulless, heartless experiences. But I agree that FEAR 2, a game I played for hours and hours and then abandoned altogether, is somehow not quite right.

Part of it for me is narrow corridors they send you through, even outdoors, that is more like a good haunted house than an actual game.

And yet I found myself lost and clueless at times, not realizing I could point at a particular pixel to run the elevator or whatever.

In the first FEAR I found that things could be spooky or actiony, but never both at the same time, and it felt like they were trying to splice a decent survival horror title and a decent shooter together my intercutting frames rather than just make a horror shooter.

More of the same this time around?

My reaction to the FEAR 2 demo was that it compromised the best parts of the original, and didn't take a single forward step.

The first game was a brilliant shooter on the PC. I've played it three or four times, in spite of an admittedly awful plot and oppressively monotonous (and wholly unconvincing) level designs. When the bullets started to fly in the first game, it was one of the greatest shooters ever made.

So with the second game, this should have been a no-brainer. Get some better writers who can help their characters locate their missing souls, put together a plot that isn't so half-hearted, and create a more vibrant and interesting world for the player to inhabit.

What we seem to have received, however, was a game that plays like a bad console port on PC, while remaining totally unremarkable on the 360. So the one thing the original did right has been cast aside to make it more console-friendly. Meanwhile, not a single of the original's serious problems has been fixed.

I feel like the real problem is not that it's a spaghetti and ice-cream pizza. It's the fact that the designers are standing there at the table like an anxious wait staff that wants to make sure you see how much great food they have on the menu, so they taking your plate away at random moments.

"And here we have this delicious pasta, yummy yummy! Okay, done with that, now try the sorbet. Fantastic isn't it? Here comes the ragout! And I think I see a canoli hiding behind it. How's your beer? Let me top that off with some whiskey."

I think what the game lacks is character. It's just not a very interesting world.
So the analogy you actually would have wanted to use is this:
The game is like a spanking hot woman you have terrific sex with but her personality is so boring that you're not intersted in a long term relationship. Which would also explain why it's fun tu return to F.E.A.R.2 every once in a while even after having been through with it ;-)

I agree with Carlos, and I think that's what Mitch is trying to express here. I haven't played FEAR 2, but I felt this way about FEAR. I started playing it, but couldn't finish it. It just wasn't that interesting... I didn't feel compelled to keep going.

Anonymous said...
This comment has been removed by a blog administrator.
3:55 AM