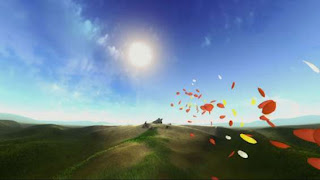 Above: Flower is a sweet game. That is not opinion. That is fact.
We live in an upside-down world, one in which power-hitting steroid users tell kids that performancing-enhancing drugs will ruin their lives, and bank CEOs lecture homeowners on personal responsibility while lobbying the government for multi-billion-dollar bailouts. And we live in a world where PS3 fanboys are so desperate for respect that they're pinning their hopes and dreams on the one thing video games do not need: another first-person shooter.

Look, Killzone 2 might be a great game. I'm looking forward to playing it. But in the perverse and often baffling world of fansites and message boards, it has become the central front in the PlayStation 3 offensive. Why? The Xbox 360 has plenty of grim shooters. PS3 partisans' desire to have what 360 owners have, only better, will never be satisfied. There's always another GAEM OF TEH YEAR OMG BEST GAME EVAR right around the corner.

But so many wonderful things are happening right now on the PlayStation 3. The PlayStation Network has become a boutique the likes of which Xbox Live Arcade and Nintendo's Virtual Console can't match.* In a world that made sense, PS3 fanboys would be shouting from the rooftops about Flower. They'd be challenging the "Xbots" to match that, you jerks!

Here is a game that is utterly unlike any other on any system, and which is unlikely to be followed by imitators any time soon. It's transportive, exhilarating, even moving. Yes, it's simple, and no, it doesn't use 100% of the Cell processor's capability. Nor, I must sadly report, is there any way to "teabag" other users' flowers in a multiplayer mode. Nobody is trashing it in a cheap ploy for pageviews.** It seems to be drifting through the consciousness of the average gamer on a gentle breeze of its own.

My request to PS3 owners: give Flower a try. If you truly care about discovering what makes your console worth owning -- if your top priority is finding great games and not swinging your dick around on the Internet -- then play this game. Make Flower a hit.

Besides, it's only ten dollars. If you don't like it, I'll give you your money back.***

*Which is not to overlook the many gems on both of those platforms, too. I tried out Death Tank over the weekend and it was a blast -- literally.
**In fact, Edge gave Flower a 7/10, the same score they gave Killzone 2. This... is... a... lie!
***Disclaimer: If you don't like it, you actually owe me ten dollars.
Posted by Mitch Krpata at 9:00 AM

Flower is amazing, so soothing and addictive and surprisingly poignant. There are a lot of high-profile releases to play right now but I keep returning to Flower. Is it a system-seller, though? I'm sure the type who'd drop $400 on a console in this environment are more likely to be into the generic shooter than a peaceful, serene downloadable title. The people who'd most fall in love with Flower will never get to play it.

I was explaining Flower to a coworker who plans on buying a PS3 soon, and he cut me off halfway through the first sentence. He called it a word synonymous with Liberace, and it wasn't candelabra. He'd totally play the hell out of Killzone.

The system-seller game is a myth. Games do not sell systems. MINDSHARE sells systems, and right now, chasing after the 360's tail instead of being confident in what the PS3 does well is killing its mindshare. I completely agree with Mitch here. The PS3 has its own unique catalog that appeals to a different set of people than those that rush out to buy Gears of War 2 OR Wii Fit.

Cumulatively, the PlayStation Network games probably should be a system-seller. But there is a disconnect between touting a system for its unbelievable hardware potential, ten-year lifespan, etc., and then trying to say that your strength on the software side is artistic, low-budget indie games. If you're going to say to people that the best reason to buy your console is an abstract, ten-dollar "tone poem," as I've read it described, then it's hard to also convince them that they need a $400 HD Cell processing behemoth to play them.

Call me skeptical but I can't help but feel that if it wasn't for the PSN games -- Flower, Pixeljunk Eden, EchoCrome and so on -- then what would the PS3 have, exactly?

To contradict myself and answer my own question, it would have LittleBigPlanet but my point is that Sony are very lucky to have the games that they do available on the PSN. Otherwise they are just relying on their franchises (as good as they may be) or third party titles.

Don't get me wrong, I love my PS3 despite only owning it for a couple of months but there is just something about the lineup of games overall for the console that is, well, baffling. Quality can be found, but where's the defining stuff? Oh I don't know, we're getting there, slowly. The console really needs games like Heavy Rain and whatever Team ICO are cooking up to come out, though...

then what would the PS3 have, exactly?

Valkyria Chronicles. I got sick of waiting for GT5, the appeal of Little Big Planet wore off after a while, and MGS4 wasn't the kind of game I felt like ever going back to, but if anything made me happy I spent $400 on a console -- anything other than the Blu-Ray of Blade Runner, at least -- it was a cel-shaded, tactical RPG/third-person shooter hybrid set in an alternate-universe WWII with unstoppable god-powered superbeings instead of the A-bomb. It has one of the greatest scores, one of the best graphical styles and some of the most interesting characters of any game I played this decade. It's also the greatest yet most poorly-promoted wrong-console-exclusive title Sega's put out since Jet Set Radio Future.

I owned a PS3 for several months in 2008 and bought a host of PSN games as well as Metal Gear Solid 4, Gran Turismo 5P, Drake's Fortune, the Formula One game, and many, many others. Overall I wasn't impressed.

But you know what? I'm glad that Sony makes PSN games that are different and that they find an audience for them. But just like the Wii isn't for me, neither is the PSP or the PS3.

I come from an Amiga/PC background, Western gaming damn it, and so my leanings are closer to what the Xbox 360 delivers. I primarily want to play RPGs, but I'll play shooters or adventure games and I love racing games.

The PS2 used to deliver the best JRPGs in the business, and if Sony can get good RPGs back onto its platforms, I might possibly consider buying a PS3 again.

Steve, your question "then what would the PS3 have, exactly" is a good one. I remember when XBLA carried the 360 for many people. While some of them waited for the next shooter or for GTA, they found arcade titles and played tons and tons of them.

PSN can at least give PS3 owners something to do while they wait for Final Fantasy or whatever. The PSP helps bridge that gap too.

Curses! All this talk of Flower is slowly convincing me the the PS3 isn't merely an overpriced hunk of over-engineering!

But yeah, Flower puts Sony is a strange position. If it is as awesome as everyone tells me, they should definitely promote it. But I think the problem is they simply don't know how to. They've sold the PS3 as this cutting edge, hardcore, hyper-up-to-date polygon-crunching machine, and Flower...well it doesn't exactly pump out the polys.

People don't realize it now, but the 360 was in this position at the beginning too.

Not only did MS had tons of hardware problems, and not just the RROD. I ran mostly into DVD drive and freezing problems myself. But there weren't many games.

Now the hardware is relatively stable, and it's cheap, and there's tons of games, but it really did have the advantage of coming out first.

I don't know what the answer is for the PS3 but it's really not lagging behind that much. I think the perception is it's a failure, and there still aren't enough games, but it is a good system.

Is the PS3 some marvel of engineering that is head and shoulders better than anything else? Nothing is like that. But it's a good box and Flower can only help it succeed as far as I'm concerned.

I guess the question is this do you see any release that will please people enough to say: Okay now, the PS3 has finally arrived?

I don't see it happening on any platform. This is a different market now and there's so few exclusives and what exclusives do exist don't seem to matter a whole lot unless you are Nintendo.

Unfortunately I won't be buying Flower anytime soon, simply because I have too many other games to complete ATM. The same for Noby Noby Boy as well which is a shame. :(

I have played fl0w and Pixel Junk Eden significantly and love them for their lack of interface and clutter. It allows you to self interpret what you are playing instead of the game continually affirming everything for you.

As for the PS3/360 discussion. One of the reasons why I am so fond of the Playstation 3 is that the system and its exclusive software has a much stronger global taste, instead of feeling engineered to please Americans. I think Flower, Resistance, MGS4 and the Pixel Junk stuff and others all do this in their own ways, which makes them more intersting for me personally. Killzone 2 on the other hand, does not, and I have no interest in playing it (beyond the demo which was uninspired).