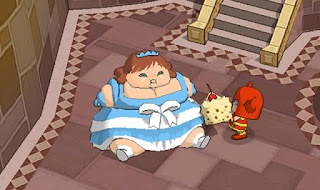 Above: Just more of her to love.
Video games are supposed to be fun, but with some notable exceptions, this does not conform to my experiences with them. Playing video games is tense, hectic, and draining. Video games make me angry. They make my heart beat fast. They frighten and excite me. They seem, while I'm playing them, like the most important thing that anybody in the world is doing right at the moment. But fun? I don't know. It's hard to have fun when the stakes are so high.

That's why Fat Princess is so much fun, and also why I'm not finding myself called back to it despite my enjoyment. The rules are standard capture-the-flag fare: You need to rescue your own princess from the opposing team's castle, and prevent them from retrieving theirs. Once you hold both princesses in your castle for a short period of time, you win. But this isn't the fast-paced CTF style I remember from my obsessive Quake 2 period. There is combat, which is mostly automated. You lock on to a nearby enemy with the left trigger, and press one of two attack buttons. Little skill seems to be involved.

Where Fat Princess diverges is in its jobs system. At any time, your elf can pick up a particular hat to change his class. Not all classes are suited for storming the opposing castle. At the beginning of every match, most people on the team grab the engineer hat, then head out into the forest to cut down trees for the lumber they need to upgrade the castle and equipment. These upgrades eventually result in each hat granting its wearer more powers: the archer gets a musket, the warrior's strength increases, and so on.

It doesn't take long for everything to be fully upgraded, and at that point the game opens up a bit. And unlike more tactical FPSes, Fat Princess seems to encourage players to go their own way. You can pick a job to do, and keep at it regardless of whatever else is happening on the game board. But -- and here's the key -- doing so still helps your team. Bringing the Princess cake will cause her to gain weight, making her harder to carry out of your castle. If you want to spend an entire round humping slices of cake across the board, instead of taking a traditional attack or defense role, you can do that.

There is something satisfying about working behind the scenes in a team-based game such as this. Let everyone else take the glory -- I'm quite happy to repair the castle door. Still, that does eliminate those one-in-a-million moments that mark the best multiplayer games, when you bank a grenade just right, or capture the flag with a sliver of health remaining. The quotidian flavor of Fat Princess makes it an easy game to dive into and enjoy, without ever forcing you to take notice.
Posted by Mitch Krpata at 9:00 AM

This is why I didn't enjoy this game. I felt like I was a single unit in an RTS game; like nothing I was doing was impacting the course of the game significantly. The simplicity of the combat also makes it quite repetitive and uninteresting.

The more I hear about this game, the more it sounds like a game I'd want to enjoy but can't. I have similar problems with the poster above when it comes to team-based games, despite really enjoying team-based sports. Maybe it's that I never really feel part of a team in a team-based game, especially if that team is full of strangers, which it so often is.

Somewhat off-topic, but my best Q2 CTF moment by far was chasing down the flag carrier underwater in Q2CTF4. I completely ran out of ammo, was trying to grapple closer, hit him in the back with the grapple for the kill.

God, those were the days. Only game I was ever good at.