How PopCap blew a sale of Bookworm Adventures 2 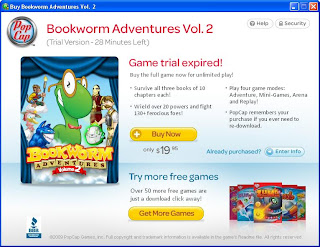 Above: The scene of the crime, in grisly detail.
Bookworm Adventures 2 sounded right up my alley. You spell words in order to attack monsters. That's what my dreams are like every night. How could this game fail?

I decided to give the demo a spin. PopCap promised 60 minutes of gameplay, which, coincidentally, is exactly the same model that hooked me on Fairway Solitaire about a year and a half ago. I started playing, and Bookworm Adventures seemed to be delivering. With each lovingly crafted word, my little worm transformed into hammers, wrecking balls, and other instruments of death, as he lay waste to one folkloric foe after another. Even better, the killing blow sometimes came in the form of hilariously inappropriate words, like "taint." Truly, this was a game for me.

Suddenly, and without warning, I was kicked out to the desktop. I'd been enjoying myself, but I didn't think I'd gone the full hour yet. By my estimation, looking at my computer's clock, it was more like 32 minutes. Even according to the game's own count, I was correct. It's right there in the screen capture atop this post: "Trial Version -- 28 minutes Left."

Somehow, right beneath that, it also says "Game trial expired!" That's just not true. I can't imagine why it would give me contradictory information, for one thing, or why it would flat-out lie about the length of time I'd spent with the demo. All I know is that I've tried to launch it again, and it tells me I've got to pay to play.

Bookworm Adventures 2 is only $19.95. This is not a lot to spend in order to bash in the Big Bad Wolf's brains with my taint hammer. I'd estimate that, had the demo run the full 60 minutes, the odds of my purchasing the full game were running around 90%. But because PopCap couldn't even deliver the demo they'd promised, I lost faith in a full-length game justifying any purchase price. The whole thing left a bad taste in my mouth.

So that's why I'm not buying Bookworm Adventures 2, and why PopCap is out my twenty bucks. I'm sure they will be crying themselves to sleep about this, on top of a pile of money.
Posted by Mitch Krpata at 9:00 AM

Echo said...
This comment has been removed by the author.
9:49 AM

According to the game you had played 32 mins, hence having 28 mins left in the trial. But yeah, dog move by Popcap.

I got my full 60 minutes, but I was also offered a free game in addition to Bookworm Adventures 2 when I purchased it.

The e-mail that offered the free game never came, so I contacted support. They responded within hours and send me a link to the free game I wanted.

So PopCap is okay in my book! I also like receiving 5 licenses when I purchase their games so I can install it on multiple computers, though that feature may not seem quite as shiny when the licenses run out.

I should mention that I attended a college that did not have a math requirement.

Thanks for pointing it out. I will now edit the post in such a way that your comment ceases to make sense.

Oh great, now I sound like a PopCap salesperson and I've also admitted to playing Bookworm Adventures 2 on multiple computers.

PS: send=sent in my first comment. I'm glad I didn't criticize your math while confusing my tenses.

Only tangentially related to Bookwork Adventures 2, but in case you don't see it regularly today's Dinosaur Comics strip is about casual gaming. Not as riotously funny as his usual, I'm afraid.

isn't that nitpicky...? reminds me of a friend of mine, very nitpicky friend... he never had any fun in his life

I'd guess you just played to the end of the first level, which is fairly easy to do in an hour. You could replay that level for the rest of the hour, I'd imagine.

Funny, I had almost the opposite problem with the demo. I played the full hour, and made it halfway through the first world. Except I didn't know it was only the first world at the time so I was left thinking that I beat half the game in about an hour. I'm not a person who frets overmuch about the length of games, but a $10/hour ratio makes even a short-game lover like myself balk a bit. Now that I've learned the game is three times as long as I had thought, it's sounding a lot more reasonable. I'm fully expecting to buy it on a whim in a weak moment of boredom any time now.

Penny Arcade's Tycho had issues with the warp tiles that change your letters, and I'm inclined to agree with him. Building absurdly large words isn't the only enjoyment I derive from the game, but if that ability is removed or longer than a level at a time I could see losing my patience very quickly. Unfortunately my demo timed out on the boss of the first level with an abundance of warp tiles, so I'm not sure if I just need to push through or if it proceeds to get worse. The warp tiles and the length concern are the only reasons I didn't immediately click through to buy when the demo ended.

I bought it sight unseen a couple of days before it officially launched (weird preorder process and all) and got a free game too.

My wife loves these games (I don't play them) and will get 2+ years of game play out of it. Instead of complaining just buy the buy, okay Mitch?

It should be clear by now that I'm a tightwad of the highest order.

I've never had a problem with their 60 minute trials. Perhaps you should try another of their demos and see if this is a recurring problem.

What's funny is that in the rss feed from your blog, all the ads in the bottom are for the game. Hahaha.

Hmm. If you click them, maybe I'll be able to afford the game!

Seems like a bit of a silly thing to get up in arms about, but on the other hand it's a pretty stupid bug to have. Have you tried contacting their customer support about it?

I can only assume the actual cutoff was something like "an hour, or x% into the game, whichever comes first," but that they neglected to say as much.

That makes a lot of sense. As I recall it happened in the middle of gameplay and not the end of a level, which is what I'd expect if it were a percentage of gameplay. You could be right, though.

More generally, I hope it was clear from the post that this struck me as an amusing quirk and not a cosmic injustice. Even if it is true that I would have been more likely to buy the game after 60 minutes.

he and she reviews said...

I don't really like word games... can't spell to save my life but i thought this post was very amusing to read because it would be totally something i would write if it happened to me. ^_^ kudos.

Bookworm adventures 2 is a ripoff, too short and I completed it within a couple of hours. All I got at the end was, to be continued. Just glad I didnt pay for it. If you like these sort of games, download it for nothing.