In praise of shade, complexity 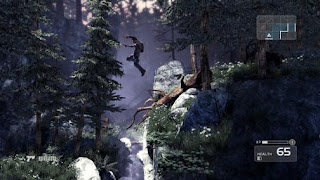 Above: A different screenshot from Shadow Complex.
My review of Shadow Complex is up now at thephoenix.com. Despite yesterday's comments about Metacritic, you will not be surprised to learn that my score, and my sentiment, lands squarely in the mainstream. As a longtime Super Metroid fan, I'm quite happy to play a game that doesn't diverge too much -- okay, at all -- from that formula.