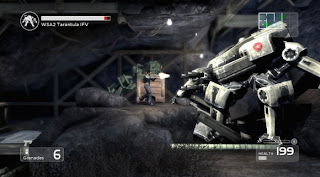 Above: Hateful, anti-robot bigotry.
Just kidding. There is no violent hate speech in Shadow Complex. But there has been some minor controversy around the game, due to its affiliation with science-fiction author Orson Scott Card. I should say up front that what little I know about Card is based on hearsay. I know Ender's Game is considered a classic in some circles. I know that he wrote some or all of the Insult Swordfighting lines in The Secret of Monkey Island, a debt I will never be able to repay. And I know that an awful lot of people I respect consider him a crackpot.

Card apparently has a history of borderline insane comments about homosexuality, abortion, and the dangers of liberalism. I have not read his book Empire, which created the universe in which Shadow Complex takes place, but my understanding is that it tells the tale of a second American civil war, in which the un-American bad guys are a far-left group called the Progressive Restoration. I got that from the Wikipedia entry, and am not qualified to comment further, except to note the irony of a conservative warning about the dangers of politically motivated violence from the left, considering the past 20 years or so of American history.

Shadow Complex sidesteps most of these concerns. Yes, the bad guys are still the Progressive Restoration, and probably want to institute mandatory abortion and recycling laws, but in practice they're your usual video game foes: faceless drones whose only talent seems to be dying in dramatic ways. We hear bits and pieces about their grand plan, usually as our hero, Jason Fleming, is sneaking through vents and overhearing their conversations. The dialogue is boilerplate evildoer stuff, no more plausible than the rantings of an old-school Bond villain. Despite the creators' use of Card as a publicity tool, his involvement was minimal.

Which is basically the same as every other video game ever made.

The Progressive Restoration plans to nuke the gay-friendly city of San Francisco first -- an odd choice for such a left-wing group, so long as Houston, Texas still stands. But if that's the extent of Card's homophobia coming to the fore, then I think I can live with that. Every city deserves a chance to be the terrorist target in a book, movie, or video game.

The content of Shadow Complex itself may not be the main concern. The real issue, as eloquently laid out by GayGamer's Dawdle, is whether we ought to be rewarding Card with our money. It's a tough one. We should be rewarding the people who made Shadow Complex, because it is fantastic. Plenty of people worked on this game who don't share his beliefs, including the game's real writer, Peter David.

If some fraction of our dollars ends up in Card's bank account, that may be the cost of doing business. I could try to stop patronizing any business that employed people whose politics I disagreed with, but then I would have to drop out of civilization altogether, move to a cabin in the woods, and write angry but lucid tracts about industrial society and its future.*

Dawdle's solution is pretty simple: If you're against what Card stands for, but for awesome video games, consider tossing a few bucks in the till of your favorite LGBT charity when you buy the game. Not a bad idea. But I'd like to think that we can have it both ways. We can use the sweetness of Shadow Complex as an opportunity to discuss great game design, and to remind the world that Orson Scott Card is a hateful homophobe. It's the best of both worlds.

The progressive restoration begins now, my brothers and sisters!

I honestly couldn't understand why they even bothered connecting themselves to the books. The game's plot was basically, "Dude, they punched your girlfriend". The only moments of commentary on politics are just your generic "We want them to think we're liberators" type stuff. They might as well have just changed all the names and saved the licensing money.

Are we sure that every developer we do give money to supports "our" causes?

I tell my daughter to try to ignore an artist's life because you will often be disappointed by who they really are. Enjoy the art!

There are too many people sure of what's right and wrong in the world and I try my best to ignore them.

L.B., that's a good point. I guess that's why any licensing deals happen.

Gary, I agree. I try to take stuff at face value. If there were something objectionable in the game, I'd say so (obviously), but I didn't find that to be the case. That said, I'm sympathetic to people who don't wish to support Card's endeavors. And I think it's always helpful to be able to have conversations about what our cultural values are, since art so often holds up a mirror to them.

Mitch, while I agree with you, and I would personally avoid art by white supremisists, for example, or by someone who hates Jews, it would have to be overt for me to react.

For example,,I have been listening to Neil Young's music for 35 years, through hippiness, pro-Ronald Reagan years, and lots of other weirdness, but the music is too good to worry about what is going on in his head!

Which is basically the same as every other video game ever made."

This is the first I'd heard of Card's politics. It makes me very sad indeed that the man behind the original insult swordfighting is a bloody twat.

Still going to play Shadow Complex though. Because fun is fun.

I recently came accross your blog and have been reading along. I thought I would leave my first comment. I dont know what to say except that I have enjoyed reading. Nice blog. I will keep visiting this blog very often.

I am curious of what you all think about what it means to label something as "hate speech". As an Independent, I feel isolated from the liberal side of things when words like "hate" are used to demonize enemies for political or ideological reasons as opposed to the being open-minded. From what I've read, OSC is not hateful, just presenting his beliefs. I don't agree with them, but I'm not going to paint him with the denigrating term "hate-monger". I find that calling someone a "bloody twat" (as a post above said of OSC)is much more hateful than questioning a certain line of logic concerning homosexuality and providing your own views, however flawed.

Also, from the article that the link goes to, OSC writes that "They have never directly harmed me, nor I them. Many have helped me in my life -- and I them. We get along just fine."

This Mr. Show skit sums it up quite well: http://www.youtube.com/watch?v=3Q4txN1ut20

It's semantic sleight-of-hand to say that what OSC seems to believe, and be working for, isn't hateful because he doesn't swear or raise his voice. Somebody whose words and deeds are aimed at disenfranchising an entire class of people would be objectively hateful in my book. The quote that you cite is just another in the long line of arguments that if they'd just stay in their place -- "they" being whatever group is suffering discrimination -- everything would be just peachy for the rest of us.

In other words, like the New KKK spokesman says in the skit, "I don't hate anybody. Don't have to love everybody!"

I'm an atheist who has spoken my whole life against the excesses of religion. My teenage daughter calls herself a Christian despite the culture or lack thereof in our household.

I don't hate Christians but I often hate Christianity and other religions that force themselves upon us. I have a history with the church because in my mid-twenties I spent several years as a born-again Christian.

Suffice it to say you could call me hateful if you wanted to. You could call a vegetarian who shows distaste for meat eaters hateful, or someone who hates the music of Journey as hateful.

I imagine we are all hateful in one way or another, even if we consider ourselves peacemakers.

So while Orson Scott Card may or may not be a hater and may or may not deserve to be boycotted, all I know is the game doesn't seem to do anything any worse than any other game I play where I kill endless numbers of enemies.

I have always wondered if the children of atheists would rebel by finding religion. Now I know!

Thanks Mitch. You're observation is astute, for sure. Thanks for the link, too. I enjoyed that!

True, oftentimes people are wolves in sheep's clothing. But my point is only in focusing on our own personal actions in the face of those things we know are wrong, being wary of our own prejudice and pride. How do we live together in times of crisis without making it an "us or them" state of being? Are our actions comprised solely of reactions, never independent of what others do or say?

And, more importantly, how do we live in a world where others have already made it an "us or them" state of being without waging our own war? Could you forgive those that you know are fostering ideas that are harmful? Would you become like them, instead? I believe we can all rise above the lies of being married to our opinions and ignorance.

I am absolutely disgusted by what you had to say Gary. Your comment is both hurtful and totally unfounded. I would even go as far as saying that you are factually incorrect...

I just want to point out that A) The Game Shadow Complex never once connects the story to any kind of homosexuality...San Francisco AND New York are targeted, not because of their high percentage of homosexual residents, but because trhey are home t o a large number of politically active people who are dissatisfied with our government and B) The article you so poignantly linked to using the words "Orson Scott Card is a homophobe" is not exactly what most intelligent people would call "hateful" it is simply a representation of the facts. People who actually care about what the story of Shadow Complex hints at should read "Empire" as it is an excdellent political intrigue novel with no mention of homosexuality whatsoever.

Please try to remember that not every political story has a "gay" agenda, and that not everyone who doesn't yell "whoo homosexuals yay" is a homophobe. Also, Shadow Complex is easily one of the best games I've played in a long time.