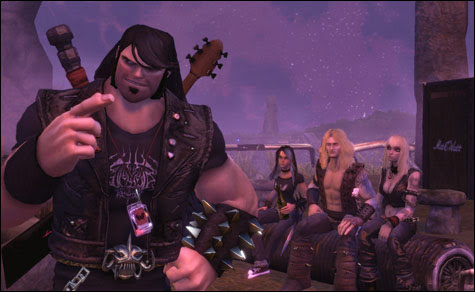 Above: A game whose promotion you are already sick of.
It's September, so it must be time for my fall video games preview in the Phoenix. Given that you use the Internet, I imagine there is not much news in this piece for you. It's a snapshot of the biggest games coming out this fall, at least as I interpret them from looking at Gamespot's "new releases" section. That means it's tilted more toward big-budgeted titles whose art will look good in the paper. I'm not passing any kind of value judgment here; I'm just telling you what it is.

The fun for me is finding out which game gets delayed immediately after the preview goes to press. One year it was Bully, and one year it was Super Paper Mario. It's also enjoyable to see what game I overlook that ends up knocking my socks off. In 2007, I failed to mention Call of Duty 4; last year, I couldn't spare the column inches for Far Cry 2.

There's no doubt that this year is lighter on big names than some past years, but I've been doing these previews since... 2005, I think, and only in 2007 was I genuinely enthused about the selections. (With good cause, as it turned out.) I still think it's a blessing in disguise that so many games have been delayed, giving us more time with the games that do come out this fall. There's plenty to be excited about, too. I'm always up for first-party Sony titles, Valve has never stepped wrong, and it's an Infinity Ward Call of Duty. I mean, come on.

Still, I look forward to the real work, which will be playing and reviewing these games. That'll be much more fun.
Posted by Mitch Krpata at 9:00 AM

For me, only Alpha Protocol and Dragon Age: Origins are truly drool worthly.

Need of Speed: SHIFT is very good so far, and I'm looking forward to Forza 3.

IL-2 Sturmovik is very good, although it's not some absolutely amazing game. But it's very well done.

Although I'm sure Call of Duty: Modern Warfare 2 will be very good, since I don't do multiplayer, it's hardly worth $70 to me. If my brother ends up wanting it and will either split the cost or pay for it, then fine. Otherwise, it will be a used purchsase.

For context realize that although I bought and played to completion the first COD: Modern Warfare, I wasn't floored by it. It was good, even very good, but not great. And since I don't play multiplayer, it held little value after the initial six hours I put into it.

I'm looking forward to Alpha Protocol as well, but I'm really looking forward to Brütal Legend. Unfortunately, since my only modern platform is PC, I'm going to have to wait for that one. Either that or buy a 360, which is highly unlikely given my poor student status.

To me Brutal Legend looks like a total mess. IF I loved heavy metal and IF I loved adventure games, it might be one worth buying regardless.

But my best friend likes heavy metal just fine and absolutely loves adventure games and even he doesn't believe it will be any good.

I do hope it's fantastic and sells well, but I am wary of it.