Bayonetta: It's just so awesome 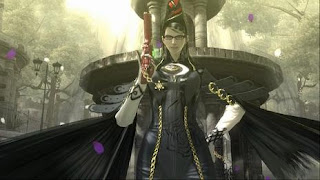 Above: Fox News contributor Sarah Palin
As promised, my review of Bayonetta is up at thephoenix.com. I am fairly certain that you will not read another review of this game that includes the phrase "weird otaku crap" in the opening paragraph. Dismissive? Maybe. Hilarious? Absolutely.

But this game is an absolute blast to play -- at least, it's a blast when you're playing it and not watching cutscenes. It's funny how I can play a game like God of War and complain that I keep getting locked into rooms with endless waves of enemies, and then play Bayonetta and complain that it isn't constantly locking me into rooms with endless waves of enemies. Every time Bayonetta steps away from its combat, it suffers, if only a little bit. That's not a slam against the rest of the game. It's praise for how much fun it is to fight.

I've played and appreciated some Devil May Cry and Ninja Gaiden games before, but I think I'd take Bayonetta over either of them. It does some of the smaller things better than those games did. For one thing, the game camera is really good. At first, I wished there were some kind of lock-on mechanism, but then I realized what a fine job the camera was doing of keeping things in focus. It keeps the character well in frame, and rotates smoothly to keep the action centered.

The camera also helps by swinging to show where the next threat is coming from. On normal difficulty, foes don't swarm you, but neither do they all hang back waiting for you to finish comboing one of their allies. The camera is smart enough to give you a hint about where you should be looking next. That, combined with the other visual and audio clues about who will strike next, means you don't have to stop and re-calibrate in the middle of a fight.

I remember Ninja Gaiden II, especially, had such a bad camera that it never seemed to show you what you needed to see. Only once in Bayonetta did that seem like a problem, against an enormous boss relatively early on. It's so big that you can't actually see when it's about to strike, so beating it takes guesswork. But that's the exception.

And I appreciated that Bayonetta was not painfully, absurdly difficult. I died a lot, but the checkpoints were so forgiving that it wasn't frustrating. Usually it puts you right back where you were, even letting you restart midway through a boss fight. I loved Devil May Cry 3, but I never could finish it, because even getting through one level of that game was so draining. With Bayonetta, the difficulty was just right, and I spent my time being exhilarated by the moves I was performing instead of stubbornly trying to advance to the next checkpoint.

All in all, I'm a little surprised by the reception the game has gotten -- its 90 Metacritic score includes a 10 from Edge, of all places -- but then again I can't remember the last game of this genre that was better. It certainly wasn't Devil May Cry 4.
Posted by Mitch Krpata at 9:00 AM

but then again I can't remember the last game of this genre that was better. It certainly wasn't Devil May Cry 4.

The best I can come up with is Godhand, but that's stretching the definition of "genre."

I hope this game finds the commercial success it deserves. This is basically the best action game I've played since, um, ever. The aesthetic of the game might not be your cup of tea, but at least it's not Dante's Inferno. My enmity towards that game comes solely from the previews and screenshots, but it's a powerful enmity, and if that grotesque slab of cynicism outsells Bayonetta, the world will have officially gone bananacakes.

I like Bayonetta a lot, though I'm not sold on it being better than DMC4.

I'd definitely say my initial playthrough of Bayonetta (on normal) was more fun than my initial playthrough of DMC4. My worry lies in the fact that on Bayonetta's harder difficulties, certain enemies are immune to witch time (and on the hardest difficulty it's completely disabled). This seems like a terrible design choice, as it doesn't just make the game harder, but less fun by eliminating the game's core mechanic.

By extension, DMC4 had a lot of problems the first time through: recycled environments and enemies, unclear level design, tedious fetch quests, unbalanced difficulty, etc... Oddly enough, all of these nitpicks went away on the harder difficulties. You still had to fight all the same enemies and bosses as Dante, but realized that you had to employ vastly different strategies- something that made me appreciate the boss design all the more. The obscure puzzles were no longer an issue as after the first time, I knew where to go. And the move set got more complicated, so playing as Dante was a far more interesting challenge than the button-mash-fest it was on normal.

I'm only midway through Bayonetta on hard and still liking it a lot. I'm just not sure the game's legs are as long as its heroine's.