Bayonetta: It's just so embarrassing 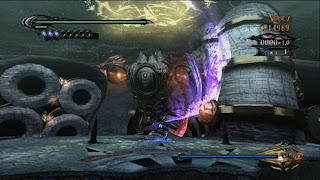 Above: An unrepresentative, non-embarrassing screenshot of Bayonetta.
Later this week I'll be posting my review of Bayonetta. Sneak preview: it's positive. The action is terrific. But Bayonetta is an absolutely silly game, and I'm not using silly as a compliment. I've been surprised to see only Gus Mastrapa truly slam the game for its ridiculous style. Many reviews I've read mention that maybe the aesthetics aren't for everyone, but those same reviewers seem to suggest that it is for them.

Like Gus, I had a hard time with Bayonetta's style. Unlike him, it didn't prevent me from enjoying the game. But there were long stretches where I couldn't resist the urge to turn away. It's not just that the dialogue, the acting, and the storyline are awful, though they are. The actors in this game seem to be reading the script for the first time. They can't agree on how to pronounce some of its made-up words. They have appallingly awful accents. During the story segments, it's as though you've taken a time machine back to the 32-bit era, when voice acting and "cinematic" stories were a newfound possibility, only nobody had the slightest idea how to do them well, so you got the kinds of audio atrocities we're still making fun of today.

The cutscenes are at least skippable. (Though I never did skip them, even as I found myself checking email and Twitter rather than paying attention to them. Why that seemed like the better option, I'm not sure.) But you can't skip several of the other terrible presentational choices. You've got the merchant who says one of the same three things every time you go to visit him (the nod to the much worse merchant in Resident Evil 4 was nice, though). You've got enemies that look like penises and flying boats with bearded faces and other things I lack the vocabulary to describe. You've got a truly cheesy soundtrack that I think we're supposed to enjoy for camp value, which is probably the case with the whole game.

Games are hard to enjoy for camp value, much more so than movies. A game that succeeds at doing so, like No More Heroes, does so because it comments on the things it's presenting. I didn't feel the same way about the lunacy in Bayonetta because I never could quite tell what the intention was. It seems to be humorous, but what's the target? It's not enough to make cheeky references to other games in the dialogue, while also trying to tell an apparently straight mother-daughter story, while also letting you play as a sexy librarian witch with gun boots.

I almost wonder if the smooth and intricate gameplay is part of the problem, thematically. I still haven't been able to adequately explain, even to myself, why I was so enamored of the awful overworld and mundane side quests in No More Heroes, except to say that everything in that game felt of a piece. That's not the case here. The combat engine is an example of game design at the very highest level. It is so good that to surround it with such silliness makes it look like a three-story mansion in a neighborhood of one-story ranch houses. This game does not go together.

With all that said, I still like Bayonetta a lot, and when the review goes up, I'll explain why in a little more detail.
Posted by Mitch Krpata at 9:00 AM

I'd love to understand what so many people saw in No More Heroes. I understand that it employed a deliberately awful aesthetic ("it's not a bug, it's a feature!"), and I get that it presented a cynical "meta-commentary" on video gamers. Both of those attempts failed miserably, in my opinion, but suppose I grant you those anyway. Nevertheless, the one unforgivably damning problem with No More Heroes is this:

It is persistenly, painfully, overwhelmingly Not Fun. How could anyone enjoy this?

You've been pretty skilled at breaking down your personal reactions to some other games. If you ever figure out how to explain the near-universal critical appeal of this one, please do! I would really like to "get it".

I don't know, I thought the Beam Katana beat-em-up sections, which made up most of the gameplay, were extremely fun. They made use of the Wiimote without asking it to do things it wasn't capable of. Sure, it wasn't much more than button mashing, but it was varied enough that I stayed interested. And the boss battles were generally clever and surprising. It wasn't the kind of thing where boss five was the same as boss one, except blue.

My Western gaming sensibilities tell me this is another reason I won't be playing very many Japanese games in the future.

Even Final Fantasy XIII is a rent/not buy for me.

I owned a PS2 in the 2004 - 2006 range of years and loved many a JRPG, and even a few Japanese action games, but anymore the Western developers create everything I could possibly need.

And that's not necesarily a slam on Japanese games. I just don't appreciate them, and I definitely don't need them.

It's interesting that you compare Bayonetta unfavorably to No More Heroes as that was the game Bayonetta reminded me of most (in terms of its writing at least. The gameplay is vintage Kamiya with DMC being the most obvious inspiration). Both games were ridiculous and over-the-top, and poked fun at game conventions. I could understand finding Bayonetta embarrassing if you were showing it to someone who hasn't played many games, but to someone who is familiar with the genre, I think it's clear that it's all parody.

I button-mashed through the first couple of levels, then I had to actually learn how to play, and that's when it got good.

I am continually impressed by how fast the game makes me feel. As a gamer, I am... not fast. So that is a nice change.

The actors in this game seem to be reading the script for the first time. They can't agree on how to pronounce some of its made-up words. They have appallingly awful accents.

Also, @Kirk Hamilton -- that very description makes me want to play the game.

Well, I would have to point out that might have more to do with the culture. Having started to play bayonneta, I find in it a big of the kitsh japanese cutlture that is really big there.

ANd i have to say, after living in the US and in Europe, the approach to the japanese culture is really different. It seems that the american view on the Japanese culture has been limited. If you look at the different piece that drives japanese culture outside of the border, american market has been reduced to politically correct Manga or animated movie (*and mainly sci-fi driven).
That probably due to teh puiblisher choice that had to compete with all the serious young culture in the US in the 80/90 (the strong presence of comics, etc...)

But when i look at all the manga and cartoon we have imported from Japan in Europe (Especially France) I have to say that i don t have any problem with bayonneta. For me it does fit in a part of their conventionnal culture. and there is nothing wrong with the main design set ( story, soundtrack, Design, chracter behavior).

Now i gave you that the acting is really not there...
But then, would you blame a game ( and a dev team) for something they have no power on?
Would you have focus on the "weird and boring" cutscene if the dialogs were well done?

Unknown said...
This comment has been removed by the author.
1:14 PM

Despite this being a month old post I came across on google, I still feel the need to comment. Especially since you're making your claim in January 2010, rather than sometime in 2009 or late 2008 when most of the other preconceived notions of "It's too much", "I don't get it" and "It's just a clone of [x]" seemed to be appearing online... long before the game had ever been completed, I might add. What's your excuse? You've had time to see passed the marketing and see it for what it really is.

Incidentally, stop calling it a clone of DMC anything... they're similar because they were designed by the same guy. Hideki Kamiya, the designer, barely even had time to describe the premise before people started getting offended and anal-retentively feminist about it... for fuck sake, I've heard WOMEN gamers say Bayonetta is a strong female character with a modern (though exaggerated) take on how sexual women are now.

Bayonetta was designed to be beyond over-sexed and it absolutely does NOT take itself seriously. I mean look at it. The first moment you turn it on, it just grabs you by the face, shakes you around and shouts "LOOK HOW GAUDY I AM! LIGHTEN UP, IT'S A JOKE. PEOPLE USED TO TAKE THIS KIND OF THING SERIOUSLY AND, GRAPHICALLY, NONE OF THOSE GAMES WERE WORTHWHILE THEN! YES IT'S FILLED WITH DIRTY JAPANESE CULTURE NUANCES BUT IT'S A FUN GAME. GET OVER IT AND PLAY."

Right when the logo appears... you hear "Bayonetta" in a lusty voice, you press start and KASHIIIIING, it zooms into the vagina shaped thing in the O. Honestly... people not getting it are all facepalm worthy. Especially reviewers who SHOULD get this kind of thing by now. Then again I've always wondered about just how much people who say "camp" and "kitch" can ..."get".

Hmm, that was a lot more than I anticipated writing. Oh well. Also I won't be reading your full article, though I'm sure it's up by now, so if you addressed all the things I've pointed out, I guess I'll never know.