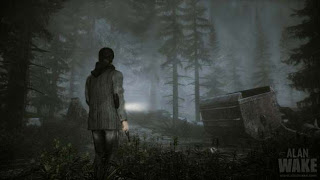 Last week, for the first time in awhile, I played a video game. It was Alan Wake. I liked it. Maybe it wasn't as epochal as I might have hoped from a game that was five years in the making and that was pitched, if not necessarily as a killer app, then as a defining console exclusive. That's okay. Not every game has to rewrite the rulebook. Alan Wake is a good, solid shooter, with good, solid controls, and a good story that is more wobbly than solid.

The graphics are terrific, and I mention that not because the game is pretty to look at -- although it is -- but because the high-tech visuals are there in service of the gameplay, not as a substitute for it. In a game about light and dark, it's important for the light and dark to look right. They've never looked better than they do here. Flashlight beams, road flares, and far-off neon signs really do seem to be burning through a living darkness. There's a tactile sense to it all.

And even though the story is hard to follow, maybe that's okay. I suspect it would be less satisfying if I understood it. Still, this is manifestly a narrative game. Alan follows linear paths almost exclusively, with brief diversions to pick up supplies that never take him too far off the road. He picks up his cell phone without player input in order to hold long conversations. Many of the most interesting things Alan does happen only in cutscene form. The game is split into six episodes, none of which takes longer than about an hour and a half, and even if you immediately start playing the next episode, you get a "previously on Alan Wake" recap that's straight from television. Yes, it's clear that Remedy's primary aim here was to tell a story.

Yet the developer apparently didn't have enough faith in the power of their labyrinthine plot to compel players to repeat playthroughs. Instead, they populated their brief game with 100 barely hidden collectible coffee thermoses.

Look, I'm not against hidden items. Alan Wake's world is also dotted with portable radios, which you can turn on and listen to a local radio show. This serves a couple of purposes: one, the host is a minor character in the game's plot, and listening to his program sheds a little light on the spooky happenings in Bright Falls. Second -- and maybe this is just a personal thing -- late-night radio is really, really creepy, and it suits the game's atmosphere perfectly.

But these thermoses... yeesh. I don't know if they serve any purpose beyond the inevitable achievement for finding all 100. Maybe there's a status boost or something. Sure doesn't seem like it, though. They seem to be there only as an incentive to explore, which would be fine if they added anything to the game, but the reason to look for thermoses is just to look for thermoses. That's a nicely rounded circle that Remedy has drawn, but it's kind of like a perimeter fence.

Furthermore, having things like collectible thermoses can undercut the forward motion of the plot. At one point, Alan was charging into a cabin while somebody -- Barry, maybe -- was calling for help upstairs. Bam! goes the front door. Alan storms in, flashlight beam and pistol at the ready. Barry is screaming his head off. And instead of running upstairs, Alan notices a thermos, and takes a detour to pick it up. Then, for the hell of it, he rummages around the entire first floor of the house, looking for Energizer® batteries (hopefully the longer-lasting lithium variety!).

Eventually, the sound sample of Barry's cries for help stops playing, but there's no reason for Alan to stop looking for ammo before going upstairs. Barry's not going anywhere. These are the value systems video games are still working with. Even the "serious" ones.
Posted by Mitch Krpata at 9:00 AM

I must say, over the weeks I have been pretty worried about whatever happened to Mitch Krpata. Beyond the video game commentary, I always enjoyed your friendly, simple writing style, and you just come across to me like a good person. I don't expect you to shed any more light on the circumstances than your first sentences let on, but it's good to hear from you.

I also completely sympathize with your reticence to the collectibles. For me, even if I COULD just ignore them, the "shiny trinkets" (props to VVVVVV for naming them as such) never cease to disrupt the flow of games like Uncharted 2, where focused pacing is supposed to be the "point". Someone has put them there ; it HAS to be part of the intended experience, right? But too often the joke is on us.

I frankly hope developers eventually cease this kind of artificial, distracting padding, or at least leave it for a second playthrough. Heavy Rain for example, as different as it was from other games, gained a lot from being devoid of such BS ; it was up to the player to dig as deeply as she felt inclined to, to the risk of hitting a wall and shattering the illusion. Among many issues, games have to stop screaming "achievement" and "100% completion" at every step of the way if they ever are to become something more.

Coincidentally, no less than five minutes ago, I was talking to one of our artists about exactly this. I can tolerate hunting for the missing pages, but the pointlessness of the thermoses absolutely grates. It's lazy, diffident design. And you're exactly right that it does harm to the pacing and tone of the game.

The only thing more egregious is getting an achievement for watching a fucking Verizon ad.

Don't get me wrong, I'm actually digging Alan Wake quite a bit. Above all else, it captures the quiet menace of the dark forest well. But god damn, I can only shake my head at some of these decisions.

(Glad you're back, by the way)

Thanks, Louis. I actually wanted to make the Heavy Rain comparison, too, but dropped it because I thought it might detract from the point for readers who didn't like that game. But it's totally true: the story in that game was moving ahead with or without you, so you had no choice to try to hold on as tight as you could. And of course there are countless games where the whole point is just to muck about having fun and exploring. Alan Wake is so clearly not one of them that it feels wrong to be poking around dark corners instead of running to the next safe haven.

Nels, the manuscript pages work much better because they're an integral part of the story. Yet you can still ignore them, if you want to, and blast your way through the game. That makes much more sense. Maybe you've decided while playing that Alan is too fearful of what he's reading on the pages to keep picking them up. (That might fall apart with some of the cutscenes, but what the hey -- it's somewhat logical.)

There's also an achievement for shooting beer can pyramids. I didn't realize that until too late, when I shot one randomly and noticed the save icon in the corner. I know when I'm traipsing through some haunted woods, pursued by an all-devouring dark force, I always feel like doing a little target shooting.

Louis F, don't worry about Mitch, he has this bandanna that grants him infinite ammo.

From what I've heard, Alan Wake was originally designed as a sandbox game, it seems like a few elements got left over when it was put on tighter rails.

I second that emotion. I remember sprinting across the top of a Dam while being chased by a terrible black whirlwind...

oh my god it's right behind me run run run

Hold up a sec, lemmie grab this thermos. Okay, gotta stand so it's highlighted, press the button...

Heh. At least the achievement for collecting enough thermoses is a pretty funny Twin Peaks reference.

Good to see you back, Mitch. I'd wondered where you'd gone. :)

You obviously enjoyed the game more than I did, but I absolutely agree with you on the collectables issue. I think, if you're going to have a game that leans so heavily on its atmosphere – that wants to make you feel pursued, a sense of urgency – to have these collectables that reward slow, meticulous, methodical exploration is self-defeating. It certainly felt that way for me, anyway, and I'm glad you called it out as well.

Happy to have you back Mike! I made more or less the same conclusion after playing Uncharted 2. Collectibles have become an industry standard while in most games they don't fit very well. But I think I need to write a follow up post because I really liked the collectible system in Batman: Arkham Asylum. Mostly because one of the collectibles in that game is a map of each area where all the hidden positions of other collectibles are marked. It is a very clever way of avoiding players in to consulting youtube or walkthrough.

If anyone likes to give my uncharted 2 post a read (yep self-publicity 2.0, ladies and gentlemen): http://noblemeninpyjamas.wordpress.com/2010/01/01/falling-of-a-non-existing-ledge/

Thing is, folks love these collectibles. They'll play game several times just to get them all. I have to wonder if narrative-driven games would be better serviced having these collectible items an optional toggle or simply hidden until the second playthrough. I don't care for achievements and their ilk, but I can't lie -- several times during Alan Wake, I'd ignore the narrative thrust to grab a thermos. It's embedded in our DNA.