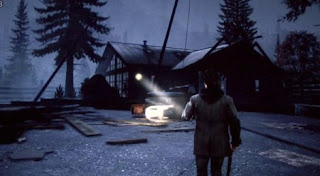 Above: Flash! Thunder!
My actual review of Alan Wake is up now at thephoenix.com.

I think it's worth spending even a little more time on the lighting. The game plays around with lots of different light sources, primarily Alan's flashlight, but also including road flares, flashbangs, street lights, car headlights, neon signs, spotlights, and many more. Each has its own look and feel, and in a way the lights almost become characters. When Alan lights up a flare, it's nearly as blinding for the player as it is for the Taken. Watching the flare gradually fade and sputter, taking Alan's temporary safety with it, is a tense experience. You find yourself willing it to stay lit just a while longer.

That kind of thing is important, because the shooting itself is pretty easy. There's a heaping helping of auto-aim, and there wasn't a single moment when I felt like I had to conserve my ammo or my batteries. The limited resource Alan has is light, but only when he's got multiple enemies on him. It's very easy to kill one or two enemies, but when four or five are onscreen it's usually better to say the hell with it and run. I still might have preferred to feel a tad more desperate in the course of things, but to me it's always a plus when I can actually get through a game without tearing my hair out.

This is the second game this year, after Deadly Premonition, that is apparently bursting with references to Twin Peaks. Not having seen the show, I can't say myself whether that's true, but it does raise an interesting point: I should probably watch Twin Peaks.
Posted by Mitch Krpata at 9:00 AM

cheap mp3 players said...
This comment has been removed by a blog administrator.
2:11 PM

srmsoft27 said...
This comment has been removed by a blog administrator.
3:01 AM

srmsoft27 said...
This comment has been removed by a blog administrator.
1:49 AM