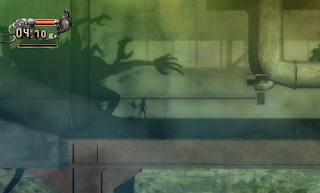 Above: Cool shadow, bro
My review of Lost in Shadow is up at Joystiq. I'm trying to remember the last time my reaction to a game followed a similar trajectory to this one. Generally, after a couple of hours, my mind is 90% made up and the rest is a matter of details. Sometimes, games get better after you become more familiar with them, and that can take a long time. In this case, I felt like Lost in Shadow was flirting with greatness at the start, then settled into a trough of acceptable mediocrity, before, eventually, I wanted the damn thing over with.

The things that are good about Lost in Shadow never get better after they're introduced, while the things that are bad about it keep piling up. You can put up with rudimentary combat for a time, awful hit detection and all, but by hour 10, and your second sword upgrade, you ought at least to be able to make contact with your foes more than half the time. And there's very little variety in the enemy type, which wouldn't be a problem if the combat were more fun, but it gets to the point where you return to an area to find all the enemies have respawned and you can't help but sigh.

I'm a sucker for games that look pretty -- that may not have the most graphical horsepower under the hood, but that have interesting and inspired art direction -- and Lost in Shadow does. It definitely cribs from the Ico playbook, but I'll take that over another space-marine corridor shooter any day. And its beauty isn't skin-deep. Forcing your mind to understand the connection between the three-dimensional objects in the foreground, and the two-dimensional shadow in the background, is challenging and novel.

It's because this game started out so strongly that I ended up so disappointed. I really can't recommend Lost in Shadow, especially not at the retail price, but I'm not sorry I played it. An interesting failure can be the most valuable kind of game.

And, hey, it was better than Limbo.

I'm disappointed that you're disappointed, Mitch. This looked really cool and interesting when I saw the trailers. :(

It's one of the cool game I have seen. Thanks for the review, I'll check on this and will surely play this one.