Before I say anything else about Mass Effect 2, I'll say this: I played the whole thing. I can't say the same about many games, especially those that nobody is paying me to play. All told, it took just under 30 hours. I explored every star system I could get to. I completed every mission I found. Whatever criticisms I am about to make, that counts for something.

After all of it, I'm still not sure what to make of the game. None of my complaints about ME2's interface ever subsided. Quite the contrary, I kept discovering more of them. Some of the choices that BioWare makes, while not terribly significant on their own, defy logic. Consider: To upgrade your equipment, you need to mine planets for natural resources. This takes the form of a fairly boring mini-game. 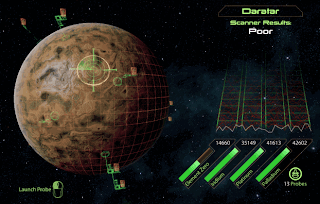 That picture is from the PC version, but it looks the same on the 360 version. I'd like you to take note of the graphs on the right side of the screen. The one on the top shows the prevalence of each type of mineral as detected by your crosshair, which you can see on the surface of the planet to the left. As you move that target around, you'll see spikes and dips in the measurements.

You can tell, relatively, that you're likely to find a certain element when there's a spike. But you have no idea how much. There are no numbers assigned to each step on that scale. Further, the Y-axis is represented in a quasi-3D way, seeming to lean into the screen and away from the player. The vertical segments shrink as the chart gets higher, which may indicate a logarithmic scale, but probably not. Lastly, the graduations fade into nothingness instead of reaching a hard upper limit. It does not make sense.

At least that scale doesn't really need to make sense. All you need to know is that when there's a spike above Palladium, you fire off a probe. Boom -- you've got Palladium. The designers have exchanged usability for flashiness, sure, but it doesn't really harm the experience. Your goal is to mine for resources, and you can do that.

Such is not the case with the green bars underneath it. Those indicate, or are supposed to indicate, the quantity of each element that you already have. The quantities are represented as bar graphs -- they start empty, and fill up with a solid green color as you acquire more of each resource.

It may be hard to tell unless you click on the image above, but take a look at those bars and the numbers beneath them. The bars for Iridium, Platinum, and Palladium are all full, and yet their actual quantities vary: 35149, 41613, and 42602. respectively. Furthermore, the leftmost resource bar appears at least half-full, yet the count is only 14660. What's going on here?

After playing the whole game, I can safely say that the answer to that question is: who the hell knows. All of the bars fill up by the time you get about 25000 of each resource, but there is not actually a limit to how much you can collect. By the later stages of the game, I was rolling deep with about 150000 of everything. The bar graphs had long since ceased to be useful.

I thought it was perfect when, at the end of the credits, I was presented with another choice. I could either continue the game I'd been playing, and finish exploring the galaxy and completing sidequests, or import my powered-up Shepard into a fresh playthrough. Pretty basic, right? But when I saw the button prompts, I was only about 70% sure which was which. There was "(A) Continue" and "(B) Main Menu."

In other words, only one of the button functions I was presented corresponded to the options I'd been given. The other one bore no relation to what I might have been trying to do. The description of my choices had not included the main menu. I had no idea what might result from my inputs, thanks to the confusing, contradictory, and incomplete information on the screen.

And that was Mass Effect 2 in a nutshell.
Posted by Mitch Krpata at 9:00 AM

You don't have to mine all the planets. Reading the planet codecs will tell you what kind of elements are on it. Planets that were once inhabited by advanced civilizations that are now extinct are the ones filled with Element Zero. They are usually in the sweet spot orbit of each star system.

My boyfriend's finger got extremely tired holding the LT while scanning each planet, so he rigged a rubber band around the controller to alleviate the problem.

Mining was so incredibly boring that he used to turn the game music off and listen to something on the media server library turning it into a more pleasurable experience. :)

Mitch, I'd love to see you put together a side blog compiling bad game design choices (in the structure of, say, Photoshop Disasters or the like). I expect you already have a bunch of start-up material in your archives (I'm thinking in particular of the infamous "3 hands on the controller" photo), and you seem to have a "gift"/"curse" for identifying these things.

It's true that a lot of your complaints about Mass Effect, for instance, are about minor details of the game, but they're also such boneheaded and avoidable errors that they really deserve to be called out somewhere.

This is a serious suggestion, by the way.

You played for 30 hours and that's all you can nitpick? I don't think the mining minigame is supposed to hold up to much scrutiny, it's a minigame.

I think you missed the link in the second paragraph where he nitpicks much, much more.

I could write a novel nitpicking this game.

The mining mini-game is definitely my least favorite part of ME2. It's boring, repetitive, but I especially hate the fact that you have to hold the LT button down. There is no conceivable reason for this, as the scanner mode should be active all the time, or at least toggled on/off. The suggestion about the rubber band is a great one if I ever play it again.

I could have gotten excited about the game on the PS3 if BioWare had said: "hey, everyone hated the planet scanning. . . fuck it, we'll delete it or automate it" and not "oh, we tweaked the speed to make it 'faster'".

I also second Dave's request doing a side blog or series of posts about bad game design choices. I didn't come across your "handy" Killzone sniper rifle guide until about a week or two ago, but that was unbelievably good.

You know, I played this game, and I loved it. Interestingly, as opposed to most people, not as much as I loved the first one. I thought the story in ME2 was not as good as the one in ME. And that's the point, my main point of reference to evaluate these games, for me, was the story.

Yes, ME2 improves in many aspects of the gameplay mechanics. But even so, both ME2 and ME are subpar compared to other games, mostly when it comes to the interface.

Let me give you an example, which is a problem in both games, but more severe in ME. In this game, the type of ammo you use, more than in other similar games, plays a huge role. Mostly, you have to be aware of what type of enemy you're fighting, whether it is organic or synthetic. If it is organic, you want flesh shredding rounds. If it's synthetic, you want piercing rounds. If you use the wrong type of rounds, you end up wasting a lot of ammo because the difference in damage is huge. On top of that, the game does a good job of mixing up the type of enemies. Now, you'd think that given this, the game would have some sort of interface to change ammo type on the fly (ME2 is better as you can bring up the abilities wheel and do it from there, still clumsy), but no, it doesn't. Not only that, but it is very tedious, because you have open the character menu, select weapon, and scroll through a whole list of accessories (which are not organized say, by type, like 'ammo') and select the ammo, only to have to do this 30 seconds later when a different type of enemy shows up. Even worse, sometimes they show up together, and then it is really annoying...

Even with all that, I still thought ME and ME2 were great games, because I just overlooked those problems to give way to the great story and the way it was delivered. I have to say though, the problems in the interface Mitch are real, and I encountered them (well, some of them). For example, I remember how annoyed I was in ME2 by one of the interface peculiarities he mentions in a previous post: how when you upgrade an ability, once you do it, you're kicked out from the upgrading menu, and if you want to upgrade something else, you have to go back in... really annoying. I am a computer scientist, and I kept thinking "what the hell were they thinking?". And yet, I wouldn't give this game less than 9/10... That's how good I think it was, despite all these problems...

It never ceases to amuse me when RPG's give the player some inept, arbitrary task to do, but of course they know everyone will do it like hamsters hitting the feed button. XP and rep grinds. Thousands of hours of copy and paste questing. Just look at archeology in WoW for God's sake. I picture a group of developer's in a meeting room somewhere; "What mind numbingly menial crap can we make these idiots do now?" All they have to do is wave the carrot. After realizing the countless hours I sank into doing stuff like ME2's 'planet scanning' I realized I wan't having any fun with crap like that, so promised myself I wouldn't jump through hoops that are just there to pad out games in a cheap and nasty way. ME2 is awesome. It didn't need the padding. If it's not fun to do its just bad game design.

This might just be me and a bit of ADD kicking in, but honestly, I liked the little minigames in mass effect 2. Though it is bad, it's a much better choice than piloting the mako that's made out of rubber and antigravity in the first mass effect.
Hopefully on the third game, bioware will get everything right.

I've heard of a lot of gamers getting hung up on stuff like this mining mini-game in RPGs. They feel this need to get the best equipment, so they spend hours boring themselves.

I think you guys have only yourselves to blame. If you spend more than 5 minutes at a time mining in Mass Effect 2, you are doing it wrong. There are always going to be parts of any RPG that are boring, repetitive, grindy, etc if you insist on doing them over and over.

Mini-games are meant to make the "crafting" experience more than just an exercise in button-pressing, and to offer a short break from the rest of the game, they are not meant to be entertaining for hours on end.