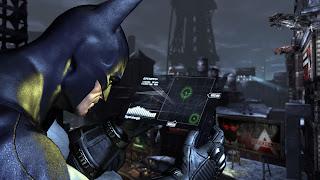 I felt the same way about the relationship between Asylum and City. The open world aspects diluted the tension and urgency in the story. There's a moment in there where you want to go save Talia, but Alfred/Oracle force you to complete objectives...except you can just go and fuck around for 20 hours looking for trophies if you want at that point. You could do that in Asylum too, I suppose, but the tighter spaces didn't encourage it

For me this is the best Batman, even the best Super-hero game ever made. the only thing that is missing is the Batmobile, taking that off I think it's a great action Game.