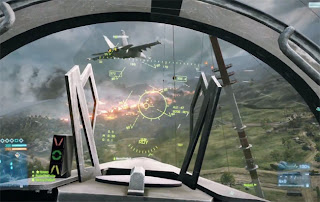 There's every reason to believe that the Battlefield experience will get better, and I hope it does, because right now the thin candy shell is not properly supporting the chocolatey middle. I don't think I'm done with this game, not by a longshot.
Posted by Mitch Krpata at 9:00 AM

As someone who's not interested in multiplayer at all it's such a bummer to hear that the singleplayer's kinda broken on this one.

The initial (gameplay) trailers had such a cool atmosphere it's so surprising that they apparently managed to mess that up.

It's super weird in way, the modern military setting seems almost at the end of its lifespan and I'm still waiting for that definite singleplayer experience.

The game does have some of that atmosphere, but it feels no more interactive than watching the trailers did. What you actually do is completely rote.

Call of Duty 4 nailed the single-player. Maybe nobody else has been able to because they're still trying to copy it.

Hm, I don't know about that to be honest.

CoD4 felt unique for the time, but it merely established all of the things that feel sort of lame and dated in singleplayer First Person Shooters today.

I guess I'm looking for a more authentic thing.

Especially with the modern military setting I'm feeling this weird disconnect where everything looks really realistic and serious but then the action still turns all Michael Bay at some point.

OF: Dragon Rising basically had what I'm looking for but it lacked the production value and was a little flawed from a design perspective.