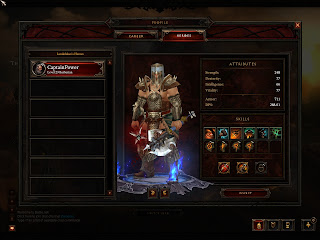 Above: My weak-ass dude, CaptainPower.

In an ideal world, Diablo III would be terrible. It is cruel of Blizzard to make a decent game whose name lends itself to so many putdowns:
Sadly, Diablo III is not terrible, and so I can't use any of those in good conscience. Still, as I play it, I find myself more bemused than anything, wondering, as I often do, why this is the game that sends so many otherwise rational people into fits of ecstasy. I'm sure I played one of the other Diablo games at least a little bit, but I have no equity in the series, and have come to it, for all intents and purposes, as a newcomer. My first takeaway: all these years, I thought people were joking about the clicking!

But click you do, over and over and over. On one hand, I'm blown away that it's possible to make a relatively complex game that is almost entirely mouse-driven. Your character's movement, your primary and secondary attacks, equipping items, dealing with merchants -- all performed with the mouse! Almost brings a tear to my eye. I'll gladly trade a little bit of precision for ease of use.

Sometimes, you trade more than a little bit of precision. One thing I've learned is not to get too carried away with the clicky-clicky, because it won't actually make my character move any faster. If anything, it makes him do things like wander in circles when he's supposed to be bludgeoning goat-men. It also took some patience to remember that the function of the mouse2 button changes on your inventory screen depending on who you're talking to, so if you try to equip an item you just bought from a merchant, you accidentally sell it back to him. Thank goodness for the buyback screen.

One thing you give up with all the clicking is a tactile sense of the combat. Playing Diablo III, I keep thinking back to Kingdoms of Amalur: Reckoning, a game that was structurally similar but that absolutely grounded me in its physical world. My character blocked attacks because I pressed the block button, and he dodged because I pressed the dodge button. When he failed at either, it was my fault. In Diablo, dodging and blocking are functions of your stats, and they're entirely based on probability. There may as well be little animated dice on the screen.

That's been my biggest surprise: the real "game" of Diablo is entirely in your character build. Everything that happens in the dungeons is a prelude to combining gear and powers in order to maximize your stats, which itself serves only to keep you alive long enough to find better gear. For veterans, I'm sure this is no surprise, but it took me a few hours of playing before I understood it, and it turned out to be the key to enjoying the game. I had thought that the point of picking up loot was the slot machine-like thrill of not knowing what you were going to get, but it turns out that browsing a merchant's wares, or leveling up your blacksmith, is just as important. Not so important: clicking on randomly spawning wasps and shit.

Speaking of random: I understand that it's supposed to be a selling point that all of the terrain in Diablo III is randomly generated, but playing through it I honestly can't see why. It's not as though there are puzzles and mazes and interesting things happening in the dungeons. They're just grids that get bigger and bigger as you progress through the game. They could be the same every time and I don't think you'd lose anything. Do I think the game suffers for this? Not at all. It's just one of those things that sounds really neat when somebody tells you about it, and then when you experience it turns out to be immaterial.

As for this always-on DRM thing, and the notion that the game is meant to be played with others, I dunno. I do find it pretty silly that I have died lagged-out deaths when playing by myself, and it's annoying that I can't pause the game for more than five minutes without my connection to the server getting cut. But I also can't get that exercised about it, probably because I've got mine and fuck all y'all what ain't got a big pipe.

The multiplayer I'm not so sure about. I've gone solo almost exclusively, and while there is something gratifying about having your brosephs and brosephinas fighting alongside you against Hell's minions, it also doesn't seem to affect the gameplay very much. There are some co-op tactics involved, and some characters have buffs and healing abilities for their allies, but it's not as though you combine powers into super attacks or anything. And there's nothing half as cool as the medic's healing bullets in Borderlands.

In the end, I feel like someone who listened to all the bands that the Beatles influenced before they ever heard anything by the Beatles. I recognize in Diablo a whole lot of things that I've enjoyed in other games, and here they seem somehow more primitive, because, in a sense, they are. Whether Diablo has been streamlined, modernized, dumbed down, whatever you want to call it -- it's still Diablo. This series has brought us many wonderful things, not the most important of which is Diablo III.
Posted by Mitch Krpata at 9:00 AM

I think the randomization is important because it changes the way to approach levels on repeat playthroughs. You can't just memorize what's where and formulate optimal paths. The closest you can do is to understand the way levels are generated and make educated guesses, which isn't exactly intense analysis but does engage your brain on a base level. Also on harder difficulty levels, an increasing portion of the fun is in getting surprised by packs of strong monsters and not knowing what or where they are enhances those moments. It's a far cry from its original roguelike inspiration, but I would enjoy the game significantly less without the randomization.