Flow and transcendence and wheelies 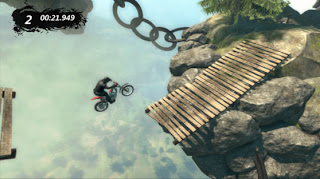 Above: A rider reaches the fourth stage of enlightenment, sick-ass jumps.

Back when Journey was the hotness, I was reading a lot of things about it that didn't match up with my experiences. People talked about the way it felt to play Journey in a tactile sense, how it "aspires to move players not through moral choices or exploration, but through the art of locomotion itself."

They talked about feeling a deep, unspoken bond with the other travelers they met on the way. "When One sat down in the shade of a giant pillar and crumbled into dust, I didn’t know what to do. No goodbye. Just oblivion. I looked at the spot where they had been for some time, dumbstruck and sorrow-stricken, waiting for them to come back. They didn’t."

As you know, I was not on board with Journey. I've had a lot of conversations about it, and I better understand now what people responded to, but for myself I felt like I was mashing the thumbstick in one direction and feeling pressured to submit to the significance of the whole thing. Still felt like a lot of bullshit to me.

Something funny happened recently. I played a game that made me feel all the things people said they felt about Journey. I became one with the landscape. I pressed on, in the face of adversity, toward a clearly defined end point. I encountered people online who helped me along the way, but sometimes left me behind -- and who I sometimes left behind. And, ever so rarely, playing this game gave me a feeling of transcendence, as though I could see all of the invisible forces that tie together everything on this earth.

Yes, I'm talking about Trials Evolution, and just because this game also made me set a new landspeed record for F-bombs per minute doesn't mean all that other shit didn't happen too. Trials is a game about balance and momentum -- about centeredness. It is a game that requires you to remember where you've been and understand where you're going, but, above all, to be in the moment. If you lose your concentration after completing a tricky part, or too eagerly attack the next section, you will fail. But if you concentrate too hard, you'll tense up and never do anything right. At all times, you must be in perfect alignment, physically and mentally.

Whereas the landscapes of Journey felt like a pretty picture that I could admire as I lurched past, I've come to know every inch of ground in Trials, and how it might help or hinder me in my goals. It requires you to develop an intimate relationship with the terrain; the land is like a living being that will respond to your every touch, however rough or gentle. I can't pretend to have mastered it, but I do know that every minor grade, every steep ascent, and every yawning chasm asks something different of me. When I hit a flawless, unbroken sequence, catching a perfect arc across a gap and making a smooth landing on a downhill slope, I feel weightless.

(When I flip over backwards immediately upon accelerating off the starting line, I feel -- well, you know.)

The power of Trials' multiplayer component has surprised me more. I'm not talking about the four-player races, whose matchmaking that could charitably be described as "unreliable." Rather, the experience of starting a race for the first time and watching my friends' ghosts bob along the course ahead of me has been unexpectedly moving. When I'm unfamiliar with a track's layout, those grey dots provide inspiration and encouragement. I note how they ease off the throttle before a particular jump, or squeeze into a narrow pathway I might not have noticed myself. During those first few runs, when I'm bellyflopping all over the place, I appreciate how all of my friends' ghosts are waiting for me at the finish line. They won't leave until I get there.

With the few friends I have playing Trials (five of them, I think), I actually find it to be sad and lonely when I beat their scores, because their ghosts no longer appear on those runs. I'm racing by myself.

(Okay, not exactly by myself. I'm also eating Jason Killingsworth's dust when he immediately blasts off, never to be seen again until I limp over the finish line. Dude is unstoppable.)

That Trials bundles all of this stuff together in such an unpretentious package -- you are, after all, just kicking ass on a dirtbike -- only heightens the effect. This isn't a game that strains for relevance or prods you to feel a specific emotion. You regard it, as you would a mountain range or a waterfall, finding in it what meaning you will, even as it responds to you with complete disinterest. The whole experience feels almost miraculous. Hell, I'd call it unequivocally transcendental.
Posted by Mitch Krpata at 9:00 AM