Whenever a new game console is released to market, one of its key features is the control pad. Consumers look at ergonomics, button layout, and even aesthetic design, in addition to functionality issues such as the Wii remote's motion-sensitive inputs. Now, after an unprecedented year-long study, Insult Swordfighting is proud to present the results of our intensive stress test of the control pads for the three major game consoles. Today: the Xbox 360 control pad. 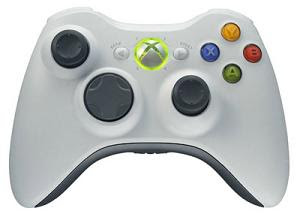 The Scenario: Wayne, on foot, battles a foe equipped with a Vital Suit and armed with missiles. The concussion of each missile blast knocks Wayne to the ground for several seconds, while the smoke from the explosion obscures his vision. By the time he stands back up, quite often he is hit with another missile, knocked down again, and god it's just so stupid.

The Stress Test: Experimenter leapt up from his chair and released the Xbox 360 controller in a sharp downward motion, simulating disgust and frustration. The pad only traveled a short distance, due to the unforeseen presence of a desk between experimenter's release point and the floor, but as compared to the Wii remote stress test, the velocity was much higher. Researchers believe total force was approximately equal.

Impact on Aesthetics: Moderate to high. The right palm grip of the control pad initially split open, and appears to have been widening slightly ever since, with the gap now centimeters wide. As a result of this asymmetry, the control pad no longer sits flush on a level surface. Worse still, it is much less comfortable to hold.

Impact on Performance: None. In more than a year since performing the test, researchers have observed no discernable loss of function in the Xbox 360 control pad -- all the more remarkable considering its grievous exterior damage. One might have suspected, at the very least, that dust and other environmental hazards might have found their way into the delicate circuitry at the controller's heart. That has not been the case.

The Verdict: Mixed. The Xbox 360 control pad scored the highest of the three controllers, by far, on issues of performance. However, it scored substantially lower on the aesthetics scale than did the Wii remote, so it's hard to call this a total victory for Microsoft's controller. Ultimately, performance matters most, but there's no denying the hypothetical embarrassment that could be caused if someone were to come into your apartment and observe a smashed-up controller that hadn't been put there for purposes of science. Even if it still works really well.

Tomorrow: The PlayStation 3 SIXAXIS.
Posted by Mitch Krpata at 9:11 AM

One variable I'm curious about: carpeted floor or wooden?

Wooden, although an area rug will come into play in tomorrow's edition.

Xbox 360 controllers are quite durable to throwing and dropping but if you get any sugary liquid in there you'll notice some sticky triggers. But it's probably the same for the Wii and PS3.

You should have played Dead or Alive 4 for this test. I can confirm that a 360 controller hitting a carpeted floor with CONSIDERABLE force can damage it beyond practical use. Right thumb stick permanently stuck in the upwards position, and wireless innards sheered off of circuit board. Although the controller would still "charge" with cables.

the reason that the 360 controller can sustain the blow the best, is because microsoft realised that the xbox is the most frustrating system. therefore they had to accomodate such protection, resulting in a "brick" like configuration for their clunky controller. This is to ensure that the controller will be the ONLY part of the system that can resist hardware failure

@ motarhedd: On the Team Ninja tip, I'm sure Ninja Gaiden 2 will help millions of gamers push their controllers to the limit.

Another handy observation: all of my attempts to twist a controller in half (by pushing down on the left side and pulling up on the right) simply result in the wireless connection disabling. At that point my game conveniently pauses and asks me to reconnect the controller which I do be simply turning it back on. This turns out to be a nice moment of reflection, and I typically realize I should turn the console off.