The ship is sinking! Get out!

In the past few months, I've played three games in which my characters had to flee a sinking military vessel within a certain time limit. For whatever reason, sinking ships are the new hotness -- the 3D equivalent of the collapsing bridge in old-school platformers. You know, where you ran across as pieces of the bridge tumbled away beneath you.

Above: The bridge is collapsing! Go go go!

Which is to say that it's not usually all that surprising or fun, escaping from sinking ships. Some games do it better than others. From worst to best, here are the sinking-ship sequences I've played recently. 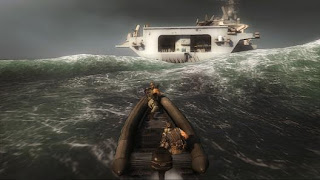 Above: "I'm gonna sink this bitch."

The biggest problem with Army of Two's ship-sinking sequence is that half of the cool stuff happens offscreen. The aircraft carrier is loaded with nuclear warheads that could fall into the wrong hands unless our intrepid duo -- you guessed it -- sinks the ship, and detonates the explosives underwater. There's a little cutscene where you push the warheads onto an elevator, and then suddenly you appear on the flight deck with a minute to run to a lifeboat. Not only do you need only about twenty seconds to make it, but the only obstacles are a bunch of shipping containers that appear from the ether and tumble toward you. It's bush league. You hear me? Bush league. 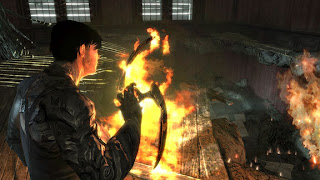 Above: Not a sinking ship. Thanks for nothing, Google Image Search.

Dark Sector's sinking ship sequence plays out a bit better than does Army of Two's -- but on the downside, it happens in the game Dark Sector. Here, you have ten minutes to escape a sinking ship, and it may be a sign of how muddy the storytelling is that mere days later I cannot recall what I was doing on the ship or why. To escape, you have to solve a few puzzles using the glaive's "aftertouch" ability, steering it around corners and through gaps in fences and whatnot, all while fending off a bunch of brainless mutants.

The biggest problem, like much of the game, is that the puzzles aren't integrated well into the game. Why would a ship have doors that can only be unlocked by hurling an electrified boomerang at them? It just doesn't make sense. Plus, they tried to increase the drama by having the ship spring leaks all over the place, but the leaks are all identical: they're all at the same height on the walls, they all spray the same amount of water, and they're usually evenly spaced along your path. It's not good when these things call attention to themselves. 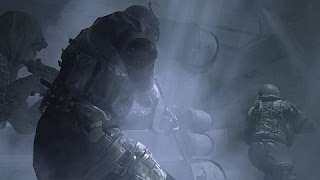 Above: Sinking?! I did NOT see this coming!

As I've said before, Call of Duty 4 is awesome, and the funny thing is that it doesn't do anything that hasn't already been done in other games. It just does everything so much better -- including sinking a ship.

Once again, I don't really remember what we were doing on the ship, although I think it had something to do with retrieving some vital documents. What matters is that the escape is executed brilliantly. The ship lists to one side, with the controls providing just the right amount of resistance, and various committed foes take potshots at you. In the Call of Duty way, the whole sequence is a sensory overload. I felt something like panic my first time through, particularly when I lost sight of my squad and found myself charging blindly down corridors -- the wrong corridors, as it turns out. It was to be the first of my approximately seven thousand deaths over the course of the single-player campaign.

In conclusion, if you really want to escape from a sinking ship, do it in Call of Duty 4. Or, more likely, do it in every game for the next five years, until somebody comes up with a better idea and suddenly you're making one hang-glider escape after another from mountaintop fortresses.

Let's all take a moment and say as one : "Call of Duty 4 is awesome"

Call of Duty 4's ship escape was exciting, but I think the crown should go to Dark Forces II: Jedi Knight. After the final decision is made as to whether you choose the light side of the Force or the dark side, you find yourself in a gigantic ship falling down a cliff. The goal is to get to your tiny ship docked at the end of the level. The whole area is shaking violently, there's no real floor or ceiling since everything is tilted so badly while falling. You have only a few minutes to get through, find the switches to allow you access to your ship, and escape. It was unlike anything I had seen before and it was harrowing, exciting experience rushing through the level.

Sean beat me to the punch.

I'd also like to give a call to DFII's amazing level design for that one. They even managed to give the player continuity and training, because one level has them make their way through this ship. The level Sean references then makes them backtrack their steps again. It has been a while since I played the game, but I'm pretty sure the two levels are a close or exact match in terms of their architecture.

let's not forget Halo too...

pretty much every game, Master chief is escaping some kind of ship [ space ship] that's bound to be destroyed...

it kinda falls in the same categoy i guess...